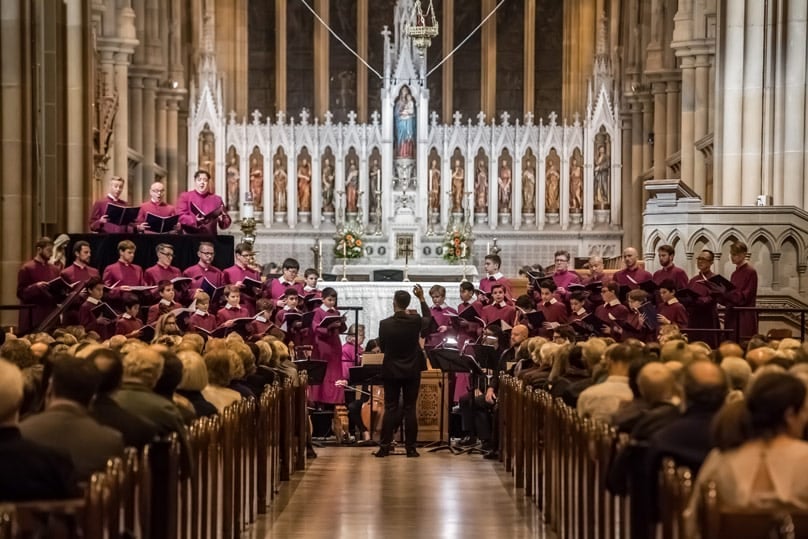 Few 12-year-olds can say they have had a dream come true at such a young age, but Benedict Vassallo is one of the very lucky few.

The Year 6 student from St Mary’s Cathedral College has been in Rome to sing for Pope Francis before a worldwide audience of millions.

Benedict is one of 32 boys from the school currently on tour with the Cathedral Choir, which is celebrating its 200th anniversary this year with these once-in-a-lifetime performances to mark the milestone.

The choir performed at the 12th International Gregorian Festival of Watou, Belgium, as well as a solemn performance at the Last Post ceremony at the Menin Gate Memorial in Ypres, which is dedicated to the British and Commonwealth soldiers killed in World War I.

But it’s the performance for the Pontiff which has really got Benedict pinching himself.

“I am just so excited, I can’t believe it’s all happening,” he beamed.

“I have never been on a plane which is pretty exciting on its own but singing for the Pope in Rome is unbelievable.

“Singing is all I want to do, I have been doing it since I was about two and people say I sing like an angel.

“I want to make singing my career so being able to say I sang for the Pope is pretty cool.”

The tour is logistically one of the biggest events undertaken in the choir’s history.

And while the trip is an incredible opportunity, Director of Music Thomas Wilson, said it also requires a lot of dedication, sacrifice and hard work.

“Learning and singing new music every day takes a lot of hard work and persistence,” he said.

“The boys sing every morning before school as well as a couple of afternoons after school so they give up other things including sport to do it.

“So I’m hoping the tour and in particular the Papal Mass will make up for all the sacrifice and it will be something they will never forget.

“This tour is really about connecting with our roots, on several levels. To share our uniquely Australian way of interpreting ancient European sacred music with concert audiences, Church congregations and even the Sistine Choir.”

The St Mary’s Cathedral Choir began in 1818 when Irish woman Catherine Fitzpatrick uprooted her young family and undertook the journey from Ireland to Australia in order to be near her convict husband.

She began training a newly-formed choir of boys – consisting mainly of her own sons – to sing European Sacred Music in the then fledgling colony of New South Wales.

UPDATE: St Mary’s Cathedral Choir performed at the Papal Mass for Pentecost Sunday on 20 May. Click here to view the Mass.