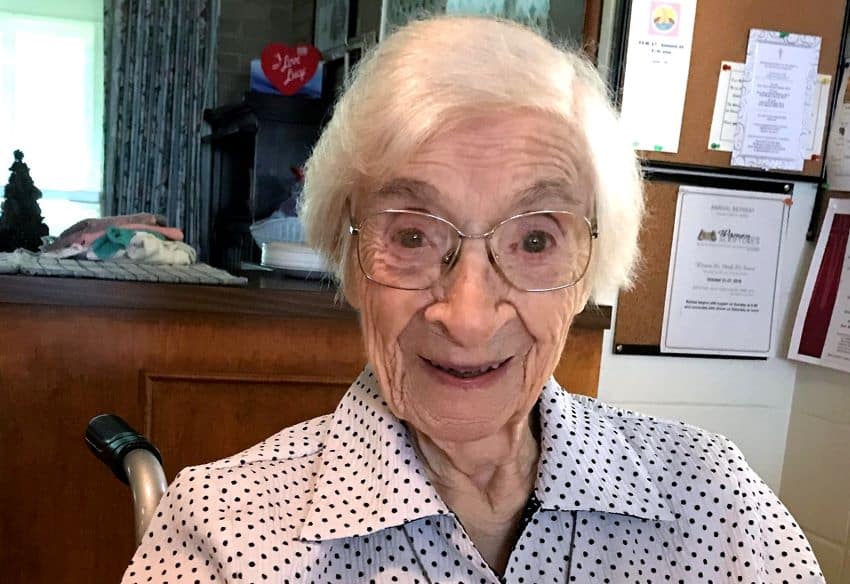 US Mercy Sister Mary Aidan Donaldson worked in education for almost 50 years, and that wasn’t nearly half her life story.

The eldest Sister of Mercy in the world and possibly the oldest living religious died on 25 October at the age of 111 at the Convent of Mercy retirement home in Mobile, Alabama.

She arrived in Mobile from her native County Down, Northern Ireland, during the Great Depression in 1929 and influenced generations of people throughout her assignments, mostly in Alabama.

“You wouldn’t be able to count how many people she’s touched,” said Mercy Sister Carolyn Oberkirch, who lived with Sister Donaldson for 24 years. “What a full life she led all these years. What a good religious she was.”

She was known as the “official greeter” for the convent during her retirement years.

“She loved everybody and she loved for people to come in,” Sister Graf told The Catholic Week, newspaper of the Archdiocese of Mobile. “She sat (in the living room) most of the time when she felt good.”

Sister Donaldson did her best to stay young at heart. In her 80s, she attended religious education classes at the University of Notre Dame and also took up watercolour painting. She received a computer for her 100th birthday and games on it, thanks to a game subscription service. Her favourite was mahjong, according to Sister Oberkirch.

That 100th birthday in 2008 turned out to be quite festive. Sister Donaldson relished a good time and her birthday included a party with mimosas and breakfast in the morning, followed by a nightcap bash at the convent where “400 people came through those doors,” Sister Oberkirch said.

“I don’t know how she did it,” Sister Oberkirch said. “She never sat down in the morning. I got worried. But she loved the attention. And she had two dresses — one for the morning and one for the evening.”

Sister Graf said she was known for “being a lady. Very prim and proper.”

Sister Donaldson also was a dedicated reader and was often found reading the news of the day. “She was a person who was interested in everything. She was always reading a newspaper or magazine. And she was always ready to accept new things and she was a go-person,” Sister Graf said.

Go she did in 1929 after Religious Sisters of Mercy from Mobile visited Northern Ireland. Sister Donaldson said she “didn’t know where (Mobile) was on the face of the earth,” in a 2010 Mobile Press-Register story.

A call from God

But she added, “When I thought about it I said, ‘Well, I did commit myself to God and whatever he wanted was what I wanted.’ I had been thinking of nursing when I got the call from these two nuns. But it wasn’t a call from them. It was a call from God when I made up my mind.”

Her first assignment was as a teacher at St Joseph School in Mobile, but much of her time was spent as a teacher and principal at St Ignatius in Mobile. She also taught at St Mary, Convent of Mercy and St Joan of Arc in Mobile; in Huntsville, Birmingham and Bessemer, Alabama; Pensacola, Florida; and Baltimore before moving into parish ministry in 1978.

As a teacher, the petite Sister Donaldson was known as being tough, but fair.

“She was formidable. There was just something about her that called for respect,” Sister Oberkirch said.

Sister Donaldson’s most famous student was singer Jimmy Buffett, who had sent her birthday cards during her retirement years.

Although Sister Donaldson lived to 111, she had hardships. Her mother died when Sister Donaldson was an infant and her lone brother died only five months after birth. She attended a boarding school while her father worked in the railroad industry.

In 1938, Sister Donaldson contracted tuberculosis and spent two years in a sanatorium and hospital.

“This is a lady that suffered a lot when you think she was out of commission that long,” Sister Graf said. “But she lived to 111. She had weak lungs, but she was amazing.”

Archbishop Thomas J. Rodi will celebrate the funeral Mass for Sister Donaldson on 4 November at St Ignatius Church in Mobile.