Mathematics at St Patrick’s College Sutherland is really taking off.

In a departure from the classroom, Year 8 students have taken their studies to Sydney Airport learning everything from Pythagoras, mapping, speed and distance calculations, currency and foreign exchange rates.

In a first for Sydney Catholic Schools, the students are being taught all aspects of maths using the airline industry.

Then it’s on to the terminal for some retail therapy. Students arrive at the airport as “international travellers” with a fist-full of virtual dollars from their “home country”. Students then find the exchange rate for their local currency and calculate how much they will need to purchase $1000 Australian dollars.

Once they have made the virtual transaction, they are free to roam the airport and make three purchases in Australian dollars which they must photograph and record before working out how much they will receive once they sell their remaining Australian dollars back. 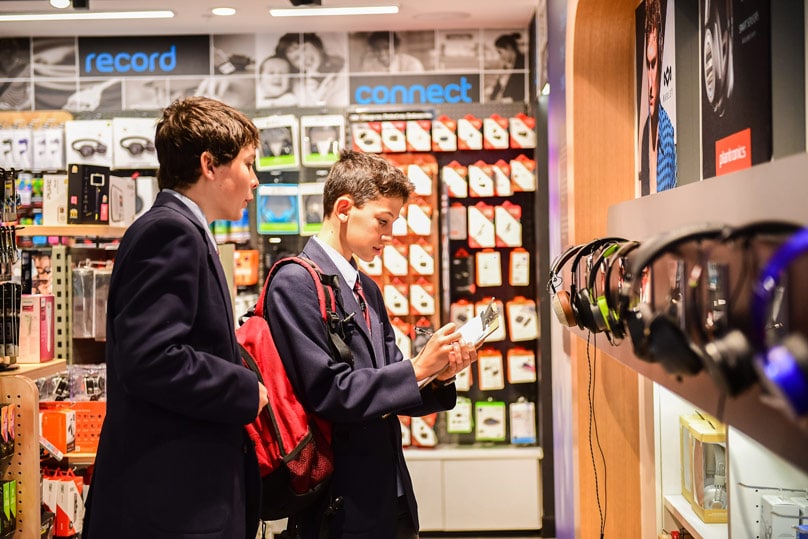 Despite some initial turbulence among a few shopkeepers worried they were being sent in to check out competitors prices, the students all agree the program is a great way of teaching maths in a practical way while learning necessary life skills at the same time.

Program creator and maths teacher Rick Joyce said he is simply using something in the student’s backyard to teach the basics of maths.

Student Julia Caraffa, who has holidayed in the United States and New Zealand, said she had never previously given much thought to exchange rates, currencies and how they relate to her maths studies.

And she said while it was refreshing to get a break from the classroom, it was interesting to see firsthand why learning maths was so important once they leave school.

“We all complain that some of the work in the maths syllabus is irrelevant, but excursions like this shows us why it is actually important and how we will need it when we leave,” she said.

“Having the chance to walk around the terminal and use what we’ve learnt in the classroom helps make it all make much more sense.

“During our virtual shopping tour we also learnt that the more money we cashed back the more we made in our own currency.

“That’s a tip I’ll be teaching my mum next time we travel.”

Mr Joyce said in an age where many of his students have travelled more extensively overseas than in their own country, he is using the terminal and travel to teach what can be at times a little mundane.

“Not only have most of the students travelled, but they live under a flight path and listen to aircraft fly overhead everyday so I am using something they are all familiar with to make their studies more interesting,” Mr Joyce said.

“The skills learnt on the field trip are invaluable, bringing mathematics to life while teaching the kids some skills needed in life.

“Ninety per cent of students in the class have travelled overseas yet very few had any idea of exchange rates, so it’s a great way of teaching financial maths, a core element of the syllabus.

“We are using the airline industry – something of interest to most people – to explain some core parts of the work.”