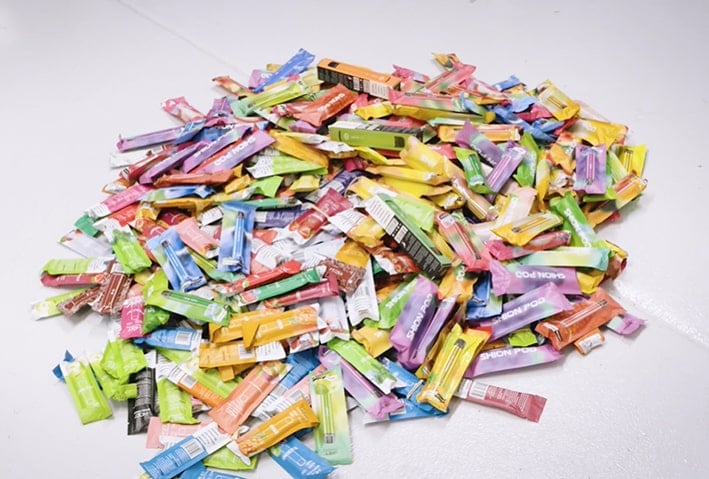 Parents and young people should be in no doubt that not only do e-cigarettes and similar products pose a serious threat to young people’s health but they are also highly addictive, said a leading Sydney expert as NSW Health rolled out a massive anti-vaping campaign highlighting the dangers.

Psychologist James McLennan, a state-wide smoking cessation training coordinator based at St Vincent’s Private Hospital in Sydney, told The Catholic Weekly that he is concerned that young people, their friends and parents may not realise just how dangerous vape products can be and how aggressively they are marketed by unscrupulous operators to a youth market.

Recent years have seen an explosion in sales of disposable e-cigarettes and pod devices containing cocktails of chemicals.

“Sweet-scented and flavoured products in brightly-coloured packaging still appeal to teenagers and even children who mistakenly believe that vaping is a safer alternative to smoking cigarettes”.

Production is unregulated but studies have revealed large doses of nicotine and flavour additives, chemicals used in weed killer, nail polish and disinfectant as well as traces of metals such as copper and arsenic.

Since last October, vape products containing liquid nicotine can only be legally purchased from chemists with a doctor’s prescription, for the purpose of quitting smoking.

But sweet-scented and flavoured products in brightly-coloured packaging still appeal to teenagers and even children who mistakenly believe that vaping is a safer alternative to smoking cigarettes.

Mr McLennan told The Catholic Weekly that despite attempts by the Therapeutic Goods Administration and governments to stem the flow of the products to youth, “my own children tell me that nothing has changed, that if you want them you can get them”.

“There’s a whole range of ways of accessing these products without going to a doctor and getting a prescription for them,” he said. “Young people use them like they would experiment with anything, thinking they’ve got a handle on it and that it’s not as bad as smoking, but they’re becoming very dependent on these products.

We believe that kids are getting a larger hit of nicotine, particularly from the more recent devices, than with regular smoking, and they are getting overdose-type symptoms.”
James McLennan

“We believe that kids are getting a larger hit of nicotine, particularly from the more recent devices, than with regular smoking, and they are getting overdose-type symptoms.”

Since January, police have seized more than $1 million worth of illegal e-cigarettes and liquids containing nicotine illegally sold through retailers such as tobacco shops, vape shops and corner stores across the state, while NSW Health is also cracking down on the sales of vapes labelled as non-nicotine to minors.

“People think they are simply flavoured water but in reality, in many cases they are ingesting poisonous chemicals that can cause life threatening injuries,” she said.

A spokesperson from Sydney Catholic Schools told The Catholic Weekly that students are made aware of the serious health issues surrounding vaping and e-cigarettes through the current PDHPE syllabus, and parents have also been encouraged to have conversations with their children at home.

“People think they are simply flavoured water, but in reality, in many cases they are ingesting poisonous chemicals that can cause life threatening injuries” Dr kerry chant, nsw chief health officer

“Education about the effects of smoking, drugs and alcohol is essential to ensuring that our young people make safe decisions and take personal responsibility for their actions,” the spokesperson said.

One principal at an inner city primary school said that the staff are aware vaping is a problem even among teenagers and pre-teens.

“Vaping is very attractive to young teens. We know of children as young as 10 vaping regularly on the weekend and many other children who have tried it,” the principal said.

“They find the flavours appealing and don’t appear to be aware of the health implications.”
Mr McLennan said a big unknown was the effect of inhaling additives that are designed to be used as food flavourings.

“One international study showed there were 155 chemical flavour additives found in these devices. Kids are being sold on them being bubble gum flavour or cherry flavour and so on but some of these so-called flavours are toxic, some are known to be irritants and some are known to be essentially environmentally dangerous.

“Almost certainly some kids are getting reactions to inhaling these chemical flavours.
“Because these are unregulated products it’s impossible for us to know first how much nicotine is in these devices, and what else you’re consuming when you use them, that’s what it boils down to.”

Kira Rosch, a parishioner at All Saint’s Parish, Liverpool, said she is concerned for young people who use the devices thinking they are only inhaling “flavoured air”.

“because these are unregulated products, it’s impossible for us to know how much nicotine is in these devices and what else you’re consuming when you use them”.

“For kids they should be treated the same as any possibly addictive substance, like alcohol and regular cigarettes because clearly there is a dependence factor with them,” she said.

“And anything you ingest is going to have an impact on you.”