We may never have had two Catholic universities in Australia had it not been for the pioneering zeal of a humble Dominican priest, Fr John Neill OP who is being remembered fondly in educational circles across the country, following his death last Saturday at the age of 89.

Fr John’s pivotal role in the establishment of both the Australian Catholic University and the University of Notre Dame Australia is being remembered by senior leaders from both universities, fondly remembering his visionary leadership and decades of passionate advocacy for Catholic education.

Born in Randwick and a child of the Great Depression, Fr John left school early to work in a department store and later completed his Leaving Certificate at night school. These early struggles no doubt nurtured his own passion for the importance of education which stayed with him throughout his life.

He joined the Dominican order in 1955 and was ordained a priest in 1960. Fr John was a born teacher, first as Prior and then Master of Students at St Dominic’s Priory in Melbourne and then as a teacher and later headmaster of Blackfriars Priory School in Adelaide from 1972 to 1988.

He quickly stepped up into state and national leadership roles, serving for a time as Chair of the South Australian Commission for Catholic Schools, a member of the Standing Committee of the Headmasters Conference of Australia and as a member of the National Catholic Education Commission.

However he is perhaps best remembered for the pivotal role he played in the foundation and governance of both ACU and UNDA in the 1980s and 1990s, opening up a tertiary Catholic education to generations of students across Australia.

Close friend and fellow Dominican priest, Fr Dominic Murphy OP, said Fr John saw first-hand the great potential to use the then struggling St Benedict’s parish in Broadway as the site of a new Catholic university, which is now the Sydney campus for the University of Notre Dame Australia.

“He really seized the opportunity to breathe life into that parish through setting up a new university campus there in inner Sydney and that was the beginning of a journey over many decades which included a long period as a university chaplain”, Fr Dominic told The Catholic Weekly after hearing of Fr John’s death.

“Cardinal Pell said very clearly to him that Sydney was big enough for two Catholic universities and John was very much the quiet man who made it all happen”.

“John always looked for the good in people and was an eternal optimist in everything he did. He was a natural gentleman who loved the arts, especially film, movie and theatre and had such a strong pastoral dimension to him that marked his decades of work in education, all focused firmly on building up God’s kingdom”.

Fr Neill was a true pioneering father of UNDA, serving as the Director of its Planning Office as far back as 1988 that preceded its formal foundation in the following year.

He later served as Trustee and Governor of the university from 1996 to 2009 and was a familiar face and comfort to countless students as university chaplain of its Sydney campus.

The university’s Vice Chancellor, Professor Francis Campbell, said Fr Neill’s contribution to the university will be treasured for generations to come.

“Fr John made such a unique and rich contribution to our university- to its very creation and growth and Fr John was one of those visionary leaders who stepped forward to create what we have today”, Professor Campbell said.

“Even after his formal association with ACU ended, Fr John maintained an active and engaged interest in the life of the University and remained a passionate advocate for the mission of ACU and the role of Catholic higher education more generally in the Australian tertiary sector.”

“He was one of our assistant chaplains until very recently and just last year we celebrated the diamond jubilee of his priestly ordination.

“We are greatly saddened by the loss, but are thankful to have known Fr John and to have benefited so much from his love and commitment”.

That same pioneering vision and spirit marked Fr Neill’s contribution to the establishment of Australian Catholic University in 1991.

Vice Chancellor Professor Zlatko Skrbis this week praised Fr John’s leadership as a foundation Member of the Corporation that chartered ACU, later also serving as a member of the University’s governing Senate from 1992 to 1998. 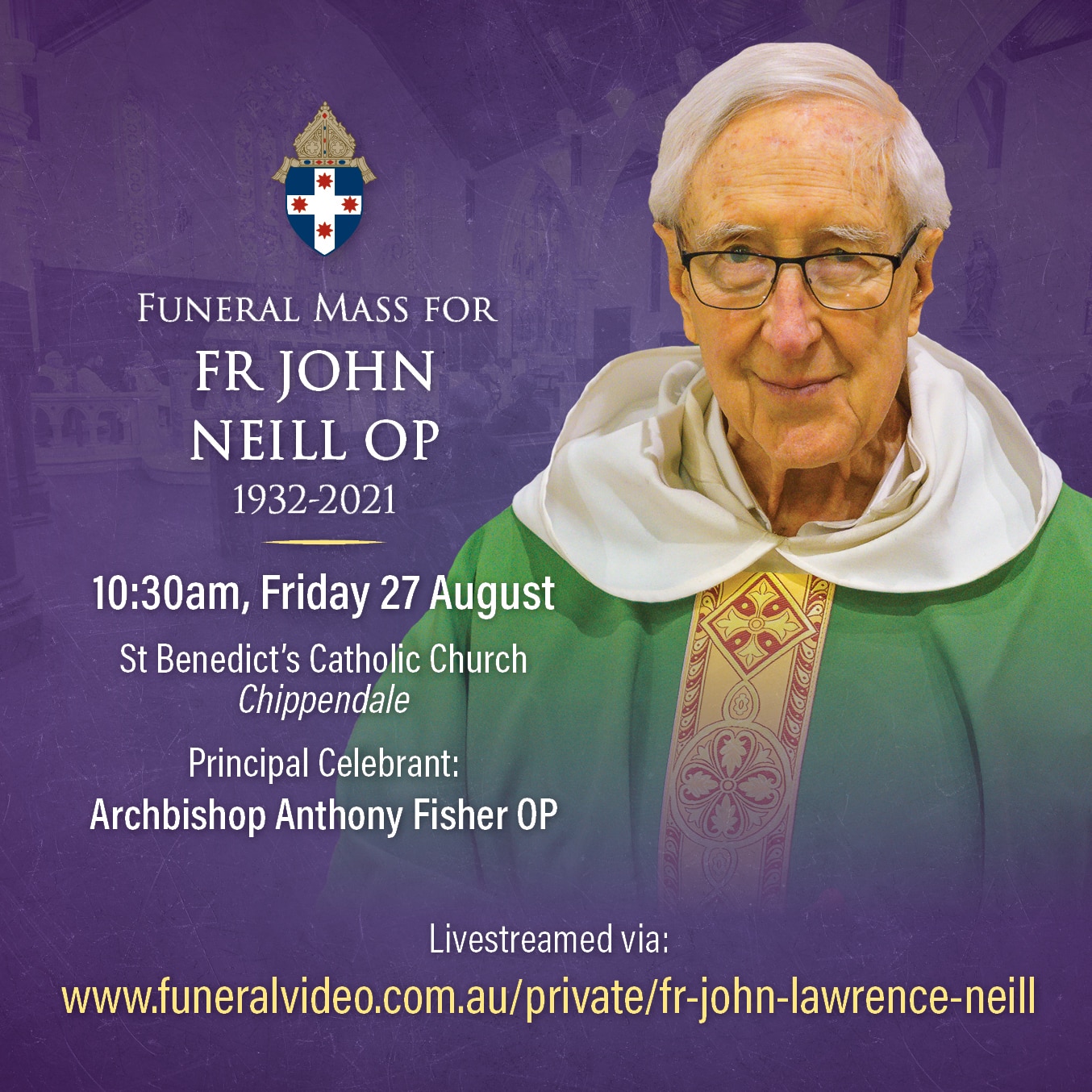 “He brought to these roles his extensive experience in Catholic education, deeply influenced by his Dominican charism and always ensuring the foundations of ACU were firmly anchored on the heritage and traditions of the University’s predecessor colleges”, Prof Skrbis explained.

“Even after his formal association with ACU ended, Fr John maintained an active and engaged interest in the life of the University and remained a passionate advocate for the mission of ACU and the role of Catholic higher education more generally in the Australian tertiary sector … He impacted the lives of many staff and students at the university in its foundational years, an impact that continues to resonate today in the mission and values of ACU that he worked so passionately with others to instil at the university’s establishment in 1991”, he added.

Fr John’s contribution to Catholic education for over half a century has been acknowledged through numerous civic and Church honours.

The University of Notre Dame awarded him an honorary doctorate in 2006, he received a Papal Award (Croce pro ecclesia et pontifice) in 2012 and an Order of Australia medal in 2014.

Throughout his many years of service, Fr Neill never lost sight of his Dominican charism and in turn inspired many fellow Dominicans, including Archbishop Anthony Fisher OP.

“We are greatly saddened by the loss, but are thankful to have known Fr John and to have benefited so much from his love and commitment”.

“He was for a time my religious superior; I knew him as Master of the young Dominican students in formation for the priesthood; most importantly I knew him as a fellow Dominican. The Second Vatican Council declared, following the teaching of St Thomas Aquinas, that religious life is supposed to be a school of perfection in charity. To be honest, it doesn’t always work: but in Fr John’s case I truly believe it did. Requiescat in pace dear father and brother”, the Archbishop wrote in a personal tribute.

Archbishop Fisher will be the principal celebrant at a Funeral Mass for Fr John Neill OP at the church he loved so dearly, St Benedict’s Chippendale on Friday 27 August at 10:30am.

Due to COVID-19 restrictions attendance at the Mass will be strictly limited, but was due to be livestreamed.

The life of this remarkable priest and educator is honoured in a one hour documentary, The Quiet Man – introduced by ABC broadcaster, Geraldine Doogue.