Last month, the UK Girl Guides opened their membership to any “person who self-identifies” as a female. Julie Bentley, Chief Executive of Girlguiding previously praised the Guides as “the ultimate feminist organisation.”

This comes after National Geographic published a special issue of the iconic magazine, themed the “Gender Revolution” and featuring Avery Jackson, a 9 year old transgender girl on the front cover, sporting long pink hair and an all-pink outfit.

The magazine attempts to normalise gender dysphoria through the emotional stories of several gender non-conforming individuals across the globe.

In one article, author Robin Marantz Henig describes a teenage girl planning to transition into a male: “She has always felt more boyish than girlish. From an early age, E, as she prefers to be called for this story, hated wearing dresses, liked basketball, skateboarding, [and] video games.”

Bruce Jenner, now famously known as Caitlyn Jenner, said of his transition that “the hardest thing about being a woman is figuring out what to wear.”

To tell the truth, every woman should feel insulted by such remarks, which reduce femininity to mere physical appearance and a preference for traditionally feminine activities – femininity as seen through a man’s eyes. Yet the transgender lobby continues to push this type of narrative.

Unsurprisingly, they have been vilified for their “transphobic,” “outdated” and “bigoted” views. It is disturbing that men, wishing to be recognised as female, are singlehandedly redefining the feminine identity and silencing any woman who rejects these infringements on their own sex.

What could be more misogynistic than this? But why aren’t other feminists jumping to their defence? Where are the women who so furiously marched against President Trump’s attitudes towards women? Where are they now with their “No Uterus, No Opinion” signs?

No doubt, some are afraid to face the wrath of the LGBT community. However, many remain absent from the debate because, in fighting for women’s rights, they hold that there are no biological differences between men and women. Therefore, they cannot defend their womanhood without admitting that the sexes are indeed distinct.

Consequently, this has reduced the definition of what it means to be a man or woman to shallow understandings of gender. That is: “I think I am a woman because I like fashion and pretty things.”

The body then becomes a mere entity forced to conform to the sex that one “identifies” with. Erasing biology, which is a crucial aspect of our womanhood, has allowed the transgender movement to hijack our feminine identity.

Bruce Jenner will never experience what it truly means to be a woman. No amount of cosmetic surgery and cross-sex hormones will help him achieve that. He will never deal with a monthly menstrual cycle, feel new life grow within him, bear the historical weight of inequality or carry a deep sense of pride in our victories for women’s rights. And yet, there is so much more to womanhood. As Diane Mariechild beautifully wrote, “A woman is the full circle. Within her is the power to create, nurture and transform.” No man can ever partake in the mystery of feminine identity.

I do not doubt for a second that, deep down, Jenner and Jackson know this. And that will forever be their tragedy: men can never become women, and women can never become men. “Rather, they become feminised men or masculinised women,” according to Dr Paul McHugh, former psychiatrist in chief at Johns Hopkins Hospital, the originators of sexual reassignment surgery. They have distorted their bodies to pursue a lie.

It is heartbreaking that some men and women have subjected themselves to such aggressive and radical medical procedures, because they feel that they cannot live up to society’s unrealistic standards of masculinity and femininity.

That doctors and health professionals have encouraged such measures to be undertaken is to be deplored. We have collectively failed as a society to help those who experience gender dysphoria to love and celebrate the beautiful bodies and unique personalities they have all been gifted with.

We must not let the LGBT community bully us into complying. As women, we have the right to protest against the view that our bodies no longer matter.

We must call on society to uphold our right to privacy and protect against men invading our bathrooms, change rooms and any other designated spaces for women and girls. In doing so, we must take care to treat transgender individuals with the utmost dignity, love and respect. But that does not mean we must play along with the charade.

Feminists must wake up and set their differences aside to defend the dignity and rights of women. For as Virginia Woolf insightfully warned: “Anything may happen when womanhood has ceased to be a protected occupation.” Quite literally, it has. 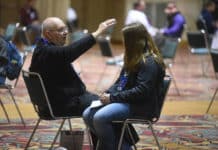 Joseph’s story: welcomed into the Church as a same-sex attracted man