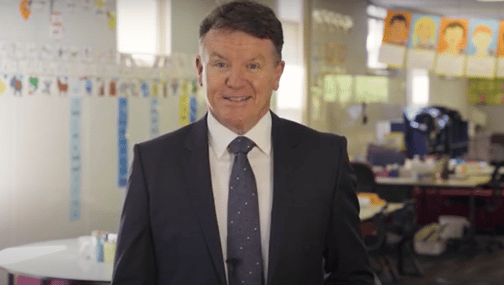 50 years on from his first day at the St. Mary’s Campus of Marist Catholic College North Shore, Sydney Catholic Schools Executive Director Tony Farley has gone back to Primary School.

“There are not many institutions that survive 200 years,” said Mr. Farley, “and fewer still that are thriving.

“A lot has changed in 200 years and yet the Catholic Church’s mission in education has remained the same, to come to know and love Christ through learning.

“the Catholic Church’s mission in education has remained the same, to come to know and love Christ through learning.”

Returning now as the head of the Sydney Catholic Schools system, Mr Farley took the opportunity to catch-up with his old teachers Sister Kathleen and Sister Margaret, as well as old friend and fellow student George Germanos.

“50 years ago I arrived at this school as a very small boy, and was greeted by Sister Kathleen and Sister Margaret, along with other sisters and a handful of lay teachers,” said Mr Farley.

“It’s an honour, and with great emotion, that I find myself back here at the same school I arrived at in 1971 with Sister Kathleen and Sister Margaret to see how the school has changed and talk to them about their lives and work.”

Mr Farley then interviewed his old teachers to ask them about their time at the school. To see the video and hear about the rest of the celebrations, check out the video below from Sydney Catholic Schools.

Students Sleep Out for Those Doing it Tough

Beat COVID anxiety and stress: Why you should get vaccinated

Pat Garcia - July 13, 2021
With school returning this week, it’s a stressful time for Sydney parents. We're all navigating territory I think we all assumed we left behind...

Fr Richard Waddell: Traces of God in the night sky

Love in the lockdown

Dr Philippa Martyr: On the usefulness of buzzwords

The Chosen series for Lockdown