While the cultural meaning of Christmas is now about the offering of gifts and the celebration of family gatherings, its religious essence rests on an ancient tradition that abounds in paradoxes.

A paradox is the expression of two truths that are apparently contradictory but, when affirmed together and held in balance, provide a deeper understanding of reality.

Few authors have probed the paradoxes of Christmas more deeply than GK Chesterton.

From his earliest years he saw the Incarnation as a stunningly unique event. It was the personal involvement of God in history as a little child who formed an intimate part of a human family.

The first paradox highlighted by Chesterton was that Christmas combines two contrasting realities – those of supremacy and vulnerability. He explained this paradox in the great work of his maturity, The Everlasting Man (1925):

“Any agnostic or atheist whose childhood has known a real Christmas has ever afterwards, whether he likes it or not, an association in his mind between two ideas that most of mankind must regard as remote from each other; the idea of a baby and the idea of unknown strength that sustains the stars.

“His instincts and imagination can still connect them, when his reason can no longer see the need of the connection; for him there will always be some savour of religion about the mere picture of a mother and a baby; some hint of mercy and softening about the mere mention of the dreadful name of God.”

In his picture of reality, Chesterton linked these two seemingly unconnected, even opposing, ideas – God and a child, divinity and infancy, omnipotence and vulnerability, creation and helplessness.

“Bethlehem,” noted Chesterton, “is emphatically a place where extremes meet.” It is the birthplace of a child, at once divine and human, at once all-powerful and powerless.
In one of his final poems, Gloria in Profundis, Chesterton captured the power of God the Father yielding to the powerlessness of His Son as a child in a manger: “Glory to God in the Lowest.”

This paradoxical truth becomes clearer as we think about the sharply different realities that can excite our interest and inspire our love – on the one hand, the experience of awe at the created universe, such as a vision of the stars twinkling in the night sky; and on the other, the response of affection as we gaze upon the most delicate creation, a child in the crib, utterly dependent on those who have brought it into being and care unconditionally for it.

The British theologian John Milbank has pointed out that Christian teaching reverses the traditional approach to pedagogy. It proposes the child as the teacher of the adult. God becomes incarnate as a child – and then as a child, he instructs the learned, beginning with the Elders in the Temple.

The Gospels reveal again and again the singular importance and value that Christ attached to childhood. On the occasion, for example, when children were brought to Him but then turned away by the disciples, Christ called them back:

Such teachings point to a second paradox about Christmas that Chesterton perceived – that is, the innocence of childhood. This is not the innocence readily associated with naivety and a lack of experience – or, as St Augustine once put it, a lack of opportunity.

It refers, instead, to the condition of spiritual childhood and creaturely dependence with which we began our lives, and are continually called to recover as an adult. The theologian Hans Urs von Balthasar explored the meaning of Christ’s call that we become like little children. It is the experience of childlikeness, he believed, not of childishness.

It is a realisation that adulthood, which we can so easily equate with earthly success and status and self-sufficiency, is often at odds with our fundamental life as a child – a creature dependent on God.

Childlikeness endows us with wisdom about the pathways to eternal life. It places in perspective our earthly attainments which will wash away. It confronts us with a challenge – to rely on God’s wisdom and mercy rather than our own abilities and ambitions.

What are the spiritual qualities of childhood which Christ exalted as a model for those aspiring to Heaven, and which gave rise to the paradoxical insights of Chesterton? They are such things as a sense of wonder at creation – and its impenetrable mysteries; a natural honesty and innocence (children have not yet learned to dissemble – to be one way and to act another); a simplicity of spirit and humility of heart; a deep and untroubled sense of dependence; and a capacity to live acceptingly in the present.

These are among the most vital qualities of childhood, and they tend to fade as the years pass and the trials and betrayals of life take their toll. Yet they reflect, as Chesterton and other Catholic writers have made clear, such as the French novelist Georges Bernanos and poet Charles Péguy, an instinctive right relationship to God.

Christ’s statements make clear that the qualities of a child are an image of our supernatural condition and calling, and that upon a childlike attitude – preserving it in adult life, or recovering it to the extent it is lost – rests our salvation as adults.

In present-day culture, it is childishness, not childlikeness, that is being fostered and indulged. The New York Times film critic, A.O. Scott, has observed that contemporary movies and TV shows mark “the death of adulthood”, since they promote “an essentially juvenile vision of the world”. As a result, “nobody knows how to be a grown-up anymore”.

Citing a TV period drama, Mad Men, about the characters in a New York City advertising agency in the 1960s, Scott sees the collapse of male authority in our culture – and a declining respect for the best qualities of masculinity. Today’s programs typically present “adolescent heroism” and “comedies of arrested development”.

Scott is ambivalent about these trends, as he does not want to be seen as mourning the loss of what he calls “patriarchal authority”; but he acknowledges that the changes have effectively “killed off all the grown-ups”, and have had an infantalising effect on our culture.

The softening of an assertive masculinism may well be of social benefit, but the diminished appreciation of traditional male qualities – such as physical courage, a willingness to take risks, and a spirit of staunchness between friends (in Australian terms, “mateship”) – has significant implications as well, not least in how our culture projects for boys compelling images of fatherhood and male responsibility.

There is, no doubt, a spiritual interdependence between fatherhood and childhood. The paradox of Christmas is that of a Father sending His Son to save the world. This has a profound resonance for all of us. As Chesterton put it:

“Christianity seeks after God with the most elementary passion it can find – the craving for a father, the hunger that is as old as the hills. It turns the whole cry of a lost universe into the cry of a lost child.” 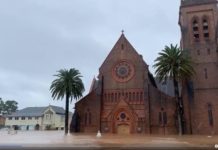