Sydney is officially the most Catholic city in the country with the largest percentage of people identifying as Roman Catholic.

Latest figures reveal that of the 650 Sydney suburbs, Bossley Park is Australia’s most Christian and Catholic, with 7,288 Catholics accounting for a whopping 49.9 per cent of residents – almost half the entire 14,585 population.

Located 36 kilometres southwest of the CBD, its residents are more faithful than Sydney’s traditional Bible-belt district of The Hills, highlighting the growing trend of Catholics heading out west.

Market demographers McCrindle recently conducted the Faith and Belief study using the latest Australian Bureau of Statistics Census figures, which showed that while “no religion” was the most popular response when it came to the question of faith around the country, Sydney is the only capital city where Catholicism is still the No.1 religion.

Study author Mark McCrindle said: “Religion in Australia is certainly not dead. Our study shows that two thirds of Australians (68 per cent) currently follow a religion or have some spiritual beliefs.

“And Sydney is undoubtedly the last bastion of Catholicism in Australia and it should be proud.”

Bossley Park comes in at No.10 – however it claims the title of being Australia’s most Catholic suburb due to the high percentage of the population identifying as being of the faith.

The Census revealed “no religion” as the most popular response when it came to faith nationally with 6.9 million responders (29.6 per cent of the population), followed by Catholicism with 5.3 million (22.6%) and Anglican with 3.1m at 13.3 per cent.

In breaking down the Census data, the Faith and Belief study found Australia-wide there are about 5.3 million Catholics – 22.6 per cent of the country’s population with 1.8 million living in NSW (24.7%) and of those 1,213,126 live in Sydney giving the NSW capital the top spot.

The capital city with the second strongest Catholic response was Canberra (23.8%) while Hobart ranked last (17%).

Despite Sydney leading Australia as the city with the highest percentage of Catholics, that proportion has been declining over the past decade from 29.1 per cent in 2006 to 25.1 per cent today.

Sydney’s population increased by more than 420,000 from 2011 to 2016 but over the same period, there was a decline of 28,000 Catholics.
Mr McCrindle said that while the falling number of people of faith was alarming it wasn’t all doom and gloom.

He said the findings were a great opportunity for Sydney Catholics to identify what its congregations wanted from their parish and priests and build on that to retain its numbers and potentially grow.

“However there is time to make change, Sydney in particular has a great opportunity to halt that decline and even grow its following.”
Mr McCrindle attributes the steady decline to a number of factors which he predicts will now start to taper off and stabilise.

“There were a number of things which prompted the recent drop in believers including the Royal Commission into Institutional Responses to Child Sexual Abuse, a targeted campaign run by atheists encouraging people to write “no religion” as well as the Census document itself giving “no religion” the No.1 spot on the census form instead of last as it’s always been. 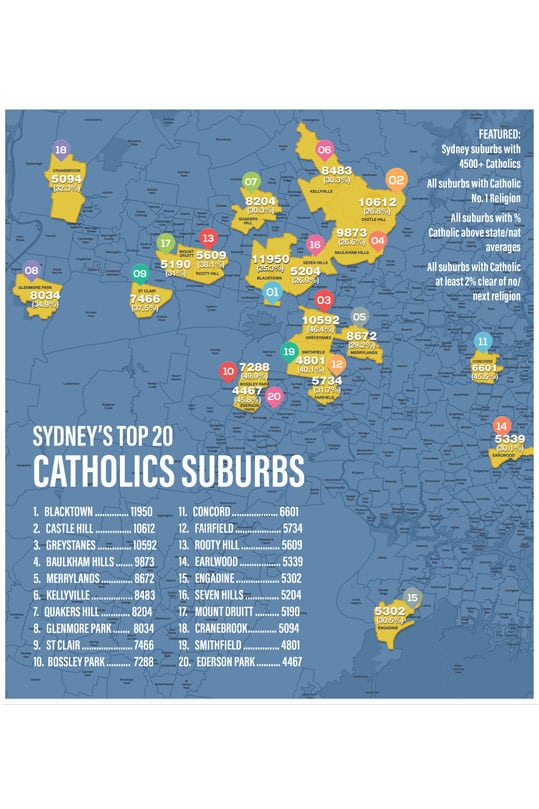 “However, having said that I predict we have seen the last of the big declines for some time and I feel the numbers will remain steady for the next few years.”
Tony Farley, recently appointed Director of Parish 2020 – an initiative aiming to renew and strengthen Catholic communities into the future – acknowledged the challenges but said it was an “exciting time to be a Catholic”.

“It’s important to remember that our Parish communities are working off a really strong foundation that makes growth possible in so many ways,” he said. “We hear all the time about the fracturing of communities in the digital age and that for many people, there’s spiritual hunger and desire for community that isn’t being met. Staring at phones and computer screens can only take you so far and for many Catholics the richness of parish life is central to who they are and who they want to be.

“People love Catholic parishes that are welcoming, where the preaching and teaching speaks to them deeply – it’s always a work in progress and the Archdiocese is filled with parishes that quietly create the places and spaces that reveal the Catholic tradition in new and contemporary ways.

“It’s an interesting challenge we face – how do we enter into a dialogue with those who don’t have faith and how can we share our faith in a way that is both respectful and optimistic? It’s an exciting time to be a Catholic – we’re being challenged in so many ways and our capacity to respond positively to those challenges is limitless.”

The study also showed one in three (33 per cent) Australians who identify with Christianity are regular churchgoers, attending at least once a month.
One in six (17%) attend every few months to once a year. Australians who identify with Christianity but never go to church are most likely to be female (55%), a baby boomer (38 per cent), and committed to the religion their parents/family brought them up in (43%).

Australians most value Christian organisations for their work with those in need, specifically looking after people who are homeless, offering financial assistance/food relief programs and providing disaster relief (74%, 72% and 69% respectively).

For more information go to www.mccrindle.com.au

Find out how your suburb rates: NSW_Catholic_Suburbs

Church opens to a new life

A choice with consequences