Churches across greater Sydney reverted to the four-square-metre rule from midnight Sunday 20 December as state authorities scrambled to contain a new outbreak of coronavirus on Sydney’s northern beaches region.

While regretting the reimposed restrictions, Archbishop Anthony Fisher OP responded by giving clergy of the Archdiocese permission to celebrate increased numbers of masses; he also reinstituted the dispensation from Sunday Mass, including Christmas Day, until such time as the two square metre rule is reintroduced or restrictions dispensed with altogether.

The measure was announced at a media conference in Sydney on Sunday morning led by Premier Gladys Berejiklian and Health Minister Brad Hazzard.

A maximum cap of 300 attendees will apply to church gatherings, in light of the heightened community transmission of COVID-19.

Mr Hazzard has also indicated that there would be a maximum of five people allowed to sing at Masses; these would need to be socially distanced and no congregational singing will be allowed.

The tougher rules would be reviewed on Thursday 24 December ahead of Christmas Masses, the Premier said.

Responding to the developments, Archbishop Anthony Fisher OP said many churches in Sydney would see significant restrictions and clergy are already planning to maximise the number of services they could offer at Christmas.

He had given clergy special permission to celebrate extra masses and reinstituted the dispensation for Catholics from their obligation to be at Mass on Sunday and Christmas Day. This would continue until the two square metre rule is reintroduced or restrictions are dispensed with.

“Though Australia has been spared the worst of the worldwide pandemic and we were hoping to return to some normalcy this Christmas, we all knew that we were not out of the COVID woods yet,” he said in a statement issued on Sunday.

“Further outbreaks are likely from time to time and place to place until this pandemic is conquered altogether. Sadly, however, such an outbreak has come to us in Sydney on the very eve of Christmas.

“In keeping with NSW Health directives we will need to limit attendance at all indoor Masses (and other services) from tomorrow according to the four square metre rule. For many churches this means no more than 70 or 100 people at a time, but even the biggest, including St Mary’s Cathedral, will not be allowed more than 300. We still need to record details of all attendees to allow contact tracing if required, and singing will be severely curtailed.

“Instructions have been issued to parishes and we will update them as the situation evolves. I am especially grateful to our clergy for their flexibility and generosity in continuing to lead their flocks through this. We are determined to cooperate with all reasonable directives so as to keep each other safe.

An opportunity to grow closer to God

“With my encouragement priests are doing their best to schedule additional Masses at Christmas, including in parish halls, and to reach out to people in other ways. We know that though this is one of our holiest times of the year, it can also be for some the loneliest time as well.

“In light of the latest restrictions, I have granted priests permission to celebrate additional Masses and granted the faithful a dispensation from the obligation to attend Mass on Sunday and on Christmas Day; this dispensation will continue until the two square metre rule returns or limits are removed altogether.

Restrictions a blow to religious communities

“Please know that my prayers are with you at this time. By God’s grace, when this crisis is over, we might find that our hunger and reverence for our Lord in the Blessed Sacrament has increased rather than been damaged, and that we have in fact grown closer to God than ever. God bless you all in this holy if challenging time,” he said.

The new limits, part of a raft of measures effected by NSW government health orders applying to community organisations across the state, came as a blow to religious communities throughout Sydney, disrupting church plans for Christmas services after a year in which church services were significantly reduced by public health restrictions.

In a pastoral letter circulated throughout the Archdiocese of Sydney on 13 December only a week before the tighter restrictions were reimposed, the Archbishop rescinded the dispensation from the Sunday Mass obligation imparted earlier in 2020 and invited all Catholics to return to weekly Mass participation.

Together with Easter, Christmas services are traditionally the most highly attended because they are the most important feasts in the Christian calendar.

Meanwhile, the popular Lights of Christmas at St Mary’s Cathedral, one of the most popular annual Christmas events, was cancelled on Saturday 19 December because of the developing situation.

Organisers urged those wishing to attend to check the Lights of Christmas website for further updates. 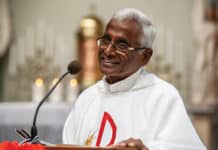 Call for prayers after death of Archbishop Philip Wilson