By Catherine Sheehan and Debbie Cramsie

In an area of Sydney where refugees are few and far between, students at one Catholic school recently had the opportunity to experience something of what an asylum seeker goes through in the search for freedom and safety.

The school’s gymnasium was transformed into a world of leaky boats, customs officials and visa applications. The idea behind the activity is to allow students to “walk a mile” in the shoes of a refugee.

St Patrick’s received a grant from the Sutherland Shire Council and Gymea Community Aid and Information Service to run the Refugee Challenge, which was also supported by the Refugee Council of Australia, Amnesty International, UNHCR, Settlement Services International, Red Cross and Caritas.

“Seeing how the kids reacted was such a powerful experience for us all,” said Declan Donohue, Director of Religious Education at St Patrick’s.

“Students had the opportunity to follow an interactive course (which takes up our whole gymnasium) basically walking a mile in a refugees shoes; everything from leaving their home country, to visa applications, to being intercepted by customs officials, to being settled in a refugee camp. This was obviously followed by discussions and de-briefings.”

Year 10 students undertook the challenge for their RE Reflection Day and the activity was facilitated by those enrolled in the Newman Program for gifted students.

“Today’s experience opened my eyes to the sheer amount of people who suffer harsh conditions by travelling on leaky boats,” he said.

Meanwhile classmate Audrey Varsamidis said the experience had spurred her on to want to take action in aid of refugees.

“The refugee challenge demonstrated the lack of empathy in refugee camps from some parts of Australia’s society. This gave me an opportunity to realise our need as young adults to take action against such large issues in our society today,” she said.

The interactive course was left up for an extra day so Year 9 and 10 students from other schools in the Sutherland Shire could also experience it. 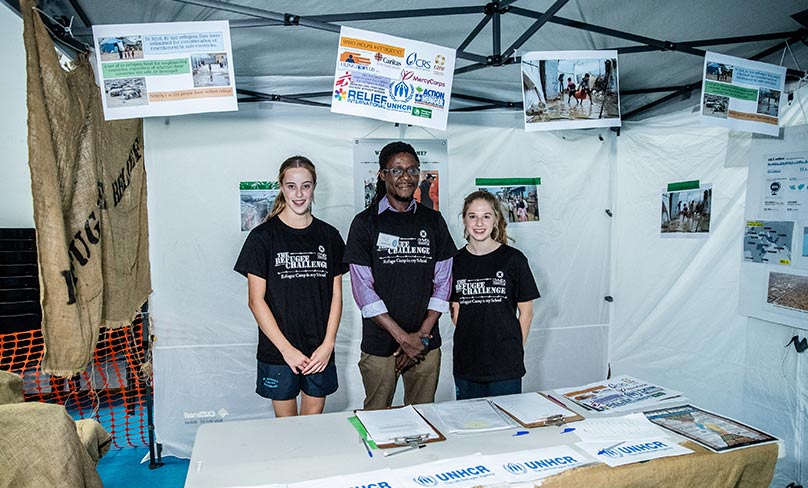 With almost 80 per cent of the Shire’s population being Australian-born, for many of the students, meeting program coordinator Mikhail Kallon was the first time they’d even seen a refugee.

Mr Kallon said the innovative program was helping raise awareness of refugees and was designed to “start a conversation among young people” on how to assist them.

As a refugee who fled his native Sierra Leone more than 10 years ago, Mr Kallon said for most of the students he was the only refugee they had ever encountered.

“Very few students have ever seen a refugee before let alone spoken to one and heard first-hand of their experiences leaving their homeland,” he said.

“The Sutherland Shire has a very high rate of people born in Australia so only through programs like this do they develop empathy and an understanding of what a refugee goes through.

“Hopefully programs like this will open their eyes and their minds to those forced to flee their homes and seek asylum.”