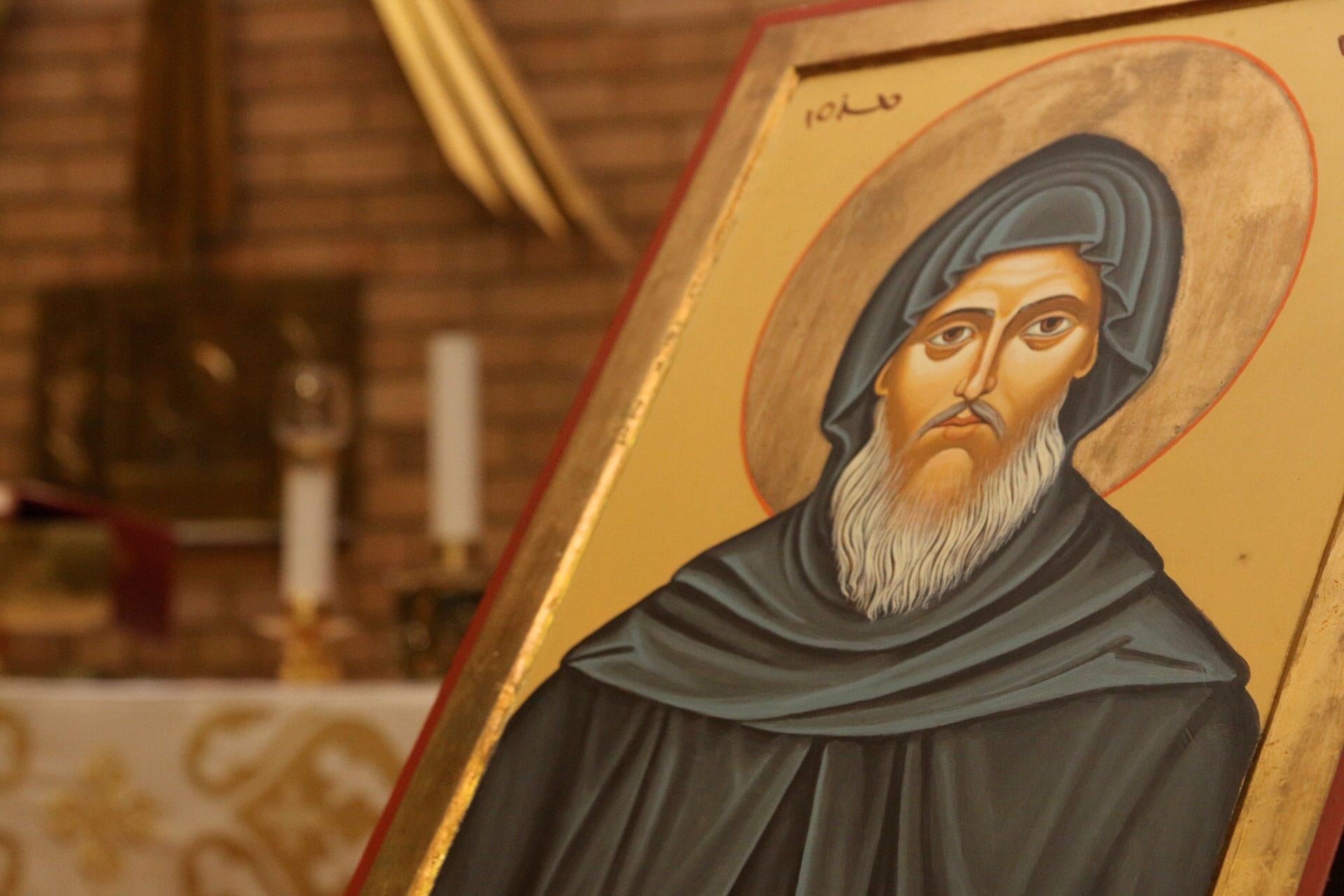 An icon of St Maroun

The Maronite Church is a powerhouse of faith and activity in Sydney, but to whom does it owe its unique spriritual heritage? Fr Joseph Azize surveys this remarkable figure in the Church.

There is a special continuity between the tradition of the Maronite Church and the Semitic world into which Our Lord was born, and in which He lived, taught, and died.

The vehicles of that continuity are the languages of Aramaic and Syriac, and the Semitic village culture.
If we think of the Maronite Church as a tree, then its seed was planted by the teaching of Our Lord Jesus Christ, as passed on through His apostles.

In the person of St Maroun of Syria, that seed put down roots.

Then, through his disciples, who journeyed to Lebanon, a sapling shot up from the soil of Lebanon.

Finally, a full-grown cedar appeared, tended by St Yuhanna Maroun (a monk from a Syrian monastery named after St Maroun), who was elected Patriarch of Antioch to preserve the Christian faith.

No “Maronite Church” was ever founded on a given day of a certain year. Rather, an important portion of the Christian Church in Syria removed to the mountains of Lebanon.

Then, in communion with the Church there (which also owed its origins to the disciples of St Maroun), they continued to live as the Church they had been in Syria.

They handed on not only the faith but also the forms and ecclesiastical hierarchy that they knew.

They always considered themselves to be in unity with Rome and through Rome with the Universal Church.

They retained their Aramaic tongue, and used Syriac (which is a dialect of Aramaic written in a script fashioned in Edessa).

Isolated from the world outside by geography and their religious opponents, they preserved their faith in all its ancient monastic purity.

The Maronite Church therefore forms a religious and spiritual bridge spanning the epoch of Our Lord with the ages which have followed it.

This is manifested most clearly in the Syriac tradition of the Maronite Church, as I have attempted to demonstrate in my recent book, An Introduction to the Maronite Faith.

This mutual recognition was given a glorious symbolic solidity when in 2011 a statue of St Maroun was placed in the last remaining empty niche in the outer wall of St Peter’s Basilica, Rome.

St Maroun
There is no figure in history quite like the elusive figure which is St Maroun, whose feast we celebrate on 9 February.

Apart from the less well-known apostles, few figures are both so important in the history of Christianity, and yet so invisible.

No other purely Catholic rite is, as far as I know, exclusively named after one person: our entire rite is named after our god-father, this great, yet shadowy figure.

As he appears in history, St Maroun was a hermit teaching in the mountains of what is now Syria until his death (probably sometime before 425AD); a man of a holiness which was absolutely magnetic, a priest who was able to make the great breakthrough nobody before him had.

St Maroun’s breakthrough was that he was the first Christian teacher to be able to make a significant and enduring impact upon the people of the Syrian and Lebanese countryside and mountains.

He did this because (1) he possessed the richness of Greek Christianity, but naturally expressed it in the Aramaic language of these people; (2) his example inspired young people of the region to follow him into the religious life; and (3) his life, and the lives of his religious disciples, demonstrated to the lay people, that in Christianity there had come a religion greater than the polytheism they had known.

We do not know when St Maroun was born, except that it was sometime in the 300s.

He almost certainly died between 410 and 425, but we have no clue as to his age at death.

The critical fact about St Maroun is that he lived as a hermit, and he died, atop a hill in Syria, probably at Kaluta.

St Maroun was the first hermit known to spend his days in the open air.

He chose a site which had been a place of pagan worship. 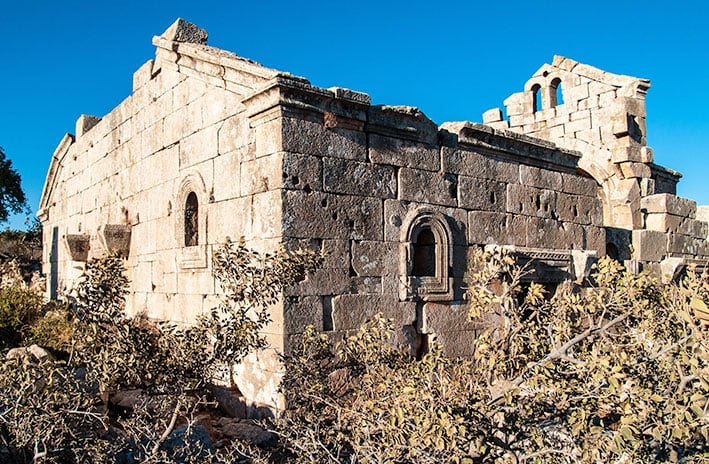 The Village of Kaluta in Syria, where he settled and lived as a hermit still has an impressive collection of Byzantine remains which include numerous churches and several villas

St Maroun dedicated those precincts to God, which may mean that he performed an exorcism, turned the temple into a church, and blessed the rest of the area. For protection against rain and snow, St Maroun relied upon a tent made of animal hides. This made a big impression on the people.

There seem to have been two sides to his life at Kaluta: a private life of prayer and spiritual exercise, and a public life with his many visitors, which included many diverse matters: conversation, advice, teaching, healing and exorcism.

The only surviving account of St Maroun, the one written by Theodoret, is short, but it highlights his magnetism.

First, it mentions his ascetic disciplines: prayer, fasting, penance, and depriving the body of sleep.
It is clear that St Maroun was a master of these disciplines, and also that he taught various pupils, such as Yakub, Limnaios and – perhaps – Domnina.

Theodoret is emphatic on the point that St Maroun was a great teacher: he states that the hermit “planted the paradise which now blooms in the land of Kurros (also known as Cyrrhos or Cyr).”

In addition, St John Chrysostom (347-407), the Bishop of Antioch, and later of Constantinople, wrote a letter to a hermit named Maroun, and asked him for his prayers.

It is more probable that this was addressed to St Maroun than to someone else of that name.

That he enjoyed the confidence of Chrysostom would tell us how impressive a figure he was.

Theodoret says that: “Caring … for the garden of God, doctoring to both souls and bodies alike, he patiently suffered but a short illness. Maroun, teaching us the frailty of our nature and strength in commitment, withdrew himself from this life.”

Note the enigmatic phrase: he “withdrew himself from this life.”

Theodoret seems to say that there came a time when St Maroun fell ill, and he deliberately surrendered his soul to his Maker.

If this interpretation is correct, it tells us how trusting in God he was, how far above worldly attachments, and how lacking in selfish fear.

2. After Pentecost, the Apostles travelled, spreading the gospel. St Peter is reliably placed in coastal Lebanon, and is said to have established a bishopric in Byblos.

3. Christianity spread northwards along the coast to Antioch. Although the Apostles themselves spoke Aramaic, they could also communicate in Greek. Perhaps because they could reach more people by teaching in the cities, the disciples did not have as much success in the countryside as they did in the chiefly Greek-speaking cities. It is known that in Antioch, there were many ordinary men and women who lived lives of celibacy. It is also known that monasticism was a native development in Syria: it was not imported from Egypt. The most likely hypothesis is that eremitism (the condition of being a hermit) and monasticism developed directly from Jesus’ example.

5. Christianity is not believed to have made much headway in the Syrian and Lebanese countryside. After all, the peasants had little or no Greek. Our saint’s name: “Maroun” (the Syriac for “little lord”), strongly suggests that he came from a Syriac background. This is significant; the names of most of the other monks and hermits, and even Theodoret’s own name, were Greek.

6. It is not unreasonable to think that St Maroun represented an authentic Syrian Christianity, which can be traced directly back to Our Lord himself and the apostles.

The above reconstruction cannot be proven. But there is no evidence against it, and it makes sense of our traditions (not least that a Catholic rite bears his name) and all of the other evidence.

In short, in Mar (St) Maroun there was finally found someone who was a master of the Christian teaching, and who could act as a bridge between the Greek-speaking cities and the Aramaic countryside.