As the Church’s liturgical year draws to a close, Catholics are reminded that the source of all beauty and the final destiny of all things lie in God, Pope Francis said.

Celebrating an early morning Mass on 13 November, Pope Francis noted how the readings at Mass turn more and more to the “end times” as the Church approaches the feast of Christ the King (22 November) and the beginning of a new Church year the next week.

The Mass readings for 13 November – from the Book of Wisdom and the Gospel of St Luke – do not ignore the good of God’s creation and of earthly life, but insist that believers not “idolise” them as if they were eternal, the pope said at the Mass in the chapel of his residence.

He described as “the idolatry of immanence” the tendency described in Wisdom 13:1-9 to admire the beauty of creation but never look beyond it to recognise the power and goodness of the creator.

People, he said, “are attached to this idolatry. They are awestruck by the power and energy” of fire, wind, stars and seas. But “they don’t think how superior the Lord is because he, the principle and author of beauty, created them”.

“The great beauty is God,” he said; all else will pass away.

Another danger to be on guard against, he said, is the idolatry of habits, which harden the heart.

In the day’s Gospel reading, Jesus tells his disciples about how, before the flood and before the destruction of Sodom and Gomorrah, the people “were eating and drinking, marrying and giving in marriage” with no concern for others or for the future of their own souls.

“Everything is habit,” the pope said.

“Life is like that. We live without thinking of how this world will pass away. This, too, is idolatry, being attached to habits without thinking how it all will end. The Church makes us look at the end of these things.”

“We believers are not people who turn back, who give in, but people who keep moving forward,” the pope said. One must acknowledge beauty in the world “without divinising it. It will end”.

The “small beauties that reflect the great beauty” and the daily habits needed for survival should be placed in their proper perspective as people prepare themselves for eternity “in the contemplation of the glory of God,” the pope said. 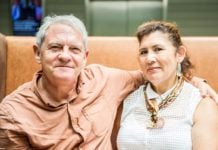