We buried my father this month. He and my mother had bought plain Trappist coffins for themselves years ago, to spare us children the trouble. But my father’s house, even though it had many rooms, was short on space, because it was so full of books — books to sell, books to read, books to just . . . have. And the coffins were also full of books. Books everywhere. Think of all those words, words, words.

Some years ago, when my sister lived there for a while, her little son took a marker and scribbled on the side of the casket, as kids do. I think he must have been pre-literate, because it almost looks like a letter, but maybe not. Who knows what he was trying to write. Whatever intentions the child had went down into the grave with my father’s body.

If this sounds grim, I’m telling it wrong. We all thought it was hilarious. That’s something my father would say: “You’ll go to your grave not knowing,” with a satisfied wiggle of his eyebrows. He loved having a secret, and he loved having a joke. And he loved talking about death.

At the cemetery the rain dripped off my hood and onto my virus mask, down my rain jacket, off the lame bunch of flowers I had bought at the supermarket, because I didn’t know what else to do. So lame.

When my father died, I had to ask my friends how I was supposed to respond to people who had sent Mass cards. I wanted to know if it was all right to thank them via email, or if I needed to send out paper cards of thanks. The part of my mind that wasn’t crying for my father was fascinated by the flourishing of social problems that sprung up overnight surrounding his death. 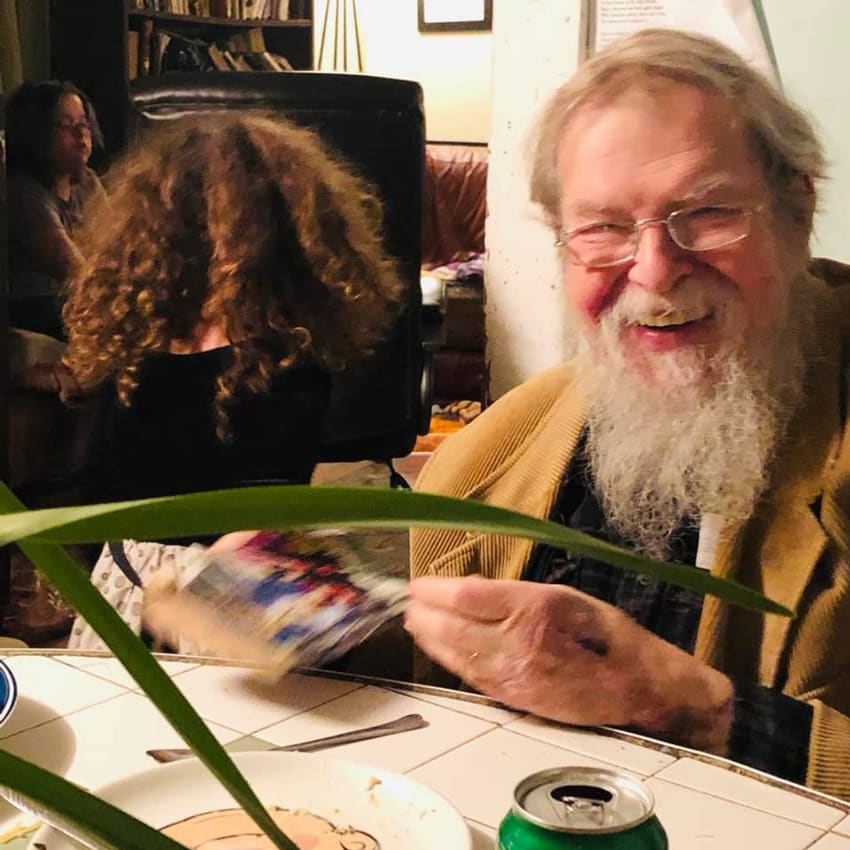 If someone I don’t know expressed sympathy on Twitter, was it weird to “like” their sympathy? Would it be offensive to tell a mutual friend of my brother that he probably wasn’t ready to receive any casseroles? I was afraid I’d have to come up with something to say at the burial, and I didn’t know what to say.

Was it okay to tell a little joke as the coffin was lowered into the grave? I could hardly help myself, so I whispered it to my husband, who laughed; and then I worried that the laugh might have been caught on the livestream that my brother’s girlfriend was sending to my siblings who couldn’t be there because of the virus.

It occurred to me, nobody knows how to do this. Nobody knows what to say or how to act. This is true any time anyone dies, because there is nothing more unknowable than death. How we love to talk about death. But the ones who can still talk are the only ones who don’t know what they’re talking about.

The only people who understand what it means are, by definition, not telling! So sue me, this makes me laugh, and I know my father would find it funny, too. He spent his whole life talking about death. I wonder what he thinks now.

Catholic film critic Steve Greydanus, who is recovering from COVID19, said that a Twitter friend had commented, “The biggest problem with being an atheist is that all the alternatives to ‘I’m praying for you’ sound super-lame.” Greydanus responded: “They do — but as a believer who has recently gotten a lot of these alternatives: I know you wish you could say you’re praying for me, and that means a lot to me. I even think it means a lot to God.”

I would go further than that. I would say that, even as a believer, “I’m praying for you” sounds super lame when I say it. All words are lame, in the old sense of the word: Lame as in feeble, limping, damaged. Words, words, words.

How we love to talk about death. But the ones who can still talk are the only ones who don’t know what they’re talking about.

But I believe in the resurrection of the body and life everlasting. I believe that the body that was lowered into the grave in the rain yesterday morning is like grass, and all the glory of man is like the flower of grass.

The grass withers, and its flower falls away, but the word of the Lord endures forever. The tangle of problems and questions and words, words, words that flourish in life will wither and fade, but the answer will endure forever. The answer, the Word.

Jesus is the word. Jesus makes the lame to walk again. All the words we say, words of prayer, words of comfort, the jokes, the cries, the feeble solutions, the baffled questions. The pre-literacy of our lives. All of this will be buried. All of our scribbled efforts go down to the grave, but not to stay. We may go to our grave not knowing any number of things, but when we come out? Who knows what we will know. And we will come out.

I believe in the resurrection of the body. I believe in Jesus, the Word made flesh. I believe He is the answer. If this sounds grim, I’m telling it wrong.