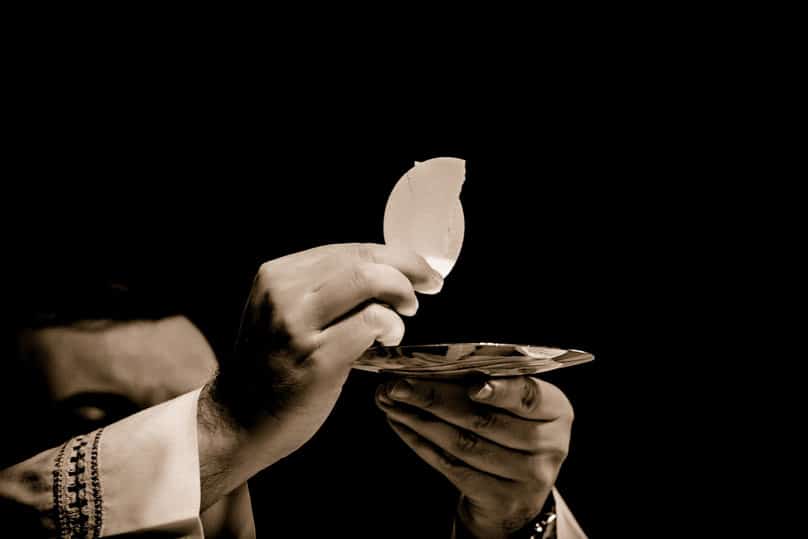 The good news is, our toddler did not spend Mass running around outside, throwing grass at birds and despoiling the Marian garden.

The bad news is, that’s only because we’re under a foot of snow here, and the grass, birds, and garden are nowhere to be seen.

We love that kid, but she is just plain rotten right now. Whenever we possibly can, we split up and take turns going to Mass, so someone can stay home and let her be rotten in private; but this week, that was not possible. So my husband and I took turns sitting on a folding chair in the parish hall, watching the dear child writhe around on the floor in a rage because we denied her the pleasure of diving into the parish toilet. I eventually calmed her down, administered a few bribes, popped in in time to receive Communion, and then scooted out again before the howls resumed.

Because this is our tenth child, I’ve spent many a Mass this way, and I’ve spent many a morning wondering what it really means to be at Mass. I know that we should make an effort to fulfill our Sunday obligation, and I know that God doesn’t get mad at you for not doing things you can’t do.

But what does it mean to be present at Mass? I used to flagellate my heart with accusations of ingratitude. Nigerian converts, I had heard, would labor six days a week, then spend the Sabbath walking barefoot eighteen miles to and from Mass, because they recognized it for the privilege it was; that’s how unwavering was their focus on the prize of Christ.

I’ve mostly abandoned this guilty line of thought. They are they, and I am I, and the cross God has given me is lighter, but it is mine. I want to be at Mass, but I often spend Mass distracted by unavoidable duties. With previous children, I would have asked myself (and anyone within earshot) what was even the point of going to Mass, if I knew I wasn’t even going to hear most of it, much less say the responses, much less dwell prayerfully on the meaning of it all.

I don’t ask that anymore. I think that what it means to be present at Mass is to show up with whatever you’ve got. We are there to worship God and to participate in the divine mystery by which the Son offers Himself to the Father. We have the unthinkable privilege of joining in on that sacrifice, and we do it by bringing whatever it is we’ve got. For me, that’s a week-long effort, plus little spurts of devotion and gratitude on Sundays and Holy Days. That’s what I’ve got right now. 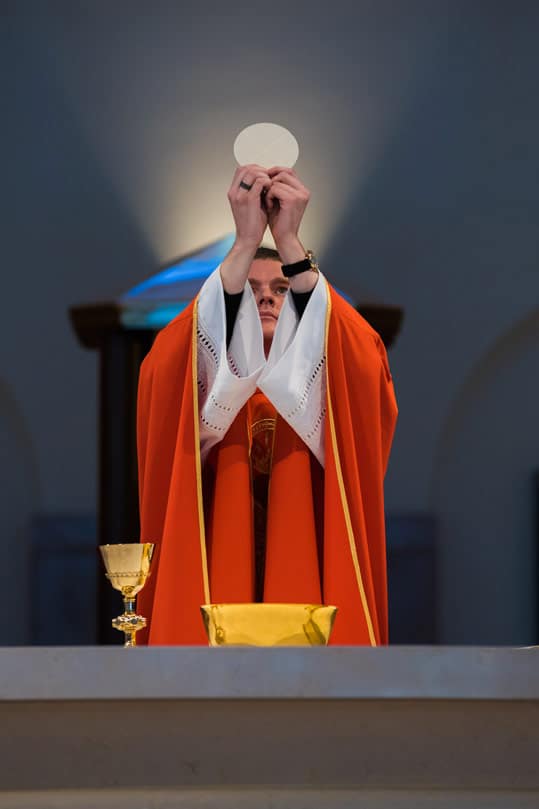 The great revelation: Whoever we are, whatever we’ve got, it’s still not enough. Whatever preparation we’ve done, it’s not enough. However attentive we are, it’s not enough. There is great peace in letting that knowledge sink into your heart: We’re not enough, and never can be — no, not even if we’re a shoe-less Nigerian toiling through the Mangrove.

But Christ is all.

So the parent who spends most of the hour outside the walls, but turns her heart to Christ for a good four seconds while her child is momentarily calm? She’s present at Mass, because she has offered up what she has to offer.

And so does young man with Down Syndrome, who chuckles and sighs his way through the liturgy, pausing only to whisper, “Jesus!” during the elevation. And so does the woman who isn’t even sure she wants to be a Catholic anymore, but she hasn’t made the rupture yet, because she loves her husband and knows he wants her to stay. And the man who grinds his teeth over liturgical banjos is offering up what he has, because he’s fighting his way through an invisible hedge of aesthetic suffering to get to Jesus.  Because nothing we have is enough, but Jesus is all.
What does it mean for you to be present at Mass? If you’re angry at God, you can hurl that toward the altar, too. If you’re worried about a thousand things and find yourself thinking about them over and over again, rather than about what’s going on at the altar, offer up the distraction itself. You cannot believe how unfussy Christ is, in His love for us.

I’m not saying “don’t try.” It’s a worthy thing to make sacrifices, even painful ones, for the privilege of participating at Mass. If you spent your life working hard to enter more and more fully into the mystery of the Eucharist, then that would be a life well spent indeed.

But if you find yourself thinking, week after week, “Why am I even here?” then I’m telling you: You’re there because Jesus is all. That’s worth a huge effort, and it’s also worth whatever you’ve got.