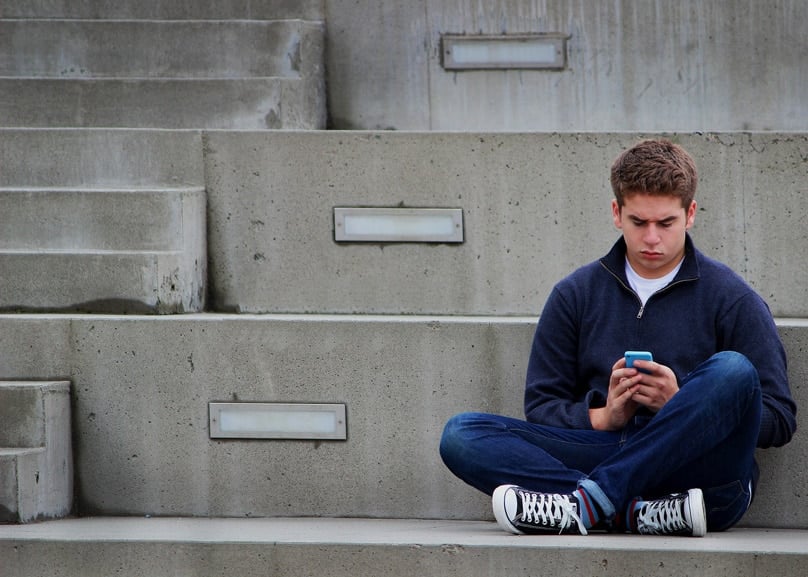 One family with teenaged kids has instituted what they call “The X-Plan.” If any of the kids finds himself in a sticky situation, and he needs to be rescued, he texts an “x” to their parents or older siblings. The parent or sibling, upon receiving the “x” text, calls the kid and says, “[S]omething’s come up and I have to come get you right now.”

This gives the kid an easy out, and he doesn’t have to come up with an excuse for leaving. Parents, emergencies, what are you gonna do? The dad explains:

Danny knows he has a way out; at the same time, there’s no pressure on him to open himself to any social ridicule.  He has the freedom to protect himself while continuing to grow and learn to navigate his world.

This is one of the most loving things we’ve ever given him, and it offers him a sense of security and confidence in a world that tends to beat our young people into submission.

He recognises the kid faces two kinds of assault from the world.

First, the world wants to hurt him outright. It wants him to get drunk and get high and shoplift and have meaningless sex and drive stupidly and fall out of trees and break windows and throw up in public, preferably on the night he has a big science project due. It is out to hurt him.

And the second assault is that it wants him to forget he is in control of his behaviour. It wants to push and harass and pressure him into doing wrong, without thinking, without reflecting, without understanding he has a choice; and it wants to make him feel horrible and embarrassed if he doesn’t do it.

In other words, it not only wants him to sin, it wants him to forget he has free will. It wants him to be both Eve and Adam: Rejecting God, and then denying that it was even his fault he did so.

The dad recognises that, in his effort to rescue his son, he has to avoid perpetrating both kinds of assault himself. It might be effective, in the short term, to simply save his son’s life or future by yanking him out of these situations forcibly and then yelling and screaming at him, punishing and humiliating him for his stupidity.

But if he does that, then the dad will become yet another pusher. This approach may make the kid safe, but it doesn’t teach him how to exercise free will; and how will that help him in the future? The dad has to not only rescue his son from harm, but he has to refrain from bullying him into accepting that rescue. The dad says:

Once he’s been extracted from the trenches, Danny knows that he can tell us as much or as little as he wants … but it’s completely up to him.  The X-plan comes with the agreement that we will pass no judgments and ask no questions (even if he is 10 miles away from where he’s supposed to be).  This can be a hard thing for some parents (admit it, some of us are complete control-freaks); but I promise it might not only save them, but it will go a long way in building trust between you and your kid.

He’s thinking not only of the immediate danger, but of strengthening the relationship for the future, both so that the kid can live a better life once he’s on his own, and so that the two of them can deepen their relationship.

The dad is a protestant minister, and I’m a little surprised that he didn’t overtly draw out a parallel between this policy with his son and God’s dealings with us. Maybe that’s because, as a protestant, he doesn’t have the sacrament of confession. Or maybe it’s just because he has a light touch, and doesn’t want to belabour the point.

But I do have the sacrament of confession, and I have two fists made out of pure ham. So I’ll do the parallel drawing myself.

When we go to confession, that’s texting an X. Help! I’m in a thing, and I know it’s bad, and I want to get out! And sure enough, here comes the rescue. Beep beep, get in the car! Ego te absolvo! And the escape is accomplished, easy as that.

It’s a small, ridiculously simple thing to do, and most of the time, no one will even know we’ve done it. Seal of confession for the win. This is pure, loving concern on the dad’s part: He knows that the first order of business is to get his child the heck out there before he does something he can’t undo.

And the second order of business is to step back, zip the lips, and let the kid figure out exactly what to do about this unearned rescue he’s just enjoyed.

Will the son say, “Thanks a lot, sucker!” and immediately put himself in the same situation again, because he knows he’ll always get rescued? He might.

Will he try to avoid letting it happen again — not because he sees the error of his ways, but because that ride home is kind of uncomfortable, and he’s embarrassed and ashamed? Again, he might.

Will he do this six times, and then, as he’s heading into the seventh iteration, think, “Wait. This is no way to treat my father. He obviously cares about me, more than I care about myself, and he never gets tired of coming to rescue me. Maybe I should stop for a minute and make a different choice”?

And then, he might think, “Yeah, but it seems like a really fun party, and all my friends are there!” and rush off and get himself in a pickle anyway, because he’s a stupid kid with a lot of growing up to do. And then he will text his dad, and then his dad will come get him, and his dad will not ask any questions, but just bring him home one more time.

In this voluntary conversation, he’ll be ready not only to admit “I need help!” but to say, “You deserve better than this, and so do I, and I know I can trust you. You understand these things better than I do, and I know you only want what’s good for me. So now you tell me: How can I change? Will you help me to change? Because I don’t think this is what life is supposed to be like.”

Why will this conversation be possible? Because the son will gradually begin to understand who his father really is. His father isn’t a dupe who is too passive or dopey to realise he’s being played. His father isn’t a raging authoritarian whose power is so fragile that it’s threatened by the freedom he’s given his son. His father could, if he so chose, control every aspect of his son’s life; but he loves his son so much that he’d rather wait until the son learns how to take control himself.

He wants him, in short, to be not a slave but a son.

Does that sound familiar?

Lent is upon us. Whether you have kids or not, do you go to confession. Text that x. Wait for your dad to come get you, because He has promised that He will. And if you’ve started to notice He’s rescued you over and over again, maybe think about having a talk, making some plans, taking advantage of the trust he’s placed in you. He wants to rescue you, and he wants to build a relationship, too. He wants you to be no longer servants, but sons and heirs.