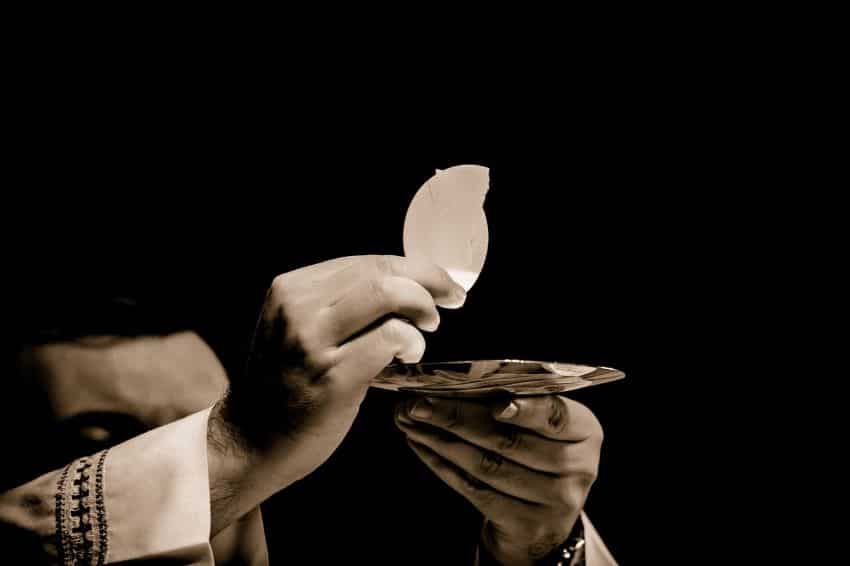 Lately, I’ve been thinking about the idea of slavery to sin, what it means, what it does.

Anyone who’s read the Old or New Testament, or who has been receiving the sacraments for many years, will be familiar with the idea of slavery to sin. Every time I put myself into the confessional, I must confess the same sins, over and over and over again. Why? Because I am enslaved to them. Some sins make flimsy cellblocks, easily escaped; but some have walls as thick as a lifetime.

Whether or not habit and circumstances make us more or less culpable, the upshot is the same: Habitual sin is slavery. It is servitude. It makes us helpless, less free to choose the good, less able to accept the gift of God’s promises. And, as I’m slowly realising, less free to give, as well.

A few weeks ago, I heard something new at Mass. It was the same old words of consecration that I’ve heard thousands of times before, but they said something new to me. The priest raised the chalice and said,

“This is the cup of my blood, the blood of the new and everlasting covenant. It will be shed for you and for all so that sins may be forgiven. Do this in memory of me.”

I suddenly thought, “Do what in memory of me?”

I had always heard those words as enjoining us to go to Mass, to be a witness to the consecration, to offer ourselves up along with Christ as he offers himself to the Father in the sacrament, and to receive the Eucharist if we can. And that is what it means. At the Last Supper, Jesus showed the apostles what he wants his Church to do. When he said “Do this in memory of me,” he meant “Change bread and wine into my body and blood, just like I’m doing right now.”

But that is not all. He didn’t just mean that we should celebrate Mass.

He meant that we should put ourselves into the chalice, to be poured out for each other, outside the walls of the church.

That is also what he was doing, at the last supper: Not only instituting the sacrament of the Eucharist, making bread and wine become his body and blood, but also preparing to put his body into the hands of those who would pour his blood out using whips and nails and spears. He willingly put himself into the chalice offered to him by the Father, so that he could be poured out for us. That is what he did, and he told us to do likewise. Not only to celebrate the sacrament and pour out the consecrated wine that looks like wine, but to imitate his free choice to die, to put himself in the hands of those who spilled his blood that looked like blood.

And there’s more.  He will never again suffer or die or be injured or sacrificed, but he still puts himself into the cup, still makes himself shockingly vulnerable, in the form of the accidents of the Eucharist. What is more fragile than a communion wafer? What is more prone to be spilled than consecrated wine? What is more helpless? And yet he does it over and over and over again, at every hour of every day all over the world, ever since the first mass was celebrated thousands of years ago. Over and over again, he puts himself into that cup, to be helpless.

But how different from the helplessness of slavery.

When I am enslaved to sin — when I have willingly put myself into the little cell of sin, over and over and over again– I am decreasing my freedom. I am confining myself, which in turn makes me less capable of serving others. This is how it works, I have finally noticed: Even private, personal, secret sins that seem to involve no one but myself do not remain private.

A slave can’t help people who are outside the walls of his cell; and someone enslaved to sin will fail, over and over, when he tries to act in love and service to other people. When we choose to remain enslaved to sin, it limits our capacity to love. Slavery is slavery. A slave cannot give, because he is bound.

But sacrifice is not slavery. When we freely choose to make a sacrifice of ourselves, then we can give.

Superficially, slavery and sacrifice look the same. To the jeering Romans, Christ died like a slave, pinned to the cross like a bug. But the nature of his death was the opposite of slavery: It was sacrifice, made willingly, out of love, for the purpose of being poured out. It looked like bondage, but it was freedom.

And it is freedom that we can all have.

Christ told us how: “Do this in memory of me,” he said.

Simcha Fisher: A fake baptism and the real presence