A friend was very reasonably grousing about holy cards that make saints look like they’ve died halfway through a seizure. The mouths hang slightly open, the eyes are rolled up, and they’re pale as a corpse. That’s how sanctity is portrayed.

This gooey, sentimental style has just about died out, thankfully. I do understand why it was once popular, though. Artists were trying to depict someone who was in the world but not of the world. The rolled-up eyes and otherworldly stare were intended to show a holy detachment in a saint whose entire attention is fixed on Heaven.

Unfortunately, what it conveys to modern people is: “Saints are creepy weirdos who don’t care about you and are definitely not like you.” Pretty much the opposite of what we should be hearing, when we think of the universal call to grow in holiness and to be saints ourselves.

Another friend, an artist, commented,

It was just a quip, but she is onto something. There’s a reason we’re more drawn to this look: 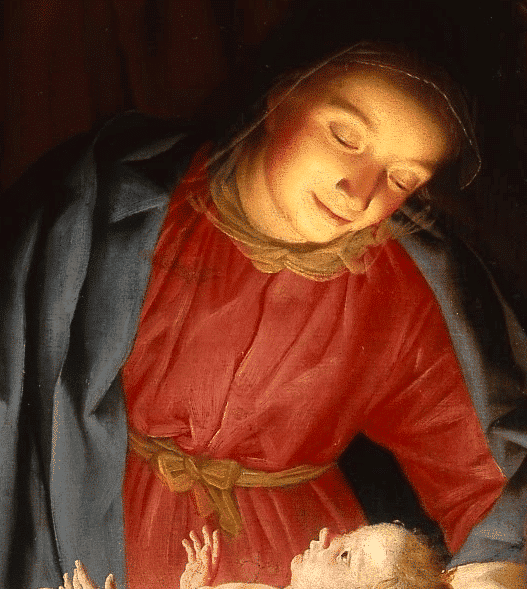 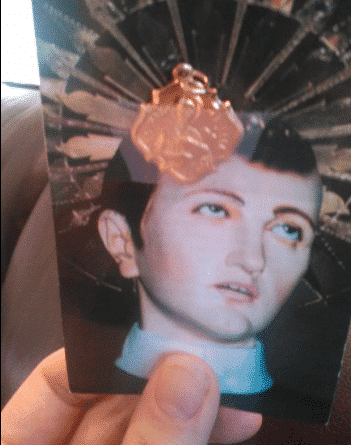 The otherworldly glow of her skin is warm, like a fire, rather than pallid, like leprosy, and her tender, gracious, intimate downward gaze at her beloved Child expresses the holiness the sentimental artist was grasping at. The thing is, she is looking to Heaven. She is finding it in her Son.

At Mass for the Immaculate Conception, I heard the account of the annunciation, and had a thought I’d never had before. The angel comes to Mary and says,

‘Behold, you will conceive in your womb and bear a son,
and you shall name him Jesus.
He will be great and will be called Son of the Most High,
and the Lord God will give him the throne of David his father,
and he will rule over the house of Jacob forever,
and of his Kingdom there will be no end.’

But (as you know)

Mary said to the angel,
‘How can this be,
since I have no relations with a man?’

Ha! The angel — an angel — just told her, “You are going to have a baby who will be THE SON OF GOD and He will BE KING OF EVERYTHING AND RULE FOR EVER. And her question is, “Okay, but about this baby . . . ”

She’s not wondering about the theology of how a human baby can be the son of God. She’s not thinking about salvation history or heavenly thrones or eternity —  not right this moment. She just wants to know about her and the baby, and also about her husband-to-be. First things first. This is the conversation she wants to have with an archangel: Let’s talk about my Son, because it’s personal.

There’s that downward gaze. So much better than rolled-up eyes! It’s a good look, on Mary and on all of us: that personal, intimate, “You’re real and so am I” connection. That would be a good posture for all of us to adopt for the rest of Advent: Look to the ones who are closest to us. Look to their needs. Take their day-to-day existence seriously as our concern. That includes beloved family and friends, but also the people whom God puts close to us whether we wanted to cross paths or not: the crabby customer service gal, the cantor whose warbling gets on your nerves, the snotty stranger who comments on your social media. If we can, we should remember Mary’s gaze and try to adopt it. Take care of them by being gentle, forbearing, or attentive. If (when) we screw up and lose our tempers, we should try again next time we meet someone. If not during Advent, then when?

Holiness is personal. If it’s impersonal and abstract, it’s not holiness. Like it or not, sanctifying our responses to each other is how we will find Heaven. Don’t roll your eyes at me! Not in exasperation, and not in sentimental piety, either. This is how we find Heaven. It’s personal.