Stay with me here, there’s something to be said for them

I was talking to a fellow who works as a missioner with the Maryknolls in Tanzania. He’s still learning Swahili, and wasn’t sure whether the liturgy itself is much different from what he’s used to in the states; but one unmissable difference comes during the offertory.

Along with the bread and wine, parishioners will often bring up gifts of live chickens and goats for the church. These wander about the church grounds and are eventually slaughtered and eaten by the priests.

The frivolous thought popped into my head that I should have asked him about the architecture of the churches, because no matter what your liturgical leanings, you have to admit: If there are going to goats involved, it would be nice to have an altar rail installed.

I grew up in a church that had an altar rail. My family was relatively new to Catholicism, and our first experience of parish life was at a church so enlightened, it threatened to float away on the gaseous fumes of sheer liturgical reform.

“our first experience of parish life was at a church so enlightened, it threatened to float away on the gaseous fumes of sheer liturgical reform.”

We reached a breaking point when literal clowns made an appearance in the nave, and, after a little church hopping, we discovered a rather stodgy Polish parish nearby, where very little had changed since 1920 or so.

As I understood it, the bishop would stick his head in every once in a while, decide that a fight with a Polish pastor was a fight he did not want to have, and sagely hurry on back to the cathedral.

Altar rails were not, as many believe, abolished with Vatican II, but they did become less common. But this church still had and used one. We got used to it very quickly. It was a simple process: the congregation would file up the center aisle and range themselves along the communion rail, kneeling and waiting.

The priest would walk back and forth, distributing the hosts. Except for a few ancient people whose joints no longer worked, everyone would kneel, and I think I remember that everyone would receive on the tongue, but I could be wrong. 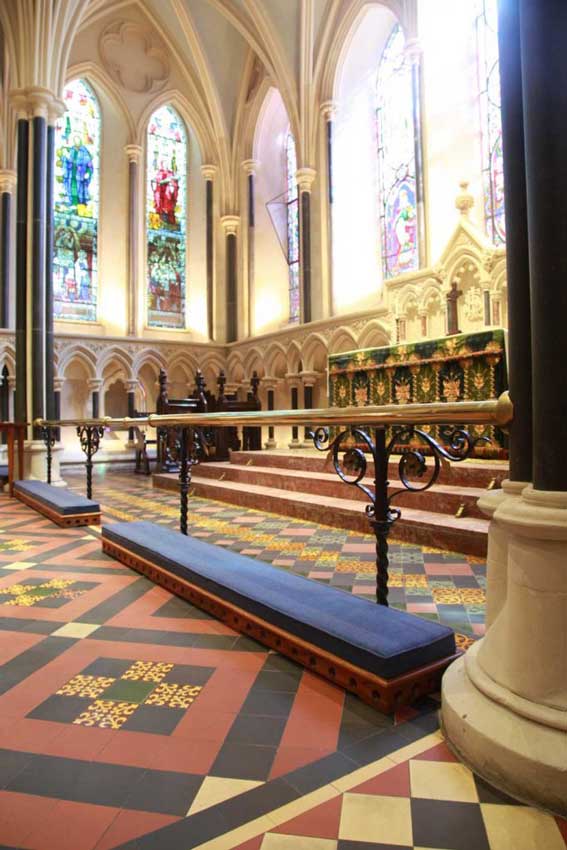 I think many people associate the use of a communion rail with a certain liturgical rigidness and frigidity.

They see it as a fence between the congregation and the altar — as something barring the people from contact with God, something that marks us as unworthy, something to be corralled, while the elite clergy go about their mystical rituals at a remove.

In this parish, at least, there was nothing of the kind. Our priest was so kindly and approachable that we occasionally found ourselves accidentally calling him “Uncle” rather than “Father.”

He was known for winking and waving at the congregation during his sermons, and he kept a bottomless supply of candy stored somewhere in his pockets, pressing sweetness into the hands of everyone he met.

When he walked back and forth with his paten, bringing the host to the waiting communicants, I was reminded of a busy nurse moving from bed to bed, administering tender care to patients in a ward — or maybe even a parent bird feeding its chicks as they waited impatiently with ludicrously hungry beaks.

I have no complaints about the system that most parishes use, where parishioners join a line to meet the priest, and receive communion one at a time, standing or kneeling, in the hand or on the tongue.

There are many ways to be reverent while receiving Christ, and it’s good to remember that one of the worst ways to be a good host for the guest of all guests is to spend your time fretting about logistics. So your mileage may vary, as they say.

“I think many people associate the use of a communion rail with a certain liturgical rigidness and frigidity…in our parish, at least, there was nothing of the kind.”

My own experience, though, is that the altar rail is helpful, spiritually and emotionally. It takes the logistical awkwardness out of receiving communion, because everyone is doing the same thing.

It gives you a moment to rest on your knees and compose your heart while you wait for your turn. And it makes it very clear that this isn’t just another line you’re standing in to pick up your order. There is really nothing else like a communion rail, and appropriate, because there is nothing else like receiving communion.

The structure of the church is based on the structure of the temple, which did, in fact, separate the people from the holy of holies, for their own protection as much as for any other reason. But when Christ died — when he made the sacrifice that is re-presented in the Eucharist — the temple veil was torn in two.

It was a terrifying thing, when the veil was rent; but it was also a glorious thing, a wound of love, a door between heaven and earth. And so a Catholic church, with the altar at one end and the congregation on the other, retains the demarcation between the people and the holy of holies; but there is no veil, no wall between them. An altar rail isn’t a barrier; it is permeable. The holy of holies has been opened. That is, in fact, the point of a rail: It’s where you go to commune with the holy of holies.

The communion rail, I discovered, is sometimes referred to as “the people’s altar”, and it may even be laid with cloths in the same liturgically significant colours as the cloths covering the altar, perhaps denoting that this is our share in the priesthood. It’s not a barrier or a wall. Just the opposite: it’s a place to go to come close to Christ. And no matter what your liturgical style, let’s not forget: That is what we’re doing here. That is the whole point.

Maybe if there are goats wandering around, a rail might function might keep them from trampling on sacred things and doing them harm. But we are not goats; we are sheep, and an altar rail shows us where to go to be fed.

When it comes to liturgy, we’re all mutually-enriching mongrels
What’s on the menu when churches look like Pizza Huts?