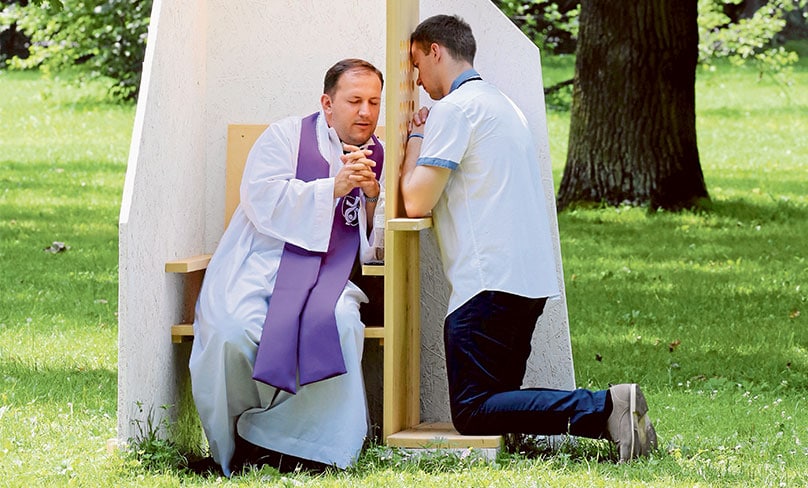 On the front page of last week’s Catholic Weekly, there was a story about Tasmania’s proposed laws requiring priests to break the seal of confession in circumstances where someone confesses to harming a child. Those who fail could receive the maximum penalty of 21 years imprisonment.

While the whole story was quite alarming, there was one line in Catherine Sheehan’s piece that particularly struck me: “This is the first reform the Tasmanian government is going to make in response to the 409 recommendations of the Royal Commission,” she wrote.

Seriously? Of the 409 recommendations, the priority of the Tasmanian government is stepping into the confessional and threatening priests with life in prison?

Given the number of priests and bishops who testified that they had never heard the crime of child sexual abuse ever confessed, and the testimony of people like Gerard Ridsdale – one of Australia’s worst, serial paedophiles – that even he never confessed the crime, it seemed to me a little strange that the sacramental seal would be the priority for the Tasmanian government.

And it’s not just the Tasmanian government. This month, South Australia’s laws requiring the breaking of the Seal of Confession have come into effect, and similar laws in the Australian Capital Territory will be effective on 31 March next year.

Of everything to come out of the Royal Commission’s investigations, why are laws relating to Catholic-specific practices the priority?

After all, 40 per cent of the complaints made to the Royal Commission related to government-run institutions. Surely there was something a little closer to its own backyard on which the state governments could focus?

I thought I would go back and take a look at some of the other recommendations that the Royal Commission made that were relevant to state and territory governments, to see what they passed over on their way to throw priests in prison.

In particular, I wanted to see what the Royal Commission had to say about government schools. In the past week, we have heard alarming statistics about an increase of allegations of sexual assault occurring within schools right now. The pattern is quite concerning.

For example, statistics show that, on average, one Queensland teacher is banned or suspended from teaching each fortnight for posing a serious risk to children.

In New South Wales, it has been reported that complaints relating to physical and sexual misbehaviour by teachers and staff against students with special needs has nearly tripled over the past two years, with more than 650 complaints made in the 2017-2018 financial year (including 63 allegations of a sexual nature.)

Even so, less than a quarter of complaints have been investigated, with the NSW Department of Education saying that 498 of the 650 complaints were not reportable. Of those that were investigated, the department also would not give any information as to the outcome or any disciplinary action taken. A parliamentary inquiry concluded last year that the investigations are conducted within the Department of Education, having the effect of the education system investigating itself.

Why is this the case? The Royal Commission rightly objected to investigations of wrongdoing within the Catholic Church being conducted by the Church. Why no objection to the same happening within schools? Why aren’t state governments trying to put into place legislation that would force disclosure of what the Department of Education knows?

Even though not one of the Royal Commission’s public hearings looked into the handling of incidents and allegations of abuse in state schools, it still made a series of recommendations that would have a much more far-reaching effect when it comes to information sharing about reports of sexual misconduct than bugging the confessional.

For example, the Royal Commission recommended that the information recorded in teacher registers should be consistent across the country and include details about any current or past disciplinary actions taken against a teacher. The Commission further recommended that, while having regard to privacy issues, a teacher registration body in one state be required to share details of disciplinary actions taken in relation to child sexual abuse with teacher registration bodies in other states.

It makes sense, doesn’t it, particularly as we see increasing complaints about misconduct in schools? Additionally, there are more than 400,000 teachers and other school staff in Australia, which exceeds by more than 100 times the 3,000 or so Catholic priests hearing confessions across the country.

On the numbers alone, it would seem that this would be a far richer source of useful information when it comes to the protection of children. But, as we read last week, it’s not the first action item for the Tasmanian or other governments. That’s fine, but let’s not pretend that prioritising the confessional is anything more than ideology trumping practicality.