Catholic agencies are racing against time to respond with emergency assistance to Indonesia after three back-to-back natural disasters within a week.

The 7.7 magnitude earthquake struck just off the coast of Donggala in Central Sulawesi last Friday, triggering an unexpected tsunami which devastated the city of Palu and left a trail of destruction in its path.

Now volcanic ash from the eruption of Mount Soputan in North Sulawesi yesterday may also impact on relief and evacuation efforts.

The initial disaster destroyed homes and businesses in Palu which is home to more than 300,000 people and also affected remote parts of Sulawesi.

The death toll has passed 1400 and could reach the thousands amid scenes that have been described as ‘apocalyptic’.

More than 48,000 people had been forced from their homes, and thousands of people have tried unsuccessfully to flee Palu via the city’s airport.

Catholic aid and development agencies were on the ground early and are preparing to support the embattled city in the weeks and months ahead. Caritas Australia’s senior programs co-ordinator for emergencies, Richard Forsythe, said he was concerned that while its local partners’ emergency teams had not yet reached all affected areas, the extent of the damage and lives lost wasn’t yet known. 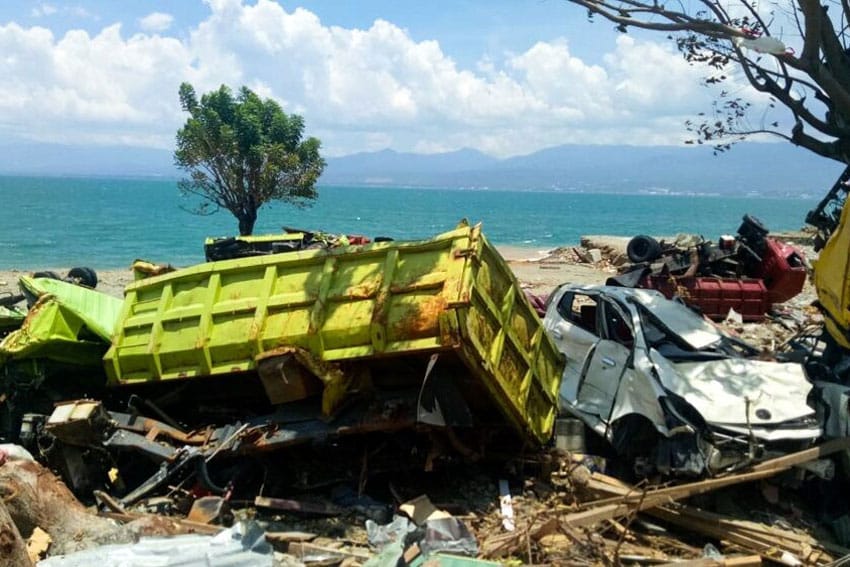 “Strong aftershocks have also continued to hit the city of Palu, making it hard for residents struggling in the aftermath of such a devastating quake,” he said.

At Caritas Australia we want to express our solidarity with the people of Indonesia, they are in our thoughts and prayers at this difficult time.

Fr Brian Lucas, national director of Catholic Mission said that he would wait for advice from the Pontifical Mission Societies Humanitarian Disaster Committee in Rome.

“Usually the immediate response to these catastrophes is from Caritas and other government and non-government agencies.

The Pontifical Mission Societies will then assist with support for the local church and the long term needs of the community,” he said.

“Any funds sent to Catholic Mission for the purpose of tsunami relief will be forwarded to the national director of the PMS in Indonesia, Fr Markus Nur Widipranoto,” he said.

Catholic Relief Services’ country manager in Indonesia, Yenni Suryani said the images coming out of Palu are “horrifying” and bring back memories of the devastation caused by the region’s 2004 earthquake and tsunami.

“One of the lessons we learned from that disaster is that it will take time to learn the full scope of destruction,” Suryani said.

“The government is to be commended for their immediate response and the work they are doing to get information out quickly. Knowing that time is of the essence, our partners are racing to overcome extreme logistical challenges to get to the scene as fast as possible.”