Cardinal Alojzije Stepinac, Archbishop of Zagreb in Croatia, died in 1960 while under house arrest after having been convicted of high treason 14 years earlier by the brutal communist government of Yugoslavia.

Three years ago, 56 years after his death, Cardinal Stepinac’s conviction was annulled, recognising that he had been falsely convicted and imprisoned.

In 1998 he was declared a martyr and beatified by St John Paul II.

To Croations he is a hero. His witness to his faith and studies of his life proliferate in the Croatian language. But little about him other than short summaries exists in English – not, that is, until Sydney priest Fr Zvonimir Gavranovic took up the challenge and began writing an authoritative biography in the early 1990’s.

Fr Zvonimir, Croatian by birth and assistant priest at St Michael’s Parish in Baulkham Hills, says the long process of researching and writing his 594-page biography of the Blessed Cardinal has made him “more committed” to his priesthood and to his Catholic faith. 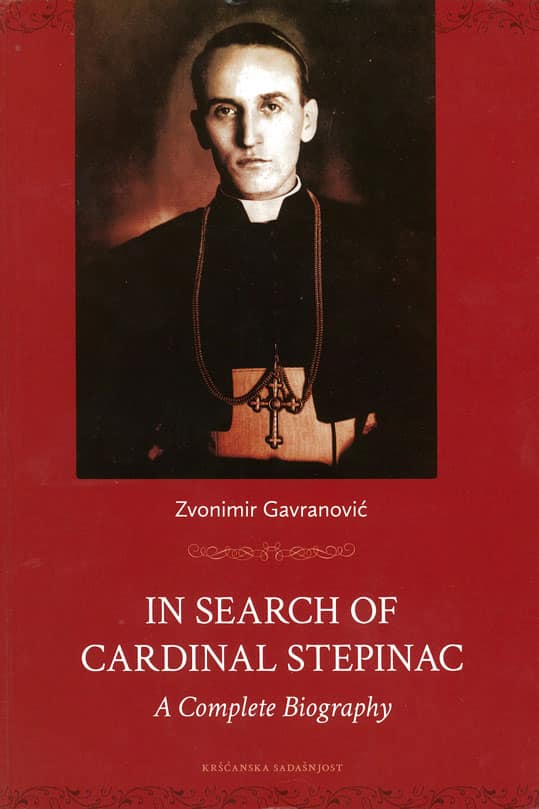 In Search of Cardinal Stepinac: A Complete Biography has sold out here in Australia and Fr Zvonimir is waiting for more copies to arrive from Croatia.

Fr Zvonimir was born to Croatian parents in the Austrian village of Schaerding, on the Austrian-German border in 1946.

After living in both Austria and Germany, he eventually moved with his family to Sydney where he entered the seminary straight after completing secondary school. He was ordained in 1972.

He first felt inspired to research Cardinal Stepinac after attending a Mass at St Mary’s Cathedral in 1985 to mark the 25th anniversary of his death. “After that Mass a thought came to my mind that there’s never been a comprehensive biography of Cardinal Stepinac in the English language,” he said.

“There were smaller books but not a comprehensive one. Then I decided I’d give it a go.”

He spent time researching in Zagreb and Kraši, where Stepinac was born in 1898, meeting many of the late Cardinal’s relatives and associates.

Stepinac was put on trial in 1946 by dictator Tito’s communist regime which, Fr Zvonimir says, killed up to half a million people based “purely on suspicions or trivialities”.

Ultimately, Stepinac was put on trial because he wouldn’t accept Tito’s vision of a state controlled Catholic Church in Yugoslavia, Fr Zvonimir said.

“Stepinac had an extensive meeting with Tito in 1946. Tito wanted to dominate the Catholic Church, wanted to create a Catholic Church independent of Rome. Stepinac was against that and that’s why he was arrested,” Fr Zvonimir said. “He was in favour of an independent state of Croatia.

“The Catholic Church was the only institution in communist Yugoslavia which was not under the control of the communist party.”

After spending five years in prison, Stepinac spent the rest of his life under house arrest in Krašić before dying on 10 February 1960 aged 62. There is some speculation that he may have been poisoned.

With a forward by Cardinal Josip Bozanic of Zagreb and a preface by leading historian, Dr Jure Kristo of the Croatian Institute of History, Fr Zvonimir’s biography comes with a bibliography and extensive index.

Fr Zvonimir hopes the book will give people insight into the Croatian-Serb conflict and what the people of Yugoslavia went through during the Second World War.

He also hopes the heroic witness of Blessed Stepinac will inspire people in living their Catholic faith.

“If someone reads this in a hundred year’s time and it inspires them to be a better person then I’m happy that it’s done some good.”

Fr Zvonimir’s epic work may not be the final word on Blessed Stepinac, but it is now the major work in English on this little known hero of the Catholic Church.

In Search of Cardinal Stepinac is available for $40 plus postage by emailing Fr Zvonimir on: [email protected]