More than 61 per cent of the world’s population live in countries where religious freedom is not respected, according to a worldwide report released 22 November.

The biennial Religious Freedom in the World report was published by the international Catholic pastoral charity and pontifical foundation Aid to the Church in Need International. Simultaneous launches took place in many locations, including London, Paris, Santiago, Manila and New York.

Aid to the Church in Need Australian national director Bernard Toutounji said the report was an important document, especially at a time when the topic of religious freedom is being discussed across Australia.

“The report highlights persecution and discrimination that adherents of all faiths undergo on a daily basis,” he said.

“Australians might ask why they should be concerned about the persecution of Christians on the other side of the world.

“To that, I would say that we no longer live with the same national isolation that we once did. The world is a global village in terms of trade, economy, politics and religion.

“Many of us have family and friends across the world and the trends that we note in one place in regards intolerance and persecution of those of faith can be trends that surface on our shores.

“Religious freedoms are equally important for all those of faith and even those of none, because it protects our ability to live according to our conscience in peace with one another.

“From a Christian perspective especially, we should care about the persecution of Christians because these are our brothers and sisters in Christ; and that itself demands our attention in the same way it would if one of our own siblings was suffering,” Mr Toutounji said.

The report’s executive summary states that from June 2016 to June 2018, the situation for minority faith groups deteriorated in 18 of the 38 countries assessed and almost half were found to have significant religious freedom violations.

The report also notes an especially serious decline in China and India.

“In many others countries, including North Korea, Saudi Arabia, Yemen and Eritrea, the situation was already so bad it could scarcely get any worse,” the executive summary states. 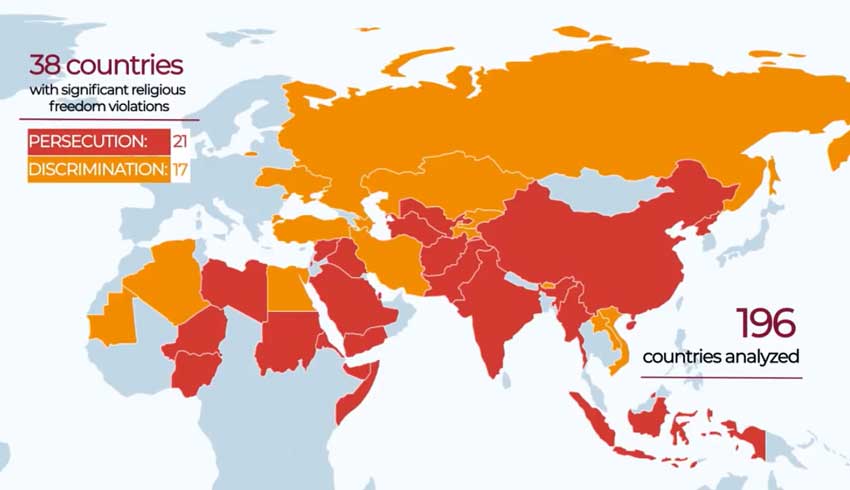 “In the eyes of the western governments and the media, religious freedom is slipping down the human rights priority rankings, being eclipsed by issues of gender, sexuality and race.

“Worsening intolerance towards religious minorities meant that for the first time, two new countries – Russia and Kyrgyzstan – were placed in the discrimination category.”

Regarding religious freedom in Australia, the report gives specific examples of numerous instances of societal intolerance and anti-religious violence in Australia.

“It appears that there were no significant new or increased governmental restrictions on religious freedom during the period under review,” the report on Australia states.

“However, there seems to be an increased risk of societal intolerance toward religions, fuelled by cultural issues such as marriage, geopolitical conflicts and anti-immigration sentiments in Australia.”

To read the full report, go to: http://religious-freedom-report.org/

Furthermore, Aid to the Church in Need, supported by the Australian Catholic Bishops Conference, has initiated Red Wednesday – a day to pray and stand in solidarity with all those who are persecuted and suffer unjustly for their peacefully-held religious beliefs.

Red Wednesday will be marked on November 28, when some of the world’s iconic buildings and places of worship will be floodlit in red: the colour of martyrs.

Among the buildings in Australia that will be used to mark Red Wednesday are St Mary’s Cathedral in Sydney and Melbourne’s St Patrick’s Cathedral.