The Church desperately needs to rediscover the gifts of the “masculine genius” in order to be a “healthy and growing” Church, according to Fr Paul Chandler—but what is the ‘masculine genius’ and why is it important?

An important clue is to be found in the title of his latest book Esto Vir, Latin for “Be a man,” recently published by Parousia Media and the fruit of his doctoral thesis on a theological understanding of masculinity.

He argues that because of an overwhelming social emphasis on the status and needs of women over the last five decades, the needs of men have been pushed aside.

Among the negative effects for the Church are a low and declining attendance of men at Sunday Mass – also reflected in participation in parish life. The National Church Life Survey appears to bear him out; 2010 NCLS figures report that in Australia only 39 per cent of Christian congregations are male. 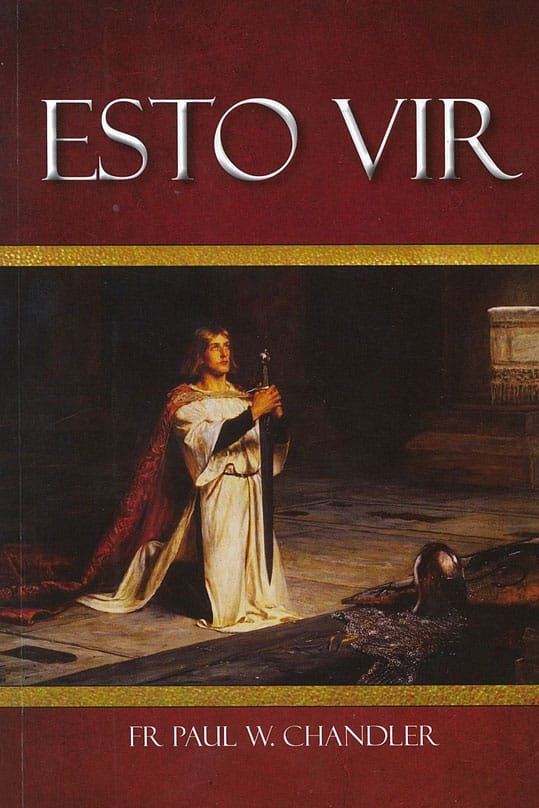 Fr Chandler, who currently works in the Melbourne Archdiocese, became aware of this situation while working as a parish priest in Brisbane.

“Since I’ve been a priest I’ve been struck by how few men come to Mass on a Sunday, how few men are actually involved in the life of the Church even if they do come along to Mass,” Fr Chandler told The Catholic Weekly.

“As a Church we need to ask the question why are men not present at Mass? I’d love that to be one of the questions at the Plenary Council next year because we’re not going to have a healthy and growing Church unless both men and women are engaged and committed to it.”

“If you look at what boys do naturally, I think that’s a clue. Boys like competition, camaraderie, and challenge. While they are things that resonate within the male makeup, they are the means by which you can, if you like, distill the masculine genius.”

“When men do things together, and they have that sense of brotherhood and fraternity, great things can happen, if it’s channeled in the right way. The gangs that we see in society, that’s the masculine genius being channeled in the wrong way.”

In parish life men should be challenged to work together to achieve goals that contribute to the common good, he said.

“If you can issue a challenge to men, it can be even as simple as saying, we need to build a new wall because this one’s crumbling, c’mon men of the parish, do it.”

When working as a Parish Priest in Brisbane, Fr Chandler said he challenged the men of his parish to attend perpetual adoration during the most difficult hours—night and early morning—so the women didn’t have to. He said “by and large” the men stepped up to the challenge.

He says that while in the past it was necessary to affirm and call out the feminine gifts in the Church and society—what Saint John Paul II termed the “feminine genius”—focusing solely on the needs of women inevitably led to a neglect of the needs of men and to an understanding of the masculine gifts.

Men are also partially to blame for the current situation, he said, as many stepped back from participating in the life of the Church, and in a wider societal sense, from their roles as fathers, husbands, leaders and initiators.

In a society and media culture often focused on “toxic masculinity”, he says the remedy lies in affirming men in the gifts of masculinity, helping them understand that masculinity is good and necessary, encouraging them to use both their personal gifts and their masculine gifts to build up the Church and society.

This can only be achieved with a proper understanding of what masculinity is. According to Fr Chandler, masculinity, like femininity, only makes sense if it is defined theologically, that is, in reference to God.

“Because we’re Catholic… if we either accidentally or subconsciously or even deliberately leave God out of the question of what it means to be a man, we’re depriving ourselves of part of the answer.”

“In [Vatican II’s] Guadium et spes … then-Bishop Karol Wojtyla says that when God is forgotten the creature itself becomes unintelligible. So if we don’t approach masculinity theologically, we’re not going to get a good answer.”

For his thesis, Fr Chandler took the principles of St John Paul II’s Theology of the Body in which the gifts of femininity are directly stated, and applied them to masculinity.

When men use their gifts for good, the results can be powerful, he says.

Surveys conducted in the US show that when dads take an active role in getting their kids ready to attend Sunday Mass, there is a 75 per cent chance those children will go on to become regular church goers. When mum is the chief organiser the percentage drops dramatically to only two per cent.

“My speculation would be, the fact that dad is there has a greater impact on his sons. By far the greatest fall away in young adults going to church or Mass is among the young men.”

Surveys in both the US and Australia, meanwhile, show that between 75 and 80 per cent of seminarians have been altar servers.

“These are boys who have been close to the priest, helping the priest… They see the priesthood close-up, particularly that sacred moment during Mass. So if God is going to call a boy to priesthood, the seed will be sown through his association with the priest.”

In order to encourage men to share their masculine gifts with the Church and society, Fr Chandler says it is necessary to stop advocating or focusing only on the needs of women. Women, however, can – and need to – play a powerful role in encouraging their husbands, sons and brothers to become more involved in parish life. Women stepping back from certain roles could also encourage men to step up more, he says.

Men and boys need to be challenged he said, and to have opportunities to gather with other men.

Priests and bishops also need to become more “fatherly” in their pastoral ministry, especially given the rate of fatherlessness in our culture.

“The primary role we have is as the spiritual father. John Paul II said priests need to make themselves a prisoner of the confessional because that’s where they exercise their spiritual fatherhood most clearly.”