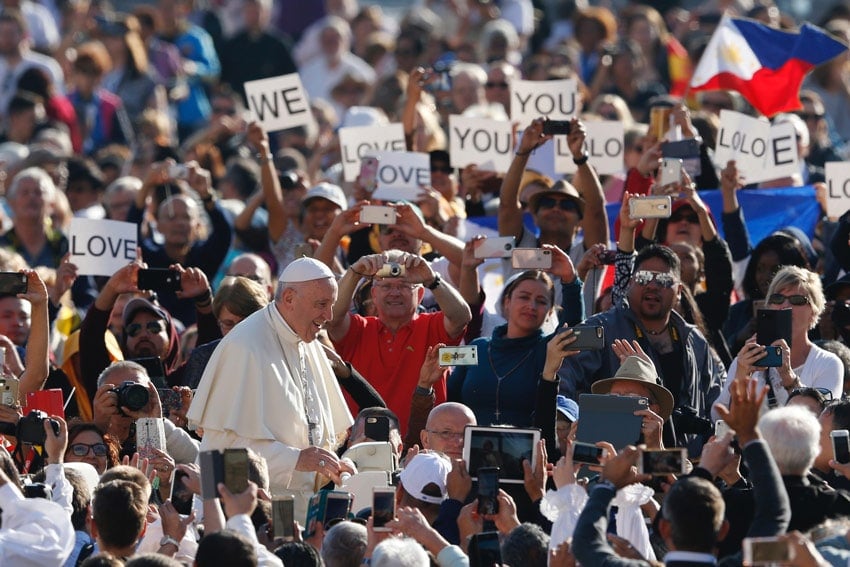 More than 200 Australian Catholic university students and young professionals have signed a remarkable Open Letter to the Fathers of the Synod on Young People, the Faith and Vocational Discernment currently meeting in Rome throughout October.

The letter was written by the President of the Australian Catholic Students Association Christopher Wilks on behalf of its members and young alumni.

Following is the full text:

Synod Fathers, youth ambassadors, and all the faithful participating in the Synod on Young People, Faith and Vocational Discernment.

Cherishing the opportunity presented by a synodal church, we humbly pray for your consideration of this petition.

Forming the young, shaping the Church

The young do not want to shape the Church before the Church can form us. The world is confused.

And in this confusion, the young have nothing to grasp. We want the Synod Fathers to remind the world that God will only deliver us when we cling to Him in love.

His Grace Archbishop Anthony Fisher recently explained to the Australian Catholic Students
Association that Blessed John Henry Newman was a major influence on the fathers of the Second Vatican Council, in their teaching on the dignity of conscience and its need for formation.

It is because of Newman that the Catechism of the Catholic Church describes conscience as ‘the aboriginal Vicar of Christ’.

But even Newman saw the risk that ‘conscience’ could be interpreted as any man’s “prerogative to be his own master in all things”.

Without the Church and everything she offers – divine revelation, tradition, community, and reason itself – conscience has no substance. We need a reliable moral compass. For this, the young need to be well-formed in the truth. We cannot shape the Church when we are not formed.

“Throughout his entire life, Newman was a person converting, a person being transformed,
and thus he always remained and became ever more himself.”

Every one of us, like Newman, is a man or woman converting. How could we ever presume to shape the Church, which as the Mystical Body of Christ contains within it billions of lifetimes of conversion, the hopes and prayers of all the faithful departed, the wisdom and holiness of the entire Communion of Saints, and the conviction and bravery of an ever-growing army of martyrs?

Like past generations, today’s young will only shape the church when we are ourselves formed. Then we will, God willing, take shape as Christ’s hands, eyes, feet and heart.

But we can’t hope to take shape amidst confusion over issues such as contraception, sexuality, communion for divorcees and non-Catholics, married priests and female ordination. Such confusion is borne from senior prelates purposefully employing ambiguous language when addressing such issues, even in the face of Christ’s teachings, the Church Fathers and the clear dogma of the Church.

Such ambiguity is neither charitable nor desired by the youth and needs to be addressed by this Synod. Some of the Synod Fathers wish to avoid a Church of ‘rules’ which fail to encourage a personal relationship with Jesus Christ. However these rules lead us to Christ, they always have.

We need the Church to explain why and how this is. When the Church eschews the truth for policy-speak, young people are left with only superficial banalities to express their beliefs. Deliberately unclear words are, ironically, relied on and repeated with rigidity.

The Church should not discourage young people following its rules in love, nor its
priests from teaching them. As well as clarity in language, we pray for an increase in practices which help satisfy the sacramental needs of our bodies and souls – pilgrimages, confession, devotions, adoration, sacred art, music and architecture.

The world can be an ugly place, and the outward beauty of our churches should be rays
of light in our communities, particularly in the lives of the poor. The times show that the young are searching for meaning beyond flattery.

Many young people are enamoured by public intellectuals such as Dr Jordan Peterson. He doesn’t tell the young that they are fine the way they are. Though he is explicitly agnostic, he repeatedly tells the young: “pick up your cross”.

In their hearts, even people who have little faith somehow know that this image, this
instrument, the cross, gives their suffering meaning. Veiled in the language of psychology, Peterson explores the significance of scripture unapologetically and at length. But Peterson and those like him have a ceiling.

They know some of the truth intuitively, but they do not offer the fullness of truth because they do not have faith. Only the Church can provide real meaning to our world. The Synod Fathers need to accept this mission. The young want the truth, unambiguously.

A worthy Mass and welcoming Church

In his Synodal intervention, Archbishop Fisher apologised for “unbeautiful or unwelcoming
liturgies”. In preparing Australian youth for a Plenary Council, his Grace asked us: how can we ensure that we are praying and worshipping God in ways that are worthy and welcoming?

The balancing of these two concepts of ‘worth’ and ‘welcoming’ is the point of tension for most. Of course we want our churches to be welcoming to everyone, we want as many souls as possible to be received into the Church. But we also want the Mass to be worthy of the profound claim it is making – that the same Jesus Christ of the Gospel descends to the altar body, blood, soul and divinity, in every instance.

The problem is the debate over ‘worth’ and ‘welcoming’ is limited to what form and what tone the Mass should take. This makes the Holy Sacrifice of the Mass look like a battlefield between the faithful, when it should only proclaim the victory of Christ over death, time and sin.

The inescapable truth is that the Mass and what it re-presents is profound. It is no accident that the Last Supper is part of the ultimate series of events of Christ’s earthly ministry. When Jesus says “this is My Body”, it comes after all the parables, sermons, and miracles which, although marvellous, only hint at the overwhelming claim He makes at the Last Supper.

If it took the Apostles such immense preparation at the feet of Christ himself (and even then they didn’t quite get it), how could we possibly hope to make the Mass ‘accessible’ to people today?

No matter how much we try and make it contemporary or easy to understand, the Mass escapes us.

In bringing the Mass down to our level of comfort, we turn a profound claim physically manifested in a glimpse of heaven, into a weird claim which people struggle to take seriously.

Solution: wider use of the Divine Office by the laity

We can ensure a welcoming Church before it comes to Mass. The Synod Fathers should consider encouraging the use of the Divine Office more widely. This would complement the increasingly popular and fruitful practice of Eucharistic adoration in parishes and university chaplaincies.

Imagine the widespread practice of vespers in the same vein as the Community of Sant’ Egidio’s evening prayer, encountered by so many young people and pilgrims in Rome at the Basilica of Santa Maria in Trastevere.

A warm, candle-lit refuge from the world, passers-by wander in, clueless, are handed a psalm book by a kind hand, and then gently guided by the community in prayer.

This could be easily replicated around the world. The Psalms are appropriate for welcoming  people into the Church, as they continuously hint at Jesus’ coming, preparing us for His awesome claim.

And so we can achieve a beautiful and welcoming service, in an ancient Catholic setting. Perhaps solutions such as this are part of the answer to retaining a Mass that is worthy, and promoting a Church that is welcoming?

Newman once meditated on Mary as the Mystical Rose.

“How did Mary become the Rosa Mystica, the choice, delicate, perfect flower of God’s
spiritual creation? It was by being born, nurtured and sheltered in the mystical garden or
Paradise of God.”

Mary, as the greatest of God’s creation, is a model to all of God’s people, no less for the young.

But as Newman explains, Scripture makes use of the figure of a garden when it would speak of heaven and its blessed inhabitants. So how can we become flowers in the Paradise of God, like Mary?

We do not find flowers in the mountain-crag, or rich fruit in the sandy desert. We will not find heaven wandering the wasteland around us. We will find it by being born again in Baptism, nurtured by the Sacraments and sheltered by the Truth in the Mystical Body of Christ, the Church.

The young do not want to look elsewhere any more. We do not only want accompaniment in the wasteland. Synod Fathers, plant us in the mystical garden.

Yours in the Lord,