Dear Father, Over the years I have seen Mormons knocking on doors and occasionally they have come to my house. They are exceptionally polite and very impressive. What is the background of the Mormons and what are their main beliefs?

The Mormons, properly known as The Church of Jesus Christ of the Latter-day Saints, were founded by Joseph Smith in upstate New York early in the nineteenth century.

In March 1830, Smith published the Book of Mormon, which he claimed was a translation of some golden plates containing the religious history of an ancient American civilisation compiled by the prophet-historian Mormon.

Smith claimed that an angel had directed him to the golden plates, buried in the Hill Cumorah. In 1832 he added an account of a vision he had had of the Father and the Son when he was about 14, sometime in the early 1820s.

This vision came to be regarded by some Mormons as the most important event in human history after the life and death of Jesus Christ.

“On 6 April 1830 Smith founded what he called the Church of Christ. The movement gradually spread West and communities were established in Ohio, Illinois and Missouri, with some members practising polygamy.”

According to Smith, a departure from the original principles of Jesus Christ, known as the Great Apostasy, took place shortly after the ascension of Christ into heaven. It brought about the corruption of Christian doctrine by various philosophies, with followers dividing into different groups.

Mormons claim that the martyrdom of the apostles led to a loss of the priesthood, but the early Church as Christ intended it, with a valid priesthood, was restored through Joseph Smith.

On 6 April 1830 Smith founded what he called the Church of Christ. The movement gradually spread West and communities were established in Ohio, Illinois and Missouri, with some members practising polygamy.

There was often opposition from locals and in 1844 Smith was arrested and he and his brother Hyrum were killed by a mob in Carthage, Illinois. Brigham Young, a close associate of Smith’s, then became the leader of most of the movement.

To prevent conflict with the local people, Young led the members first to Nebraska and then to Utah, where they became firmly established. From there they sent missionaries to other countries, resulting in numerous converts, many of whom later migrated to the US and settled in Utah.

Although polygamy continued to be practised by many Mormons, in 1904 the church president disavowed the practice before the US Congress and issued a manifesto calling for all plural marriages to cease. The church excommunicated those practising polygamy, and today it distances itself actively from any “fundamentalists” who continue the practice.

Among the practices to be lived by Mormons are studying the scriptures, daily prayer, regular fasting, attendance at Sunday worship services, participation in church activities on weekdays, refraining from work on Sundays when possible, and high standards of honesty, integrity, obedience to the law, chastity outside marriage and fidelity within marriage.

Mormons do not accept same-sex marriage. Observant Mormons contribute ten per cent of their income to the church and many, especially the young, engage for a time in a proselytising mission, during which they dedicate all their time to the church, without pay.

“They believe that before humans began their life on earth they pre-existed as spirit children of God.”

Mormons follow the Word of Wisdom, a code of health that forbids the use of tobacco, alcohol, coffee and tea, the use of illegal drugs and the abuse of prescription drugs, gambling and the viewing of pornography. Family life is especially fostered by Mormons, who often have large families.

The Mormon scriptures are the Bible, the Book of Mormon and the revelations and writings of Joseph Smith. Jesus Christ is their central figure. They believe in a “friendly universe” governed by a God whose aim it is to bring his children to immortality and eternal life.

They believe that before humans began their life on earth they pre-existed as spirit children of God. They believe that Jesus, the eldest of God’s children, came to earth as the literal Son of God to conquer sin and death so that God’s other children could return to him.

According to Mormons, every person on earth will be resurrected, and nearly all of them will be received into various kingdoms of glory. In order to be accepted into the highest kingdom a person must fully accept Christ through faith, repentance, and ordinances such as baptism and the laying on of hands. 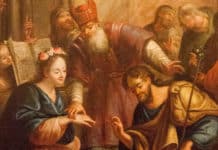 Q&A with Fr John Flader: Sharing the suffering of others