“In your last column you wrote about some of the prophecies of the Messiah in the Old Testament, which I found very interesting. What are some of the other prophecies and did Jesus ever say he was the awaited Messiah?”

Another important prophecy is that the Messiah would have to suffer. Psalm 22 is especially graphic in portraying the sufferings Jesus in fact underwent, and indeed Jesus quoted the psalm from the Cross: “My God, my God, why have you forsaken me?”

The psalm goes on to say: “They have pierced my hands and feet – I can count all my bones – they stare and gloat over me; they divide my garments among them, and for my clothing they cast lots” (Ps 22:1, 16-18).

Isaiah, in chapters 50-53, describes what has come to be called “the suffering servant”, another graphic portrayal of the Messiah’s suffering. Among the verses especially applicable to Jesus are: “I gave my back to those who struck me, and my cheeks to those who pulled out the beard; I hid not my face from shame and spitting” (Is 50:6).

“Behold, my servant shall prosper, he shall be exalted and lifted up, and shall be very high.

As regards Jesus’ suffering for our sins Isaiah says: “But he was wounded for our transgressions, he was bruised for our iniquities; upon him was the chastisement that made us whole, and with his stripes we are healed” (Is 53:4-5) “… yet he bore the sin of many, and made intercession for the transgressors” (Is 53:12). 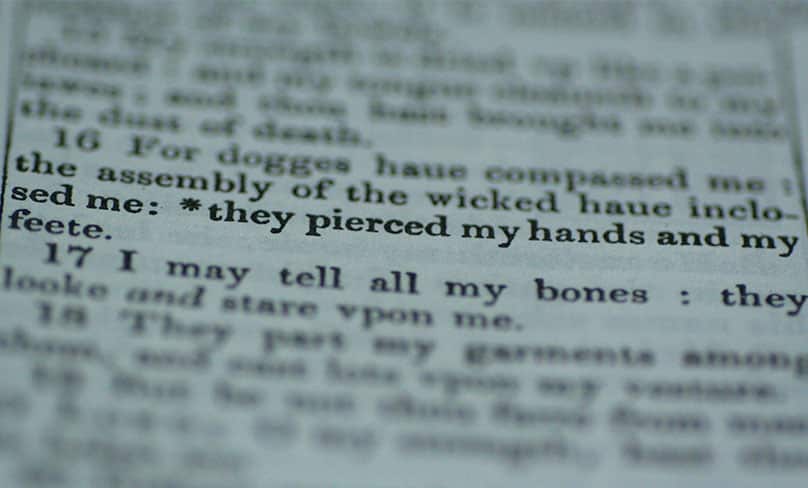 Jesus referred these passages to himself when he told the two disciples on their way to Emmaus: “O foolish men, and slow of heart to believe all that the prophets have spoken!

Was it not necessary that the Christ should suffer these things and enter into his glory?’

And beginning with Moses and all the prophets, he interpreted to them in all the Scriptures the things concerning himself” (Lk 24: 25-27).

Then too, the Messiah would come riding on a donkey: “Behold, your king comes to you; triumphant and victorious is he, humble and riding on a donkey, on a colt the foal of a donkey… and he shall command peace to the nations; his dominion shall be from sea to sea, and from the River to the ends of the earth” (Zech 9:9-10).

Jesus fulfilled this prophecy in his entry into Jerusalem. St John relates: “So they took branches of palm trees and went out to meet him, crying, ‘Hosanna! Blessed is he who comes in the name of the Lord, even the King of Israel!’ And Jesus found a young donkey and sat upon it; as it is written, ‘Fear not, daughter of Zion; behold, your king is coming, sitting on a donkey’s colt!’” (Jn 12:13-15). St Mark describes how the people themselves realised that Jesus was their Messiah when they cried out, “Blessed is the kingdom of our father David that is coming!” (Mk 11:10)

As we have seen, Jesus applied the verses of Isaiah about the suffering servant to himself as the Messiah. Also, when the Samaritan woman at the well said that she knew the Messiah was coming, Jesus said, “I who speak to you am he” (Jn 4:26).

And when in his Passion Jesus was called before the Sanhedrin and the high priest asked him, “Are you the Christ, the Son of the Blessed?”, Jesus answered, “I am; and you will see the Son of man sitting at the right hand of Power, and coming with the clouds of heaven” (Mk 14:61-62).

If Jesus so clearly fulfilled the prophecies of the Messiah, and said he was the Messiah, why didn’t more of the Jews believe in him and become his disciples? There can be a variety of reasons, but one of the most compelling is that at the time of Jesus the idea of the Messiah had become politicised and the people were expecting a Messiah who would free them from the domination of the Romans.

But Jesus obviously had not come for that, his kingdom was not of this world, and therefore many Jews did not believe in him.