Q: I say the beautiful Memorare prayer every day and have always thought it was written by St Bernard of Clairvaux. Recently a friend said this is not certain. Do we know who wrote it?

First, let us look at the words of the prayer which, as you say, are very beautiful. The name Memorare, meaning “remember”, is the first word in the Latin version of the prayer.

There are various English translations of the prayer but the following one is quite common:

“Remember, O most gracious Virgin Mary, that never was it known that anyone who fled to thy protection, implored thy help, or sought thy intercession, was left unaided.Inspired by this confidence, I fly unto thee, O Virgin of virgins, my Mother. To thee do I come, before thee I stand, sinful and sorrowful. O Mother of the Word Incarnate, despise not my petitions, but in thy mercy, hear and answer me. Amen.”

As you can see, the prayer is one of confidence in the power of Mary’s intercession. It is only right to have complete trust in Our Lady. After all, she is the Mother, Daughter and Spouse of God, and God will answer her every request.

The one who says the prayer comes before Our Lady with humility, “sinful and sorrowful”, and, trusting in her mercy, begs her for some favour. It is a good idea when saying the prayer to have some particular intention in mind.

As regards its origin, the Memorare is a part of the longer fifteenth-century prayer “Ad sanctitatis tuae pedes, dulcissima Virgo Maria”, meaning “At the feet of your holiness, most sweet Virgin Mary”.

We are not certain who composed the Memorare. The link to St Bernard of Clairvaux may stem from confusion with Fr Claude Bernard, a French priest who popularised the prayer in the seventeenth century, having learned it from his father. He died in 1641.

Fr Bernard’s devotion to Mary under the title Comforter of the Afflicted moved him to promote recourse to Mary’s intercession among the poor and the condemned prisoners. Fr Herbert Thurston S.J., in his book Familiar Prayers: Their Origin and History (1963), writes: “Fr Claude Bernard, known as the ‘Poor Priest’, zealously dedicated himself to the preaching and aiding of prisoners and criminals condemned to death.

Trusting his charges to the care and intercession of the Blessed Virgin Mary, Fr Bernard employed the Memorare extensively in his work of evangelisation to great effect.

Many a criminal was reconciled to God through his efforts. At one time he had more than 200,000 leaflets printed with the Memorare in various languages so he could distribute the leaflets wherever he felt they would do some good.” 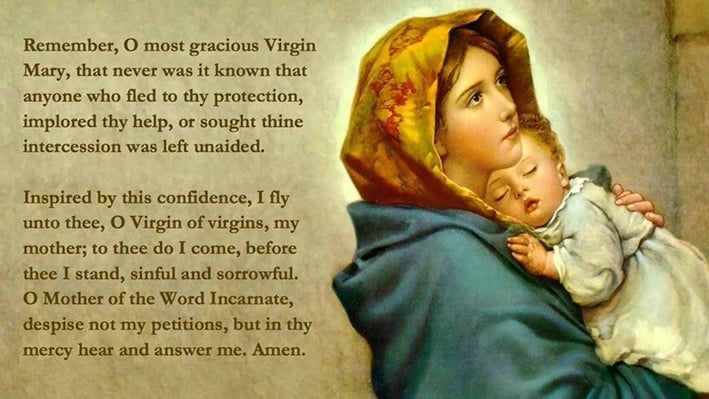 Part of the reason Fr Claude Bernard held the Memorare in such high regard was that he thought he had been miraculously cured by saying it when he was gravely ill. After saying the prayer, he began to get well again.

Feeling himself unworthy of such a miracle, he attributed his cure to natural causes. But then an Augustinian Brother told him Our Lady had appeared to him and had told him that Fr Bernard’s cure was due to her intercession. Fr Bernard then begged God’s forgiveness for his lack of faith and gratitude.

Another person who received a great favour through the Memorare was the Frenchman Alphonse Ratisbonne.

Born in 1814, he was a nominal Jew but when his older brother converted to the Catholic faith and became a priest, Alphonse came to hate both him and the Catholic Church. He also became a rabid atheist.

One day, on a visit to Rome, Alphonse met a Catholic convert who knew his priest-brother. The convert challenged Alphonse to wear the Miraculous Medal and to say the Memorare every morning and night.

Alphonse accepted, thinking it would show up the ridiculous nature of the Catholic religion. Sometime later, when the two entered a Catholic church in Rome, Alphonse saw a bright light and in it Our Lady as she appeared on the medal.

Several days later he was received into the Catholic Church and became a Jesuit priest.

The Memorare became popular in England by way of France and it was included in the 1856 edition of Bishop Richard Challoner’s The Garden of the Soul. Fr Herbert Thurston SJ considered the Memorare one of the prayers most of the faithful knew by heart.

It is a beautiful and powerful prayer, one we would do well to say everyday.