Dear Father, If someone has asked for euthanasia or assisted suicide, is a priest allowed to give them the last sacraments before they die?

This is a very important question and one which, unfortunately, priests will face increasingly now that more and more states and territories are legislating for euthanasia and assisted suicide.

It is to be hoped that Catholics, at least practicing ones, will not request euthanasia so that priests will not face this question, but we have to be prepared.

Fortunately, the Congregation for the Doctrine of the Faith, in the Letter Samaritanus bonus, dated 14 July 2020, has given us some criterion.

The Letter stresses the importance of pastoral care for all people at the end of life, which can be of great assistance in discouraging someone from asking for euthanasia: “The quality of love and care for persons in critical and terminal stages of life contributes to assuaging the terrible, desperate desire to end one’s life” (n. V, 10). To be sure, if dying people receive considerable love and support, they are much less likely to think of ending their own life.

“Due to the lack of genuine contrition, the priest cannot grant absolution of the sin, nor the sacrament of Anointing of the Sick.”

If, however, someone does ask for euthanasia and requests the sacraments before they die, the criterion is clear.

The person is asking for absolution for their sins, but this would necessarily include the sin of intending to end their life, either through the hand of someone else who gives them a lethal injection or by themselves when they swallow a lethal substance.

How can they be sorry for this sin when they fully intend to carry it out?

The Letter explains: “With respect to the Sacrament of Penance and Reconciliation, the confessor must be assured of the presence of the true contrition necessary for the validity of absolution which consists in ‘sorrow of mind and a detestation for sin committed, with the purpose of not sinning for the future.’

“In this situation, we find ourselves before a person who, whatever their subjective dispositions may be, has decided upon a gravely immoral act and willingly persists in this decision. Such a state involves a manifest absence of the proper disposition for the reception of the Sacraments of Penance, with absolution, and Anointing, with Viaticum” (n. V, 11).

Due to the lack of genuine contrition, the priest cannot grant absolution of the sin, nor the sacrament of Anointing of the Sick.

Is there a circumstance in which he might be able to confer these sacraments?

The answer is yes, but only if the person resolves not to proceed with the euthanasia or assisted suicide: “Such a penitent can receive these sacraments only when the minister discerns his or her readiness to take concrete steps that indicate he or she has modified their decision in this regard. Thus, a person who may be registered in an association to receive euthanasia or assisted suicide must manifest the intention of cancelling such a registration before receiving the sacraments” (ibid.).

If the person is not in these dispositions, family members and carers can, and should, continue to look after him in the hope that they may help him change his mind.

“… those who spiritually assist these persons should avoid any gesture, such as remaining until the euthanasia is performed, that could be interpreted as approval of this action. Such a presence could imply complicity in this act.”

“It is necessary to remain close to a person who may not be in the objective condition to receive the sacraments, for this nearness is an invitation to conversion, especially when euthanasia, requested or accepted, will not take place immediately or imminently. Here it remains possible to accompany the person whose hope may be revived and whose erroneous decision may be modified, thus opening the way to admission to the sacraments” (ibid.). As regards someone already unconscious, “The priest could administer the sacraments to an unconscious person sub condicione if, on the basis of some signal given by the patient beforehand, he can presume his or her repentance” (ibid.).

Finally, “those who spiritually assist these persons should avoid any gesture, such as remaining until the euthanasia is performed, that could be interpreted as approval of this action.

Such a presence could imply complicity in this act.

This principle applies in a particular way, but is not limited to, chaplains in the healthcare systems where euthanasia is practiced, for they must not give scandal by behaving in a manner that makes them complicit in the termination of human life” (ibid.).

Q&A with Fr John Flader: The courage to be faithful 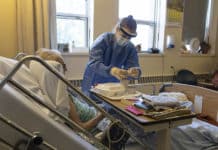 Guest Contributor - November 29, 2020
The cover photograph of Windschuttle’s book is memorable: it is of Cardinal Pell in handcuffs on his way to attend a hearing in the Victorian Court of Appeal on 5 June 2019

Monica Doumit: a law that shirks its duty