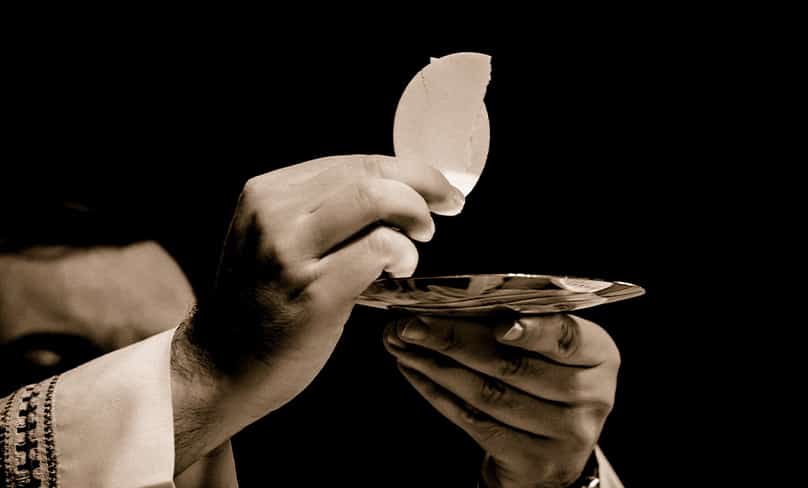 “Dear Father, I know you have written about recent Eucharistic miracles in Argentina and Poland, and now I hear there has been another one in Mexico. Is this true?”

There was indeed a Eucharistic miracle in Mexico in 2006. It took place on October 21 that year during a retreat in the parish of St Martin of Tours in Tixtla, in the diocese of Chilpancingo-Chilapa.

The parish priest, Fr Leopoldo Roque, was distributing Communion during Mass assisted by Fr Raymundo Reyna Esteban, who was leading the retreat, and a religious sister.

The sister approached Fr Raymundo with tears in her eyes and showed him a host which had begun to give off a reddish substance. They put the host aside and informed the bishop.

The bishop, Most Reverend Alejo Zavala Castro, then convened a theological commission to investigate the matter to determine if this was a hoax or a genuine miracle.

In October 2009, he invited Bolivian-born Dr Ricardo Castañón along with a team of other scientists to conduct research on the host.

He chose Dr Castañón Gómez because the scientist had investigated a Eucharistic miracle that took place in Buenos Aires in 1996, invited by Archbishop Jorge Bergoglio, later to become Pope Francis.

Crucial to that investigation was the intervention of Australians Michael Willesee and Ron Tesoriero, who in 2004 had a sample of the Argentinian host analysed by forensic pathologist Frederick Zugibe in New York.

Zugibe found that the host had turned into human heart tissue from the left ventricle and that the person from whom the sample was taken had suffered trauma about the chest (cf. J. Flader, Question Time 3, q. 367).

Dr Castañón’s team concluded their investigation of the Mexican host in October 2012 and presented their conclusions on 25 May 2013 during an international symposium organised by the diocese of Chilpancingo. They reported the following:

1. The reddish substance analysed corresponds to blood in which there are haemoglobin and DNA of human origin.

2. Two studies conducted by eminent forensic experts with different methodologies have shown that the substance originates from the inside, excluding the hypothesis that someone could have placed it from the outside.

3. The blood type is AB, similar to the one found in the host of Lanciano and in the Holy Shroud of Turin.

4. A microscopic analysis of magnification and penetration reveals that the upper part of the blood has been coagulated since October 2006.

Moreover, the underlying internal layers reveal, in February 2010, the presence of fresh blood.

The tissue in question appears lacerated and with recovery mechanisms, exactly as occurs in a living tissue.

7. The immune-histochemical studies reveal that the tissue corresponds to the muscle of the heart (Myocardium).

In view of the scientific results and the conclusions reached by the theological commission, on 12 October 2013 Bishop Zavala Castro issued a Pastoral Letter with the following statement: “This manifestation brings us a marvellous sign of the love of God that confirms the Real Presence of Jesus in the Eucharist… In my role as Bishop of the Diocese I recognise the supernatural character of the series of events relating to the Bleeding Host of Tixtla…. I declare the case a ‘Divine Sign.’ The event does not have a natural explanation. It does not have paranormal origin. It is not traceable to manipulation of the enemy.”

Surprisingly, in all the bleeding hosts and other Eucharistic miracles where human DNA was found, scientists have not been able to sequence the DNA to obtain a genetic profile.