Dear Father, I am now in my 80s and was a little surprised when many years ago the practice of the laity receiving Communion from the chalice was introduced, since for most of my life it was not allowed. Can you tell me the history of the practice and the reasons for it?

I will begin my review of the history in this column and will continue it in the next, using especially Mario Righetti’s history of the liturgy, Storia Liturgica. It is clear that the practice of giving Communion to the lay faithful under the species of both bread and wine goes back to the early centuries of the Church and it continued until the twelfth century.

In the early centuries it was considered wrong not to receive Communion under both species. Thus, in the fifth century, Pope St Leo the Great denounced the “sacrilegious simulation” of the Manicheans of his time, who received Communion only under the species of bread. He ordered them to be expelled from the assembly of the faithful. At the end of that century, Pope Gelasius I (492-496 AD) denounced the “grave sacrilege” of the Church in Calabria, Italy, where Communion was given only under the species of bread.

“That custom, also known as intinction, found its way to the West in the middle of the eleventh century …”

Interestingly, in 726 AD, St Boniface in Germany asked Pope Gregory II whether, in view of the large number of communicants, it was permissible to use more than one chalice for the consecration of the Precious Blood, and the answer was negative, since Our Lord only consecrated one chalice.

To make the reception of the Precious Blood more hygienic it was proposed at one stage that the faithful should receive it through a metallic straw made of silver or gold. It seemed preferable to many, however, rather to adopt the custom of the Greeks in the East who, from the end of the eighth century, gave Communion with pieces of the host dipped in the Precious Blood. That custom, also known as intinction, found its way to the West in the middle of the eleventh century, where it was accepted by some but rejected by others. 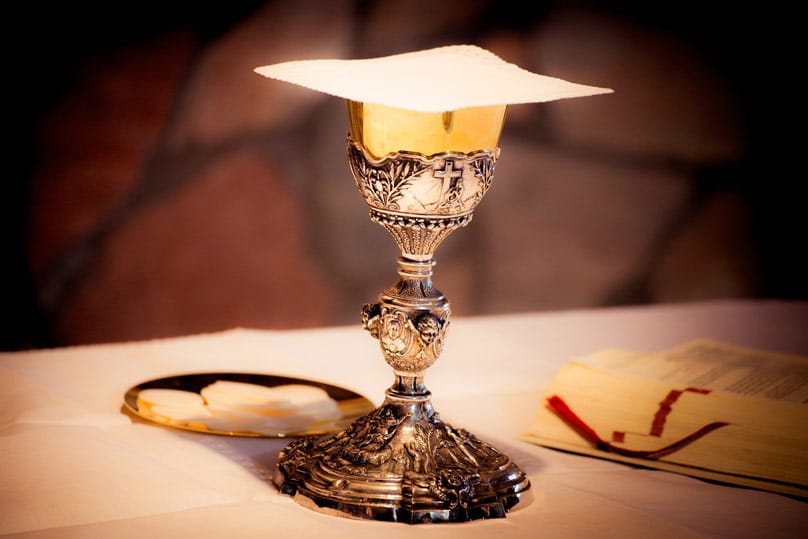 In England intinction was strenuously defended by Ernulphus, Bishop of Rochester. It was also adopted in the monastery of Cluny, but the Council of Clermont in 1095 allowed it only in cases of necessity. Pope Paschal II (1099-1118), who had been a Cluny monk, in a letter to Pontius, the Abbot of Cluny, stipulated that the custom of offering the host and the Precious Blood separately was to be maintained always in the Church, except for children and the sick. The best theologians of the time disapproved of the practice of intinction, among them Gratian, Hugo of St Victor, Pope Innocent III and St Thomas Aquinas. The latter expressly forbade intinction, which soon fell into disuse in ordinary practice, except for the sick.

The difficulties that led to the practice of intinction gradually brought about the elimination altogether of giving Communion under the species of wine. This was attested to first by Rodolphus, Abbot of St Troud, near Liege, around 1110. He argued that the whole Christ was already present under the species of bread alone, and so the custom of Communion only under the species of bread gradually spread everywhere. St Thomas Aquinas, who died in 1274, spoke of it as a practice already prevalent in his time, and he recommended it as a way of avoiding irreverence and spilling (cf. STh III, q. 80, art. 12).

“Nonetheless, the custom of receiving under both species continued here and there at least until the beginning of the fifteenth century, when the Council of Constance in 1415 forbade it altogether.”

At the University of Paris, Alexander of Hales, who died in 1245, said that it was only permissible for lay people to receive the Eucharist under the species of bread, as was done almost everywhere in his day. Nonetheless, the custom of receiving under both species continued here and there at least until the beginning of the fifteenth century, when the Council of Constance in 1415 forbade it altogether.

Various reasons were proposed at the time of the Council for not giving Communion from the chalice: the possibility of spilling when the chalice was carried from one place to another, the natural repugnance of receiving under the form of wine, especially by women, the fact that the chalice would become unclean after many had drunk from it, the difficulty in preserving the wine lest it turn to vinegar, the excessive cost, the possibility that the wine would freeze in the cold months of the winter, etc.