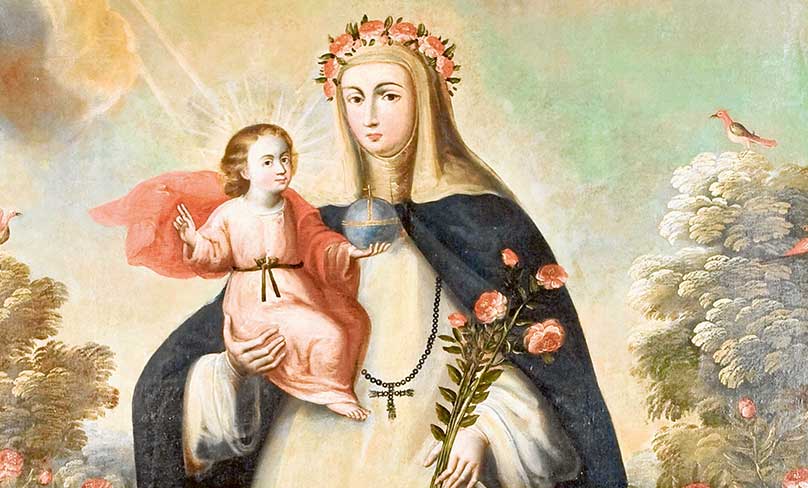 “Dear Father, A friend recently told me that St Rose of Lima did great penances in her lifetime. Is this true and can you tell me more about this saint?”

St Rose was the first person from the Americas to be canonised a saint. She was from Lima, Peru, and was born Isabel Flores de Oliva on 20 April 1586. She was one of the many children of Gaspar Flores, born in Spain and a cavalryman in the Spanish army, and his wife, María de Oliva y Herrera, a native of Peru. When Isabel was confirmed in 1597 by the Archbishop of Lima, Toribio de Mogrovejo who would himself later be declared a saint, she took the name Rose.

As a child Rose was already known for her great piety and love for everything relating to God. She had a great devotion to the infant Jesus and his Blessed Mother, and spent hours in prayer before their altar. She was very obedient to her parents’ instructions and was always busy, very attentive to her studies and to her work in the home, especially her needlework.

As you say, Rose was given over to great penances, and these began when she was still young. In imitation of St Catherine of Siena, when still a young girl she began to fast three times a week and she performed other severe penances in secret. When she became aware that men were admiring her for her beauty she cut off her hair and smeared pepper on her face. She began to wear clothing made of rough cloth and to roughen her hands by hard work. Against the objections of her parents and friends, who wanted her to marry, she rejected all those who sought her hand.

She spent many hours contemplating the Blessed Sacrament and she received Communion daily, an extremely rare practice at the time. When still young Rose was determined to take a vow of virginity, but since her parents were opposed to it she joined the Third Order of St Dominic, like St Catherine of Siena. Finally when she was 19, with her parents’ permission, she took a vow of perpetual virginity and began to wear the habit of a Dominican tertiary. She continued to live at home, where her parents gave her a room to herself.

At that time she had strong temptations against chastity, faith and perseverance, which caused her considerable anguish and moved her to intensify her mortification. But Our Lord revealed himself to her frequently, strengthening her with the knowledge of his presence and consoling her with manifestations of his love. This filled her with such peace and joy that it left her in ecstasy for hours at a time.

Over time Rose began to fast everyday and then to abstain permanently from meat. She ended up eating only the coarsest food, just sufficient to stay alive. She allowed herself only two hours of sleep each night in order to devote more time to prayer. She wore a heavy crown made of silver, which had small spikes on the inside, concealed by roses, in imitation of the crown of thorns of Our Lord, and she had an iron chain around her waist.

She went whole days without food, save for a drink of gall mixed with bitter herbs. When she could no longer stand, she lay down on a bed she had made covered with broken glass, stone, potsherds and thorns. She admitted that the thought of lying down on it filled her with dread. She offered these penances in expiation for the many offences against Our Lord, for the idolatry of her country, for the conversion of sinners and for the souls in Purgatory.

Rose was very much given over to helping the sick and the hungry in the area and she often took them to her room to look after them. She loved sewing and sold her fine needlework, lace and embroidery, and the flowers she had grown to help her family and the poor. When her work allowed it, she retired to a small grotto she had built with the help of her brother in their small garden, where she would spend long hours in solitude and prayer, sometimes staying there overnight. With the consent of her confessor she became practically a recluse in the grotto, except for her visits to the Blessed Sacrament.

After 11 years of this rigorous life she died on 24 August 1617 at the age of just 31. It is said that she prophesied the date of her death. She was canonised in 1671 by Pope Clement X and her feast is celebrated in the universal calendar on August 23. She is often depicted with a crown of roses on her head.