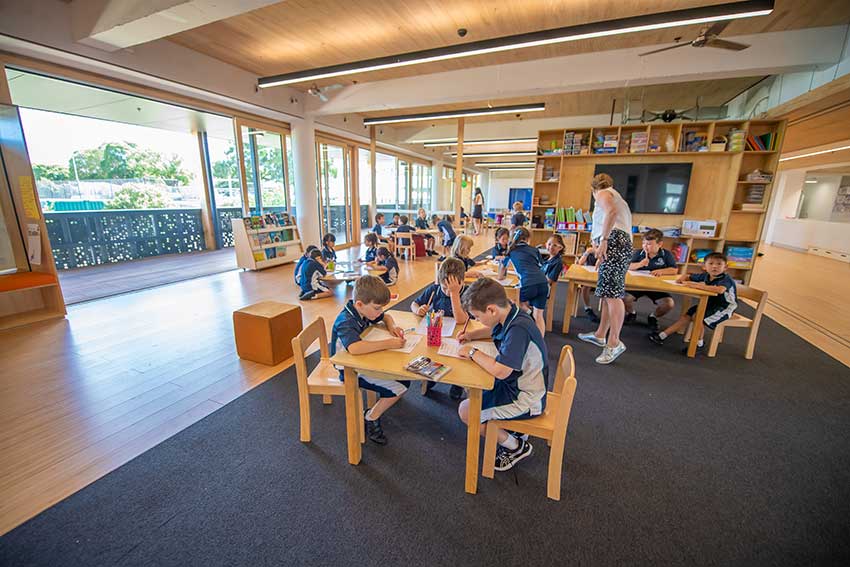 Students at Our Lady of the Assumption Primary in North Strathfield work in the classroom. NSW Premier Gladys Berejiklian’s announcement would see the state’s 944-strong non-government schools receive half a billion dollars in capital funding over the next four years, with $6 billion going to the state’s 2200-plus government schools.

Premier Gladys Berejeklian has promised a massive half a billion dollar capital funding injection into NSW non-government schools over the next four years to help build classrooms and meet the demand for growing enrolments.

A record $500 million would be used by non-government schools to build, extend or upgrade school facilities to provide more student places in growing communities.

The announcement triples the Government’s capital grants to the 944-strong non-government schools sector which educates one-third of NSW students. It is the largest increase ever provided.

Public schools to get $6 billion

The funding package is in addition to the State Government’s $6 billion investment over the next four years to deliver more than 170 new and upgraded public schools across the State.

The funding move for non-government schools was immediately welcomed by the State’s Catholic education sector and by Archbishop Anthony Fisher OP.

He also supported the Government’s funding plan for the state’s 2200-plus government schools.

Mr McInerney said CSNSW prioritises the capital funding it receives from government to those Catholic schools in need and with the least ability to raise project funds themselves.

“This brings a focus to needy schools serving low socio-economic communities, schools in fast growing areas and schools with an urgent need for new or improved learning facilities.”

Archbishop Fisher welcomed the government’s commitment saying it recognises the role Catholic schools play in educating more than a quarter of a million NSW students.

“School education is a partnership between the state and federal governments and education providers such as the Catholic Church, which has educated Australian students for almost 200 years.

“This funding increase will help Catholic education build the new classrooms we need to meet our share of expected student growth.

“We are especially pleased that the NSW Government has locked in this support for the next four years,” Archbishop Fisher said.

Council of Catholic School Parents NSW/ACT executive director Peter Grace welcomed the commitment saying it would go a long way towards easing some of the current financial stress on Catholic school parents to raise money over and above their school fees to build, upgrade and expand Catholic schools.

“Our schools educate more than 250,000 students and we are currently planning for growth of almost 10,000 additional students over the next three years, which will require up to 11 new schools and the expansion of 41 existing schools,” Mr Grace.

“I congratulate Catholic Schools NSW for working to achieve this pledge of increased funding from the Coalition, and we look forward to the Labor Opposition meeting or bettering this commitment.”

Parents have been the workhorses

Mr McInerney said Catholic education has relied on parents and school communities to fund some 90 per cent of capital works in NSW Catholic schools.

“That commitment from our hard-working and dedicated parents will continue; this additional government funding will support more projects and bring them online sooner.

“Last year, 41 NSW Catholic schools lodged funding applications for capital works worth $158 million – but CSNSW could only partially support 24 projects because we only had $58 million in State and Federal Government capital funding to distribute. To put that into context – $58 million does not cover the cost of land and construction for a new K-12 school in outer suburban Sydney.”

“This is a great day for Catholic schooling in NSW; our parents and families considering a Catholic education for their children can have even more confidence in our sector.”