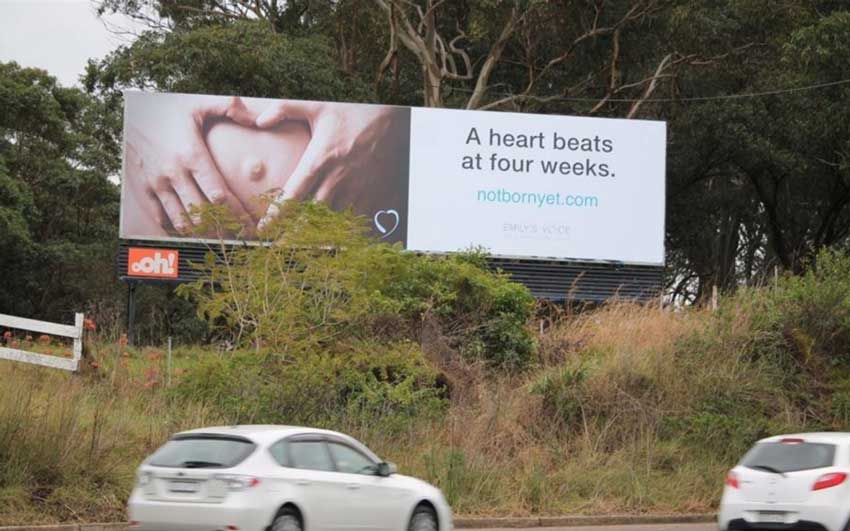 Pro-life advocates say companies are increasingly fearful of offending those who support abortion, after their ad was removed from a NSW billboard.

Emily’s Voice CEO Paul O’Rourke said he was disappointed that advertising company Ooh Media pulled an approved advertisement from a billboard along the Pacific Highway in the Lake Macquarie suburb of Belmont after it was alerted to an online petition by Nine News begun by a local with a mere 14 Facebook followers.

Local Shaynie Croese launched her petition on 20 July after taking exception to the ad which shows an image of a woman’s pregnant stomach alongside the words “A heart beats at four weeks”.

Ooh Media removed the ad early on 25 July despite having earlier approved it against the relevant advertising codes. It comes a month after Transport Minister Andrew Constance ordered the same ad to be removed from two buses in the Newcastle area after one Facebook complaint.

While Nine News reported the ad was removed after a “backlash from the community”, a spokesperson for Ooh Media confirmed that the decision was made in response to media coverage of the petition.

“We are disappointed Ooh Media has buckled to pressure,” said Mr O’Rourke.

“With the push for decriminalisation of abortion in NSW it has become a hot issue again so [companies] are very sensitive to anything that’s pro-life.”

In a statement Mr O’Rourke said that abortion is “such a protected and revered procedure, that any attempt to open discussion in a sensitive and creative manner, or provide information to encourage women to continue an unplanned or crisis pregnancy is met with swift and ferocious opposition”.

The same ad appeared without incident a few years ago on another Ooh billboard only 200 metres away, he added.

“Ooh has made a commercial decision, not a logical or moral one,” he said.

Ooh Media’s spokesperson said that the advertisement was reviewed against advertising codes earlier this year and “based on the fact it did not breach any of these, was accepted to be run on one of our sites”.

“However upon being made aware of concerns raised with the media placements of this advert by other media outlets, and respecting the fact that it could cause offence to a significant section of the community, the advert was put under the microscope of our review panel which deemed that the advert should be removed as it did not meet with our own guidelines,” he said.

The Catholic Weekly requested a copy of Ooh Media’s internal guidelines with an indication of where the advertisement was in breach, but these have not been provided.

Emily’s Voice will now launch a petition on its website asking both Minister Constance and Ooh Media to review their decisions and reinstate the ads.

“We’re trying to highlight to them that we don’t understand what’s offensive about it,” Mr O’Rourke said.

Ms told Nine News that “a lot of people are outraged that in 2019 we still have organisations that are allowed to have a billboard that is basically just telling women what to do with their bodies.”

“We are a secular state now and have been for a long time. Fair enough these organisations have a belief, but that highway is a public domain.”