Pope Francis has asked his international Council of Cardinals to study the way the church vets, identifies and appoints bishops around the world, looking particularly at the qualities needed in a bishop.

Near the end of the council’s meetings with the pope from 14-16 September, Jesuit Fr Federico Lombardi, Vatican spokesman, briefed reporters on its work.

While one of the main tasks of the nine-member council is to assist Pope Francis with the ongoing reorganisation of the Roman Curia, Fr Lombardi said that from the beginning Pope Francis said he wanted the group to advise him on matters of church governance in general. With more than 150 new bishops being named each year in the Latin-rite church, identifying suitable candidates is a normal part of the governance of the universal church, the spokesman said.

“There is a long process” for naming bishops, Fr Lombardi said. It includes “questionnaires that are sent out to people who may know the candidates and then the information is gathered, usually by the nunciature,” and recommendations are forwarded either to the Congregation for Bishops or, in the case of the church’s mission lands, to the Congregation for the Evangelisation of Peoples. The congregations make recommendations to the pope.

Obviously, Fr Lombardi said, the key part of the process is formulating the questions and collecting information based on the characteristics essential for a bishop “in the world today, what might be the requirements and, therefore, what questions should one be attentive to in (developing) the questionnaires.”

The need to review the questions and the process as a whole is constant, he said.

A statement issued after the meeting said, “naturally the theme will need to be explored further and developed in collaboration” with the Roman Curia offices assisting the pope in identifying candidates.

The Council of Cardinals also continued an earlier discussion introduced by Cardinal Sean P. O’Malley of Boston, president of the Pontifical Commission for the Protection of Minors, “especially with regard to the possibility of accelerating the resolution of the many cases still pending” of clerics accused of sexually abusing children and vulnerable adults, the statement said.

As for the planned reorganisation of the Roman Curia, the cardinals discussed a possible preamble to the papal constitution setting out a new structure for the church’s central offices, but Fr Lombardi said it appeared that the project as a whole is not approaching completion.

On the other hand, he said council members gave Pope Francis a formal proposal for establishing a Congregation for Laity, Family and Life, which would bring together the current pontifical councils for the laity and for the family and would place the Pontifical Academy for Life under the new office’s jurisdiction.

The council members had been discussing such a move for months. Pope Francis asked Italian Cardinal Dionigi Tettamanzi, the retired archbishop of Milan, to do a feasibility study on the idea. The council’s proposal to the pope was made after they had heard from Cardinal Tettamanzi, Fr Lombardi said.

Discussion is continuing about also establishing a new Congregation for Charity, Justice and Peace, which would bring together three existing pontifical councils responsible for promoting Catholic charity, promoting justice and peace and providing pastoral assistance to migrants, refugees and other itinerant peoples.

Fr Lombardi said the Council of Cardinals had not yet reached the point of making a definitive proposal about that new congregation.

The council will meet again from 10-12 December, he said. 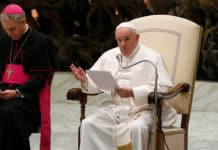 ‘I am close to the people of Australia,’ says Pope Francis 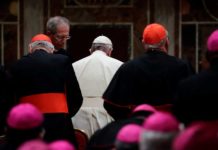 All hands on deck getting snacks to fireys

Simcha Fisher: In praise of litanies