Pope Francis has written to the Bishop of Lismore Greg Homeming OCD to express his “heartfelt solidarity and closeness in prayer” for the people of the diocese following their recent flood disaster.

He sent the message via Cardinal Pietro Parolin, the Vatican’s Secretary of State.

“Having learned of the loss of life and destruction of property caused by the heavy flooding in Lismore, his Holiness Pope Francis assures you of his heartfelt solidarity and closeness in prayer to all those affected by this tragedy,” the message reads.

“He prays especially for the repose of the deceased, the healing of those injured, and for the important work of reconstruction, commending all to the maternal intercession of the Blessed Virgin Mary, His Holiness cordially sends his blessing as a pledge of strength and peace in the Lord.” 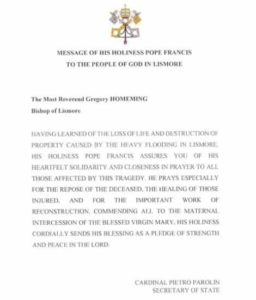 Towns throughout the north-eastern NSW diocese are still cleaning up following the unprecedented natural disaster on 28 February, catastrophic in Lismore itself and extending to others such as Tweed Heads, Ballina, Casino, Woodburn and Grafton.

Meanwhile, an appeal for funds to help those worst affected which was launched by Bishop Homeming is being supported by people and communities across the country and beyond, including Wollongong Bishop Brian Mascord.

Last week Bishop Mascord launched a flood relief appeal to support the people of Lismore diocese as well as his own who are affected by the flooding which spanned much of the country’s east coast.

“As a diocese, I would like to provide practical support for the people of Lismore,” Bishop Mascord said in a statement.

“I also want to provide pastoral and practical support for the people in our own diocese who have been, and will continue to be, impacted by these floods.”

The bishop said that heavy rain and flooding had cut off a number of towns in his diocese, closed schools and made others non-operational or on alert, and affected church buildings and agency offices. “Clergy, staff, families, students and friends from our extended community [are] experiencing another trauma,” he said.

A spokesman for the Diocese of Lismore said it was grateful to be included in Bishop Mascord’s appeal.

To donate in Australia, please transfer funds to the account below:

Or donate via PayPal here.

Donations to the Diocese of Lismore Flood Appeal are NOT tax deductible. For enquiries, email: [email protected]