From footy to Faith

At six foot something, Steve Lawrence is a giant of a man. His height, combined with his sporting abilities were what saw him end up playing AFL football for Hawthorn from 1987 to 1998, including as a member of the brown and gold’s premiership-winning team of 1991.

Part of that AFL experience saw him playing against – and alongside – legends of the game. He’s the sort of bloke thousands of Aussie AFL fans would love to meet, be in the presence of and – these days – have a selfie taken with. Married to wife Annie, the couple have raised six children.

However one thing that sets the former ruckman aside is that he served as Director of the Emmanuel School of Mission in Rome from 2000 to 2003 before being drawn upon by the Archdiocese of Sydney to become Director of Evangelisation and Catechesis for World Youth Day 2008.

For this former sports star faith is his number one priority. These days he runs his own successful speaking and coaching business, Altum Leadership Group. 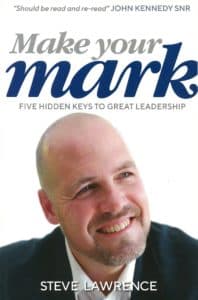 The clue is in the name. Altum is Latin, and means ‘high’ or ‘deep’ or both.

The concept of authenticity or true depth in leadership is what drove him to write a book on what he sees as the five key secrets of real leaders, launched in NSW at the Mustard Seed Bookshop in the heart of Sydney’s CBD last week.

True leadership, he told The Catholic Weekly, comes from winning interior battles and in small, even tiny, daily ways.

An example that clearly resonates deeply with him is Nelson Mandela, the first post-apartheid President of South Africa, whose example is explored in his book Make your Mark – 5 hidden keys to great leadership.

“Nelson Mandela spent 27 years in prison,” he said. “Yet he emerged to be able to unite a nation on the verge of civil war.

“[years before release] he chose to forgive, he chose not to bring about recrimination and retaliation when there was clearly the mood for it among many black Africans.”

“The only reason he was able to do that was that he chose to forgive, and that was an interior victory … that meant that when he was released from prison and became the President of South Africa he could unite the nation, both white and black, because of his interior freedom.

“We all have these interior battles we have to fight. We stumble and fall along the way and we have to win them.”

Failures and success of leadership fall on character

Yet if anyone walks into almost any bookshop in Australia they’ll find hundreds of titles, all claiming to reveal the secrets of true and effective leadership. Asked what makes his book different, there was a long pause.

“One of the key differences is I focus on leadership as character,” he told The Catholic Weekly.

“Other books focus on strategy and technical issues. I believe failures of leadership tend to be failures of character. So the question is: how do we draw people’s attention to this and how do we help people of character be given more responsibility?

“I conclude with an example, that most leadership is ‘tiny’, it happens at the very lowest level or smallest level.

“Everyday leadership, I think, is what people are called to live in the most simple and unexpected moments. It’s about readiness to do what’s right, readiness to step through doors that open, readiness to recognise that our life is not actually for us but for others, readiness to find collaborators who we can help become great.

“It’s in the small things that help us to become better people – that’s what leadership is about.”

You can purchase Make your Mark from The Mustard Seed Bookshop and Cafe, 133 Liverpool St, Sydney or go to www.mustardseed.org.au. The book retails for $19.95.