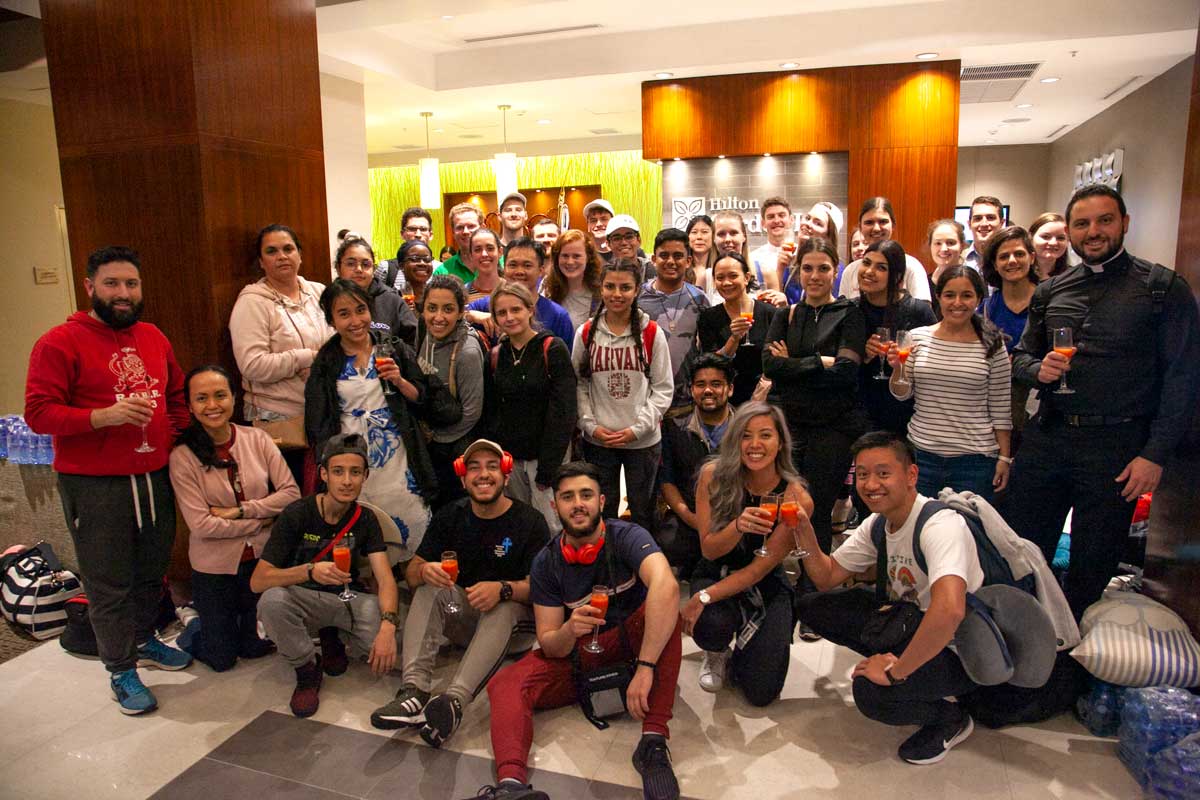 There were no signs of the weariness of the 3.30am wake-up call as the Sydney Catholic Youth pilgrims gathered together with Archbishop Anthony Fisher in prayer at Reagan National Airport, full of anticipation for their flight to Panama.

While the pilgrims enjoyed their visit to Washington, they were also very relieved to leave the below zero temperatures behind and head for sunny Panama to meet with hundreds of thousands of other young Catholics at World Youth Day.

As we boarded our flight, fellow passengers looked just a little bemused to see a group of young people praying and singing hymns with an Archbishop while waiting to board the plane.

The excited buzz that filled the plane throughout takeoff fell quiet soon enough, as pilgrims caught up on some much-needed sleep.

Upon arrival at our transit stop, Houston Airport, the pilgrims headed straight to the small airport chapel for Mass.  Deacon Joseph Murphy preached the homily about St Agnes, who he called ‘a 4th century Roman celebrity.’

“Having been born into a wealthy family and having been blessed with stunning beauty, historians speculate that she had somewhere in the vicinity of one hundred million followers on Instagram.  She was so stunningly attractive that she frequently appeared on the front cover of Vanity Fair, was nagged by Gucci and Louis Vuitton for her modelling services, and was hounded by paparazzi whenever she was trying to relax with family.”

Despite her many suitors, Deacon Murphy told the group, Agnes had secretly chosen to consecrate herself to chastity in service of God and His Church.  One of them, he said, leaked her Christianity to Buzzfeed and the Sydney Morning Herald, leading to her dying a martyr’s death at the hands of a state that persecuted Christians.

The pilgrims too, he said, would also face small persecutions from a society that had again rejected Christianity, and he invited them to imitate St Agnes in her persistence in her vocation to love Christ.

At the end of Mass, Archbishop Fisher commented that it was the first time he had heard Deacon Murphy preach and, not only was he impressed with the homily, but also with the fact that St Agnes had even more social media followers than Bishop Umbers!

After another 5-hour flight, the pilgrims finally landed in Panama.  Stepping out at the airport, it was clear that the city – and the country – was in the grips of World Youth Day.  Pilgrims from all over the world were arriving at the airport, waving flags and singing songs in their native language.  The pilgrims sang on the bus ride back to the hotel. Our bleary eyed start in Washington was long behind us as we all shared in the excitement of finally arriving in Panama.

After a few hours in Texas airport to stretch their legs and grab some lunch, the group was eager to board their flight to Panama and keen to greet others on the flight who were also making their way to World Youth Day.

The group landed in Panama City and made their way to the hotel, arriving for a late dinner and a much-needed sleep.  They will begin tomorrow by attending the Australian gathering, where pilgrims from across Australia will all be together for the first time, and then heading to the Opening Mass.