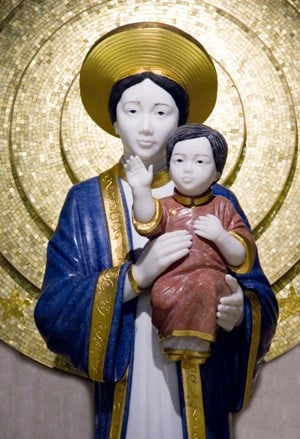 In joining you for the Marian festival of the Vietnamese Catholic Community here at the Our Lady of La Vang Pilgrimage Centre I want to pay tribute to the extraordinary contribution that the Vietnamese community has made to Church and society in Australia. I was just a boy when the boat people started to arrive and little did any of us realise what a gift they would be to our country – what an exchange of gifts would occur. For this Archdiocese the Vietnamese stand out for their sheer numbers of worshippers, for their family piety and for the contribution of their vocations: long may it be so!

Pope Francis’ recent trip to Cuba and the United States made headlines around the world. One journo gushed that the Holy Father was a unifier able to “bring our messy multitude together: singing, dancing, laughing, crying, hoping, praying”. While there he canonised Junípero Serra, an eighteenth century Franciscan friar.

A university theologian enjoying the comforts of the rich young man in our Gospel, he heard Jesus’ call to leave it all behind and follow him (Mk 10:17-30) – in his case all the way to Mexico and California. So he joined the great missionary movement of Franciscan and Dominican friars and Jesuit fathers. In Alta California he founded missions to convert the native Indians to Christianity and protect them from exploitation by the settlers; when the Jesuits were expelled from Baja California he did likewise there.

That’s why to this day California is dotted with place names like Los Angeles, San Francisco, Carmel, Santa Barbara, Santa Clara and San Diego. Junípero’s penitential spirit was legendary: on occasions while preaching at Mass or missions he would beat his chest not just with his fist, but with a stone, a scourge or a lit torch, to the astonishment of the congregation! He baptised and confirmed thousands of natives and worked tirelessly for their welfare, ensuring they were taught not only catechism but skills such as agriculture and crafts that would help to give them some measure of financial security. Because he inspired so many followers he became patron of vocations.

But his canonisation courted some controversy. Some native Americans objected and the Californian Senate voted to remove his statue – though the Catholic governor vowed to veto them. Some regard all the missionaries as collaborators in colonial dispossession and mistreatment of the natives; some see the spread of Christianity as the demise of their cultures and oppressor of their peoples.

Pope Francis took a different view. He described St Junípero as embodying a Church which goes forth to the world not to conquer it by force but rather to present God’s “reconciling tenderness” to all. Junípero clearly valued the native peoples he encountered, learning their languages, translating the Catechism for them, adopting some of their customs, and defending their dignity before the Spanish authorities and their rights against colonists who mistreated them.

Pope Francis clearly believes the Church has something wonderful to offer people of every race, culture or station in life; that despite the flaws of its members Christianity is essentially a missionary faith, one that extends God’s entry into human time and space and joyfully offers to tenderness of God to a humanity desperately in need of such an encounter.

Of course, at the very time Spanish missionaries were taking the faith to the Americas they were also bringing it to Asia; the rise of the Church in California was more or less contemporaneous with that in the Philippines and Vietnam. Once again Dominicans, Franciscans and Jesuits brought the Gospel.

Once again they tried to protect the locals from the voracious greed of the Spaniards. Once again, they integrated much of their Spanish Catholic devotion with what was best in the culture they encountered. But once again there was a clash of powers and interests, resulting in many martyrs – in Vietnam’s case perhaps one hundred thousand of them. All six bishops, most of the priests and many of the lay martyrs canonised so far were Dominicans: Vietnamese people might say that the best Dominican is a dead one!

The missions to the New World – ‘new’ to the Europeans if not new to the Indians and Vietnamese – occasioned many demonstrations of the perennial struggles between those for God and those not, between ideals and greed, between peoples and people, and within them.

That the 18th century ruling elite in Vietnam were not entirely wrong to see burgeoning Christianity as a threat: it did indeed propose a rival worldview and way of life to their own – one that would not allow that any earthly ruler should be worshipped, one that raised up the poor and humble, one that taught universal dignity, liberty and rights such as the Vietnamese people have had to fight for again and again.

Our readings today remind us that the wisdom of God and our knowledge of His ways are more valuable than any earthly wealth, and that greed for earthly treasure can cost us our soul (Wis 7:7-11; Mk 10:17-30). The God whose Word “slips between soul and spirit” is no respecter of personages: He sees our secret thoughts and emotions (Heb 4:12-13). He knows what really matters to us.

To celebrate Our Lady of La Vang is to celebrate a God who does not abandon us in our misery. When mankind had lost its way He sent us His Son to redeem us. When Vietnam was slaughtering its best Christians that Son sent us the Mother he had given us from the cross (cf Jn 19:27). In the same year that the King ordered all churches and seminaries to be destroyed in 1798, she appeared to her Vietnamese children as she has to the downtrodden in many lands, including the American Indians at Guadeloupe. Seeking refuge within the forest of La Vang, these persecuted Christians prepared to laying down not their beliefs but their lives.

Together, they prayed the Rosary. One night, a lady dressed in a long cape, holding a child and flanked by angels, appeared to console them and offer practical advice. She promised that those who prayed there would receive her maternal assistance. And so La Vang became a pilgrimage site amid the persecution: at first a simple chapel but now a grand National Marian Centre.

St John Paul the Great said that Our Lady of La Vang invites Christians need to enrol in her school, the school of Mary, the school of her who is the model Christian par excellence. There the faithful learn deeper conversion and to be more attentive to God’s word, assertive in faith and available to serve the needs of their brothers and sisters.

In other words, if we dedicate ourselves to being good sons and daughters of our Mother – by talking to her regularly, honouring her and letting her reign in our hearts – we will learn to become the instrument of God’s love that Mary is. Mary was docile to God’s will, humbly accepting the task God had given her.

Through her cooperation the God who is love dwelt amongst us (Jn 1:14, 1Jn 4:8). We too are to accept God’s words in our hearts, so making present that love to our families and friends, our schools and workplaces, our adopted country and culture, which all too often forget God’s tenderness and love. Our Lady of La Vang, pray for us!

This is an edited version of Archbishop Fisher’s homily at the Mass in honour of Our Lady of La Vang as part of the Marian Festival of the Vietnamese Catholic Community at Bringelly on 11 October.