The operator of Sydney’s Catholic cemeteries welcomed a backflip by the NSW government on its decision to dismantle and amalgamate it with four underperforming cemetery trusts.

“While we have been very disappointed by this whole situation, we’ll set that aside and look forward to entering these discussions in good faith to come to a sensible conclusion,” said the governor of Catholic Metropolitan Cemeteries Trust’s Danny Casey.

Mr Casey said that Water, Property and Housing Minister Melinda Pavey had not engaged with the trust about the three options presented by a statutory review to resolve a lack of burial space, pricing inconsistencies, inefficiencies and liabilities across Sydney’s cemeteries.

All were issues that were either not applicable to or were being addressed by the Catholic trust, including through its new cemeteries planned at Varroville and Wallacia.

“It just doesn’t make sense to unwind the one trust that is recognised across Australia as the best performing, and the only one in Sydney that has a fully-funded perpetual care fund,” Mr Casey told The Catholic Weekly.

“I think it’s disappointing the minister has cut us out of consultation and has discounted the other two options without explanation.

“There are wonderful people who have served this ministry in many ways and they’ve lived with a period of uncertainty for long enough.

“It’s time to provide the certainty they need so they can continue their great work of respectfully caring for the sacred remains of loved ones and helping support those who are grieving.”

At the time of print, more than 16,000 people had signed a petition asking Premier Gladys Berejiklian to reverse the decision to place the Catholic trust into administration and amalgamate it with the other four trusts into a government one named OneCrown.

Tension within the state cabinet over the issue was reported to have come to a head last Monday, prompting a request for Minister Pavey to work out an alternative solution.

Last weekend new state Labor leader Chris Minns said the government take-over should be cancelled in favour of a “common sense” solution with faith-based and other cemetery operators.

“The government has no right to push religious organisations out of the burial of the dead,” he said.

“I think keeping the Catholic trust in the sector provides contestability in the market place to drive down prices, and to be frank with you the other crown trusts are the ones with the liability problems.

Mr Casey slammed the decision “made without any consultation” with faith groups.

“Any way we look at this decision by the premier it is hostile to religion,” he said.

Reasons behind the decision?

“It only makes sense for two reasons, one is to cover up mess and mismanagement by the government, and the second is because, as is evident in the government’s independent report, there is a plan to privatise cemeteries going forward.

“Privatisation and governmental control of cemeteries means one thing: higher prices for the community.”

Mr Casey explained that of the three options given by the Government’s review “first was this one chosen without any consultation with us, the second was that the church could operate the trusts, the third option was to be left alone to do what we’ve done well for 150 years”.

“We’ve been given no briefing on why the Premier’s chosen to do the first option and discounted the second two.”

“We’ve been given no briefing on why the Premier’s chosen to do the first option and discounted the second two.”

Shortly before the decision to renegotiate with the Catholic Metropolitan Cemeteries’ Trust, recently-bereaved widower Frank Cudmore of Padstow Heights wrote to The Catholic Weekly, expressing his concerns about the future of Rookwood Catholic Cemetery.

“My wife of over fifty years who recently died is being interred [there],” he wrote.

“We paid for a plot that includes the interment, a memorial plaque and most importantly maintenance of the site in perpetuity.

“Now I fear the government will use the trust money for other purposes.” 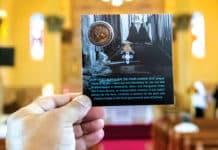