A complete rebuild and expansion of the living quarters for the Swiss Guard will not only improve life for guards and their families, it will also allow for the future possibility of recruiting women.

Currently, applications to serve in the 515-year-old corps are open only to Swiss male citizens who served in the Swiss Army and are Catholic, under 30 years of age and athletic, stand at least 5 feet 8 inches tall and boast an “unblemished reputation”.

But, at least since the new millennium, the overriding obstacle that stood in the way of opening the door to women had been housing, not gender. There is one barracks with most men living in cramped and shared spaces.

“Sixty percent of our corps is under the age of 25; women in the same barracks (as the men) would create big problems,” Col. Elmar Mäder, then-commander of the Swiss Guard, said in 2004, explaining why he would never allow women in the guard at the time.

The succeeding commander, Col. Daniel Anrig, told reporters in 2008 that he would love to allow female recruits, but such a move could be considered only “when the circumstances change,” specifically, the housing situation.

Those circumstances are now set to change in the coming years after a massive rebuilding project breaks ground with a projected completion by 2026 — the 520th anniversary of the founding of the Swiss Guard. It is scheduled to be inaugurated May 6, 2027 — the 500th anniversary of the Sack of Rome, when 147 Swiss Guards lost their lives defending Pope Clement VII.

Jean-Pierre Roth, director of the “Foundation for the Renovation of the Barracks of the Papal Swiss Guard in the Vatican,” told Catholic News Service by email on 13 September that the new project plans for 123 single rooms distributed over four different floors. Today there are only 12 single rooms, he said.

The new layout and design will make things “flexible enough to allow for a separate women’s section adapted to the number of guards-women,” he said, adding that it is up to the Vatican to decide and approve of having female guards. Women have been allowed to serve voluntarily in all military functions in the Swiss army since 2001, while service is mandatory for able-bodied men.

The new project for a modern-day barracks “makes it possible for the Vatican to integrate women in the guard if it decides to do so,” Roth told CNS.

“We have foreseen individual rooms for all guardsmen. But the creation of a women’s section in the Pontifical Guard will be a decision of the Vatican, not of our foundation. So far, nothing has been decided in this respect and, to my knowledge, nothing is in the pipeline,” he added.

The current building is 150 years old and has multiple problems that call for constant and considerable repair. After Pope Francis decided in 2018 to increase the number of guard members from 110 to 135, that put even more pressure on the need for more and roomier housing.

The new barracks, designed by a Switzerland-based architectural firm, will have more modern living quarters with spacious meeting areas. It will meet current building and safety codes and environmental efficiency standards.

The total cost of the project is estimated to be $60 million, including the costs for housing the guard elsewhere while the old barracks are demolished and the new one built. The foundation was created to fundraise those costs from outside donors.

Life, work and love in the Eternal City

Lt. Urs Breitenmoser of the Swiss Guard told CNS that the primary purpose of building a whole new barracks was to provide “safe and modern new buildings with enough space and privacy for the 135 Swiss Guards — single rooms with bathroom — as well as additional apartments for the families who live outside the Vatican walls, as there are no more vacant apartments available in the current barracks.”

The Vatican had relaxed rules regarding marriage for guards, which had been reserved only for the leadership level, from corporal on upward. While candidates may not be married when they join the guard, they are now allowed to marry earlier and start a family.
The new facilities would allow families to live onsite and maintain a close-knit community, according to the foundation’s website.

The Vatican approved the latest preliminary plans for the new building in 2020, and approval also will be needed from the city of Rome and UNESCO, since the Vatican is considered a World Heritage Site.

The Swiss Guard’s main duties are providing security services, protecting the pope and his residence and offering honor guard duty at the main entrances to Vatican City State, at public audiences, Masses and diplomatic receptions.

Pope Francis said, “The life I lead would be inconceivable without the Swiss guardsmen. They are always at my side, day and night.”

“It is all the more important that they can rely on modern and secure accommodations at the Vatican, which becomes a second home for their wives and children, too,” he said on the foundation’s website. 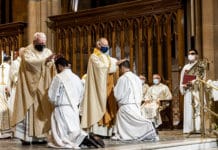 Catholic News Service - December 8, 2021
In the third volume of his prison diaries, Cardinal Pell reveals the insights he gained into suffering Cardinal George Pell, jailed for more than a year...