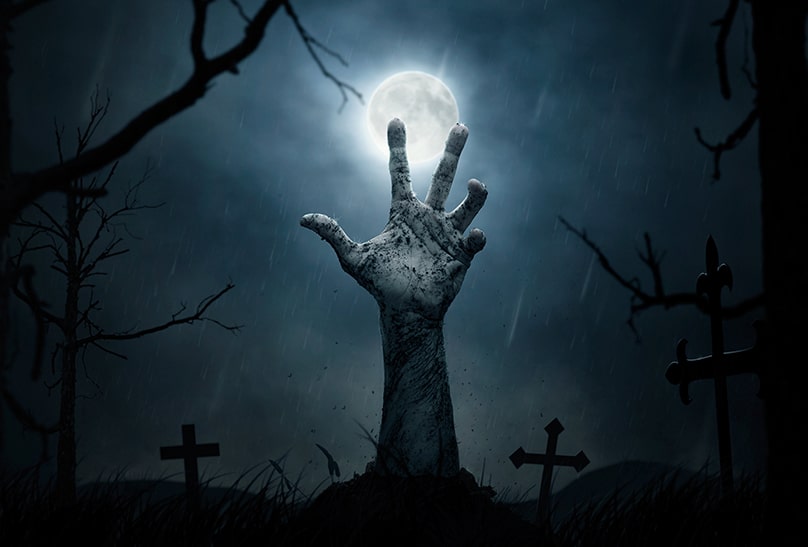 The first time my kids played ‘zombies’, some friends were over and our kids were playing with theirs. It was summertime and there was lots of running around outside after sunset and that hysterical too-much-fun kind of screaming that triggers parental mental notes to check the freezer for icepacks and the first aid basket for bandaids.

Our then-sweet three-year-old came to the dining table where we adults were lingering over our dinner. With arms extended before him, eyes half closed, and obviously trying to contain his giggles, he managed to get out in a monotone, “I’m dead and I’m going to eat your brains.”

What’s with this zombie thing? In recent years there’s been an increase in zombie-related TV series, video games, and movies. World War Z 2, the sequel to a blockbuster zombie movie starring Brad Pitt has been announced for 2017, and this year a movie version of Jane Austin’s classic book was released called Pride and Prejudice and Zombies.

Sydney has hosted an annual zombie walk for the last six years, closing streets for it again last month. If you’ve ever wondered, what is it with these people – adults! – and their gore-drenched fascination with zombies and human bodies, well, so have lots of us.

Dr Matthew Tan, theologian and a former lecturer at Campion College, ponders the question in his recently published book, Redeeming Flesh: The Way of the Cross with Zombie Jesus.

Matthew explains that while the spectre of armies of human flesh-eating undead may not literally threaten our existence, they are not just a silly bit of horror fantasy or comedy either. 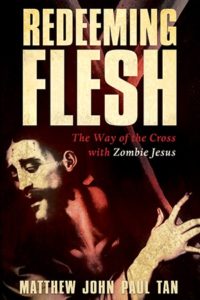 The zombie horror genre, he writes, “is not a bizarre category that sits outside the warp and woof of material culture, but is an integral part of [our] culture. In other words, material culture is indeed monstrous and there lurks in postmodern culture a death of flesh that parallels that of the flesh of the zombie.”

He notes that in movies, cartoons, and video games zombies are often objects of ridicule, but he peels back the surface gloss of the mass-produced horror genre to reveal the real horror of a consumer culture which denies both the reality of true life and death. He argues that ours is a culture that inevitably leads to the undignified spectacle of body-rending zombies as its end-point.

Through a journey of popular consumer products including the American Psycho and 50 Shades of Grey movies and the work of cultural theorists, he paints a chilling picture of a society that in reaching for the ‘body beautiful’ is trying to create an eternity without God.

Deliberately excising God, endlessly gazing upon itself, ours is a society that crushes life out of itself in the quest to secure a commodified and eternal (or at least youthful-appearing) life on earth. He explains, vividly, the ways in which we are already experiencing what St John Paul II termed a ‘culture of death’.

If the book ended there it would be enormously depressing. Thankfully it doesn’t. Matthew then offers the Christian hope in Jesus as the ultimate redeemer of our flesh and blood humanity. In Jesus we have the answer to the very human obsession with death.

Matthew, who is himself a fan of zombie TV series’ such as The Walking Dead and iZombie, points out that while Jesus rose from the dead, and can therefore be thought of (and is ridiculed) as the first ‘zombie’, he’s also the counterpoint to the zombie idea, in offering his own life-giving flesh and blood for the whole human race.

Interwoven in his book are teachings on the human condition and salvation in Jesus, with special focus on the Eucharist through scripture and theology.

Matthew reminds readers that the liturgical day begins at sunset of the previous day. Death, like the darkness, is not the end but the beginning of a new and lovely thing. It ends with a very practical devotional offering – reflections on the Stations of the Cross using the ideas from the zombie discussion.

I appreciate what Matthew is doing here, showing how even in the most perplexing and seemingly contradictory aspects of our secular culture we can find something to grow our own faith and share it with others. He writes that the zombie can be made “not only a part of [our] consumption of popular culture, but also a way towards cultivating a greater appreciation of the saving work of God.”

I would add that St Teresa of Avila taught that the two means to growth in the spiritual life are self-knowledge and prayer. I think this applies as well to communities as to individuals.

It helps us Christians to examine the darker aspects of our wider culture because, much as we may like to think we are quite separate from it, we are, as Christ said ‘in the world.’ To be salt and light for it we need to know at a least a bit about what we’re dealing with.

Redeeming Flesh is a unique look at the ways we live, think, and act today – what we do with our time, even the ways our cities are being constructed and reconstructed – and the redemptive power of God as it’s been pondered by the Church

It’s well-suited to Lenten or Holy Week reading, especially for older teenagers or young adults who like to explore things at a deeper level. Indeed, the book began its life as a Holy Week retreat for seminarians that Matthew gave in 2015 in the Archdiocese of Brisbane.