St Therese Catholic Primary Sadleir-Miller marked its 50th anniversary with the unveiling of a commemorative mural and celebration attended by students, staff, families and past principals of the school.

The day began with a Mass at St Therese’s church, where the school and Samoan choirs sang and the school’s four colour houses were renamed to acknowledge past staff members who were significant to the school’s history.

“People were welcome to go wander through the classrooms and see the changes, and the children performed to songs from the different decades that the school had been opened,” said Mrs McKinnon.

“It was such a wonderful, vibrant, positive day. The children did a fabulous job.

“The response we’ve had from community members has been very positive. It was a very uplifting experience for all involved.”

Artist Kate Ng was commissioned to create the mural. Every child at the school added a piece to the mosaic, as well as parents, staff members, parish priest Fr Paulino Tui Kolio, and members of the parish.

The mural is located at the school’s entry to remind students, staff and visitors of elements of its 50-year history of Catholic education.

It depicts the school’s founding order, the Sisters of the Sacred Heart, and the school’s prayer life and parish links.

“A rainbow and sunshine signify a hope-filled place of learning,” Mrs McKinnon said. “There are also a lot of symbols for the future – technology, literacy and numeracy symbols and symbols of the creative arts.”

Families have also purchased bricks to engrave with their names, years they were students of the school and a brief message as part of the 50th anniversary celebrations. 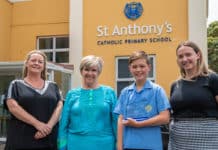