Ten years ago, the last thing Michael Neylan could have imagined was becoming a religion teacher – let alone heading a pilgrimage of more than 200 students and teachers to World Youth Day 2019.

But that’s exactly what he’s doing and he can’t wait to share the “life changing event and transform the lives of hundreds of young people”.

The dedicated young teacher is coordinating the pilgrims from Sydney Catholic Schools heading to Panama for the “unforgettable” event.

He said he is very excited to give young people the opportunity to see the Church come alive and be overcome with the Holy Spirit as he did in Sydney 10 years ago.

“I was at a stage in my life when my faith was something I had put on hold, to be picked up when I was much older,” he said.

“And then along came WYD08 and my life changed forever.

“I couldn’t help but get swept up in the sheer joy of the Catholic faith being so publicly displayed across the entire city.

“It was just incredible and I knew at that point I had to be part of it.

“I was at uni studying teaching and unsure what area I would get into and this very quickly helped make up my mind.

“I decided then and there that teaching religion would definitely factor in my career.”

On graduating university, Michael took up a position teaching geography and religion at Casmir College at Marrickville, then Marist Eastwood before landing his current role as youth ministry coordinator for Sydney Catholic Schools.

Michael admits it’s a dream job allowing him to not only live his faith everyday but share it with other young people.

He said WYD in Panama will be the highlight of his career giving young people the opportunity to see the Catholic faith celebrated on such a grand scale.

And while he admits the financial and geographical challenges have been difficult, he said the contingent heading to Panama – led by Archbishop of Sydney, Anthony Fisher OP – will be an experience they will never forget.

“I am so fortunate to be able to live out and share my faith openly with young people not only at work but everywhere I go,” he said.

“I have WYD08 to thank for that and I know those heading to Panama will experience the same thing.

“Today my faith nourishes everything I do, I look at life more broadly while encompassing the love of God.

“My faith completely changed 10 years ago and I met people then that are now lifelong friends.

“Others I intend to reconnect with at the WYD08 10-year anniversary celebrations to be held in Sydney next month which I encourage everyone to attend.”

The World Youth Day Sydney – 10 Years On event is open to everyone and will celebrate a time when over 500,000 pilgrims from around the world descended on Sydney along with Pope Benedict XVI in the largest demonstration of faith Australia has ever seen.

The event is being held on July 20 and features a Mass at St Mary’s Cathedral at 5.30pm celebrated by Archbishop Fisher followed by various performances, testimonies and an announcement of new initiatives to launch a vision for youth ministry in the future. 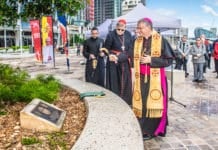