Fathers and grandfathers from across Sydney are helping to nurture the Catholic faith of younger generations through a monthly Rosary Crusade on Saturdays at St Mary’s Cathedral Forecourt, inspired by a world-wide movement.

The Mens Rosary Crusade, held on the first Saturday of each month, has been inspired by the Five First Saturdays Devotion associated with the apparitions of Our Lady of Fatima in Portugal in 1925.

When Our Lady appeared to five young children at Fatima, she urged the children to tell anyone that she would help at the hour of death all those who on the first Saturday of five consecutive months, go to Confession, receive Holy Communion, pray the Rosary and meditate on the mysteries of the Rosary.

The Sydney group began their Rosary prayers in January with 30 men and young boys in the cathedral forecourt and this has grown dramatically each month since then with 140 joining in the most recent prayers on Saturday 4 April.

Taking inspiration from Our Lady, each devotion begins with confession being made available from 11:30am, Mass being celebrated at Noon and then the Rosary Crusade at 1pm. 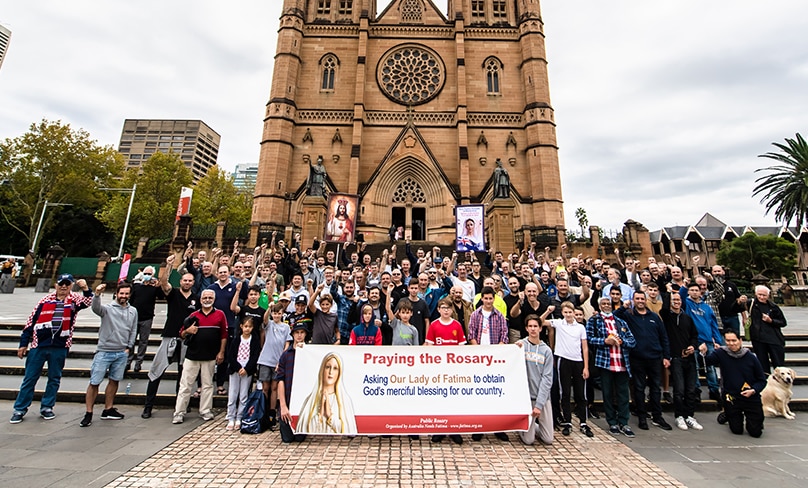 One of the participants, Life, Marriage and Family Officer from the Archdiocese of Sydney, Ivica Kovac, said it has been very pleasing to see generations of men embrace this faith initiative.

“The images we’ve shared from Sydney are in turn inspiring men in other parts of the world to unite in prayer in the same way. This includes 21 cities and towns in Poland where men have gathered in heavy snow to pray the Rosary, 13 cities and towns in Ireland and everywhere from Texas in the U-S through to Peru and Slovakia”, he said.

“In Sydney, we’re also integrating into the devotion, three minutes of personal meditation during each of the five decades of the Rosary, which enhances the experience for everyone concerned”. 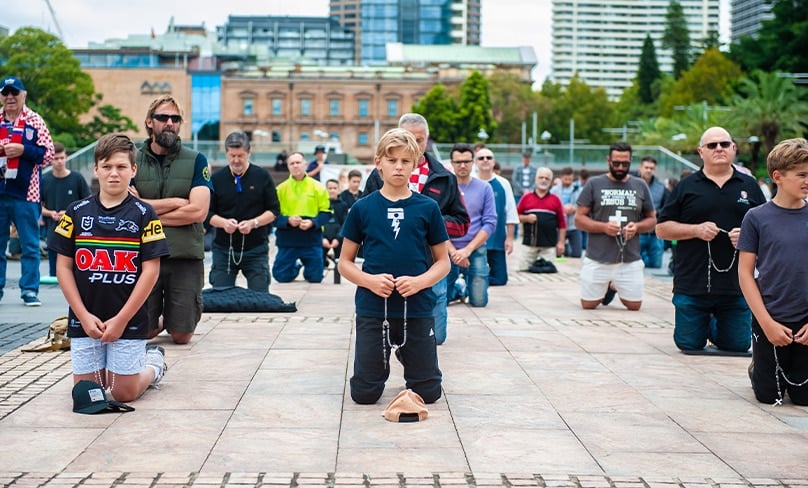 “I feel much happier and more contented praying in a group than I ever do praying on my own”, he explained.

“It inspired me when I see people on their knees and strong numbers of faithful united in prayer in this way, especially at the moment when our friends in Ukraine are in such desperate need of our prayers”.

St Bernadette’s Dundas parishioner Steve Furjanic has been coming along to the Rosary Crusade each month with his three sons aged 11, 16 and 19.

“As a dad, it’s important for me to ensure my kids have the faith ingrained in them as well and to never be shy about professing their faith in public in this way”, he said.