Americans who self-identify as “Faithful Conservative Catholics” have united around the dogma that “Wokeness” (meaning a renewed conviction that racism is evil and must be resisted) is contemptible and laughable—and I can’t understand why.

Scripture, after all, is chockablock with calls to awaken.  The Psalms cry, “Awake, my soul!” Joel calls his spiritually inert people to repentance, saying “Awake, you drunkard, and weep!” Peter and company battled sleep to witness the Transfiguration.  Jesus scolded those same companions in Gethsemane for failing to remain awake for one hour as he entered into the great struggle that would win our salvation.  Jesus spoke of raising Lazarus from sleep. And Paul, quoting an early hymn which linked repentance and baptism with waking from sleep, cries, “Awake, O sleeper, and arise from the dead,/and Christ shall give you light.”

“Yeah,” says the critic of Wokeness.  “We get that Scripture uses the image of awakening.  But it’s referring to a spiritual awakening to Jesus, not to racism.”

Are you sure about that?  Racism is sin and we are to repent it.  The very first controversy in the early Church was precisely about whether the Church was to be organised around ethnicity or discipleship to Jesus.  Jewish Christians made the case that Gentiles needed to become Jewish before they could be a Christian.  The Church, led by the Spirit, decisively rejected that at the Jerusalem Synod (Acts 15).  Ever since, she has insisted that, “Here there cannot be Greek and Jew, circumcised and uncircumcised, barbarian, Scythian, slave, free man, but Christ is all, and in all” (Colossians 3:10-11).  And Nostra Aetate underscores this, saying, “The Church reproves, as foreign to the mind of Christ, any discrimination against men or harassment of them because of their race, colour, condition of life, or religion.”

“But we are already doing all that!  Why do we have to listen to all the guilt-mongering?” say Faithful Conservative Catholics.

Again, are we? I have been an American history buff all my life.  It was not until just a couple of years ago that I learned that in 1921, there was a gigantic race massacre in Tulsa, OK that wiped out what had been known as “Black Wall Street”. Most (white) Americans just learned about it because it was dramatised in a TV show here recently.

Same with police violence like the murder of George Floyd.  As Will Smith observed, it’s not happening more, it’s getting filmed more.  Realising sin like that and insisting it must be addressed and not swept under the rug is all “wokeness” means.  It is the duty of any disciple who believes Jesus takes the side of the underdog, the least of these, and the oppressed.

“But what good is such guilt-mongering?” goes the complaint. “Why do we who were born years after the crime have to have our noses rubbed in it?”

Suppose you and friend are listening to an old woman tell you the story of the murder of her father, how it traumatised her as a child, wrecked her family fortunes, drove her mother mad, and set her on a life-long course of trials and struggles resulting in her brother’s alcoholism, her children’s malnutrition, and her long labours at two jobs to make ends meet. As she finishes her tale and you are searching for some kind word to empathise and console her, your companion blurts out, “Don’t blame me!  I didn’t do it!  Man, I hate it when people like you try to guilt me out with stuff like this.  You know, in a lot of ways I feel like I’m the real victim here!”

Would you call such a response “Normal” or “deeply narcissistic”?

And that’s the thing: If our first response to an outrageous crime like Tulsa is “They are making me feel guilty!” we have to face the fact that, as Catholics, we are still not thinking about the victims, nor about the generational echoes that ring down to our own time, not only of this crime, but of centuries of slavery, a hundred years of Jim Crow and economic structures that still keep blacks from accruing generational wealth and property at the same levels whites do.  We are thinking about our own feelings first.

Realising that is what Wokeness means—and has meant since the Psalmist compared the revelation of God to the desert sun that searches out every nook and cranny of the soul and prayed, “Clear me of my hidden faults”. (Psalm 19:12).

There is nothing to fear from waking from sin to the light of God and putting our neighbour before ourselves. Of which more next time. 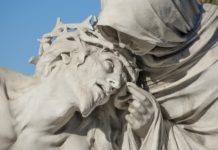 Mark Shea: Models of the Church – Mary and the Church of Discipleship

Mark Shea: Models of the Church – Mary and the Church...