In all the length and breadth of Scripture there is no command to obey the law of gravity.  Nor are there any commands to let our hearts beat or to digest our food.  Some of God’s laws are impossible to disobey.

But God has also ordained that some of his laws are capable of being disobeyed.  It’s a choice he wove into the fabric of Creation from the very start and it is what Genesis 3 describes in the story of the fruit of the tree of good and evil.  We have, under God, the power to sin and sin gravely or to choose to obey him.

This elementary fact is particularly present to us as we face the election result here in the US and the fears engendered by the dreadful choice of candidates.  It’s one thing to choose between good and evil.  It’s another thing to have to choose between one poison and another.

It is easy for us to imagine that the dilemmas we face are unlike any others have faced.  And imagining this, it is easy to start feeling that the wheels are coming off, that the problems and fears we face now are unlike those any other generation have faced.  But this is not so and it is important to remember that.

When we compare our time to other ages in our history or our country to other places in our world, it is vital to remember how much God has blessed us and how many gifts and resources remain to us as Americans and to us Catholics as the Church of Jesus Christ.

That is why our duty, whatever the outcome of the election, will remain what it has always been: to give thanks to God in all things.  This goes for Aussies too, of course, since America, for well or ill, is bound up with the fate of Australia.  If you don’t believe me, just read the novel or watch the film On the Beach, in which a trick of the wind preserves your blessed land from the nuclear fallout that has killed the rest of the human race after we Americans blow up the world. Every American election, but this one above all, is played for stakes that involve the rest of the human race.

Humans have traditionally dealt with huge uncertainties in one of two ways: trusting God or trusting that which is not God: luck, the Fates, the gods, etc.  This election, like every other Big Uncertainty, will prompt many a grown man to go outside, turn around three times, curse, spit and do everything to appease the Wrath of the Whatever from High Atop the Thing:

And it’s quite possible that things will not go as the experts say.  Rome can be within inches of defeat and come back to smash Carthage and sow salt on its ashes.  A tiny force of English can smash the French at Agincourt and a tiny French teenager named Joan of Arc can humiliate the English.  Outnumbered and outgunned Washington can defeat Cornwallis.  Hitler can smash France in a matter of weeks when nobody imagined it.  The 1969 Mets can win.  Truman can defeat Dewey.  Americans hockey players can cream Russians at Lake Placid in 1980. Reversals of fortune both good and bad are real parts of history.  And yet our faith says that not a sparrow falls without our Heavenly Father’s knowledge and providential care.

So “we do well always and everywhere to give you thanks and praise” is the language of the liturgy and it remains true at this hour, whatever the transitory and brief circumstances of this life happen to be. Jesus faced a far more fearful thing than an election not going his way on the night he was betrayed.  And yet, he took bread, broke it, and gave our Father thanks and praise.

And he meant it.  It was the orientation of his whole heart, mind, soul, and strength to do so.  Because he understood that the law of thanksgiving was given to man, not because he was bound to obey it like we obey the law of gravity, or as a dumb animal obeys his instincts, but as free human beings made in the image and likeness of God obey the law of God: because it is our glory and dignity to do so–especially when it is hard.

We are, like it or not, in a time of testing and we are called by God to rise to the occasion: to imitate Jesus in our trials as well as our glad times.  Many of us, like Frodo, wish that such times had not come upon us but, as Gandalf says, that is not for us to decide.  What we must decide is what to do with the time that is given to us.

One of the first things to do is to thank God for that gift of time.  Whatever has happened at the polling booths, the fact will still remain that God is God and history has not gotten away from him.  He has known the outcome from the foundation of the world and this time too is part of his plan.  He has not forsaken us, however often we–all of us–have forsaken him.  And the days we are given–each one–remain times we can offer to him in gratitude for life and breath and love and grace.

Then the thing to do is listen to what St. Paul says:

Put to death therefore what is earthly in you: immorality, impurity, passion, evil desire, and covetousness, which is idolatry. On account of these the wrath of God is coming. In these you once walked, when you lived in them. But now put them all away: anger, wrath, malice, slander, and foul talk from your mouth. Do not lie to one another, seeing that you have put off the old man with his practices and have put on the new man, who is being renewed in knowledge after the image of his creator. Here there cannot be Greek and Jew, circumcised and uncircumcised, barbarian, Scythian, slave, free man, but Christ is all, and in all.

Put on then, as God’s chosen ones, holy and beloved, compassion, kindness, lowliness, meekness, and patience, forbearing one another and, if one has a complaint against another, forgiving each other; as the Lord has forgiven you, so you also must forgive. And over all these put on love, which binds everything together in perfect harmony. And let the peace of Christ rule in your hearts, to which indeed you were called in the one body. And be thankful. Let the word of Christ dwell in you richly, as you teach and admonish one another in all wisdom, and as you sing psalms and hymns and spiritual songs with thankfulness in your hearts to God. And whatever you do, in word or deed, do everything in the name of the Lord Jesus, giving thanks to God the Father through him. (Col 3:1–17).

I will be voting third party this 8 November.  There is not the slightest chance my guy will win.  But whoever does win, I will do the Christian thing and imitate the great Catholic convert John Wayne.  In 1960, when John F. Kennedy won the presidency, Wayne responded with both patriotism and magnanimity saying, “I didn’t vote for him, but he’s my President and I hope he does a good job.”  Whoever wins,  I will say the same, and then support them when they do what is right and oppose them when they do evil, trusting the God I must obey, rather than human beings.  He remains God and “in everything…works for good with those who love him, who are called according to his purpose” (Rom 8:28). 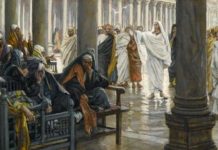