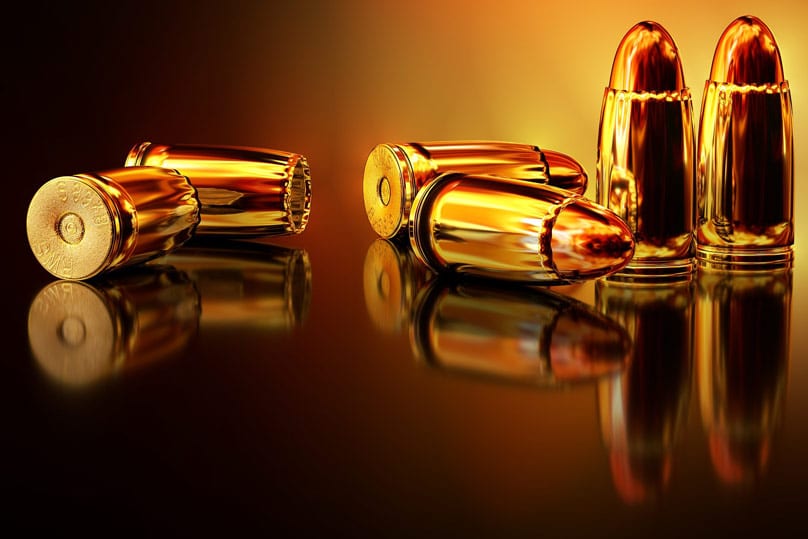 One common theme heard, especially in the gun-besotted United States, is the old saw, “Guns don’t kill people.  People kill people.”  Prescinding from the obvious reply–which the enlightened country of Australia was able to figure out without much trouble twenty years ago– “It’s really hard to shoot five hundred people—or even one–if you don’t have a gun” I want to focus elsewhere and interrogate a bit of philosophy that lies behind that mantra.

The idea is that technology is a just a thing sitting there.  We do things to and with technology, but it is not doing anything to us.

I think that, the moment you actually say that out loud, the absurdity of this claim is manifest.  Technology exerts enormous pressure on us and changes us in thousands of ways.  And when the Gun Cult in the US is not repeating its mantras to defend their guns, even they constantly acknowledge this.

So, for instance, zealous Gun Cult advocate Roseanne Barr–the actress who blew up her career recently by tweeting racist slurs–blamed her actions, in part, on the technology called “Ambien” she was taking.  Her argument boils down to the claim that part of the story behind her behavior is that the drugs she takes (she suffered from a traumatic brain injury when she was young) influenced her.  Of course, this does not relieve her of responsibility.  But does anybody doubt for a moment that drugs do, in fact, change how we behave? 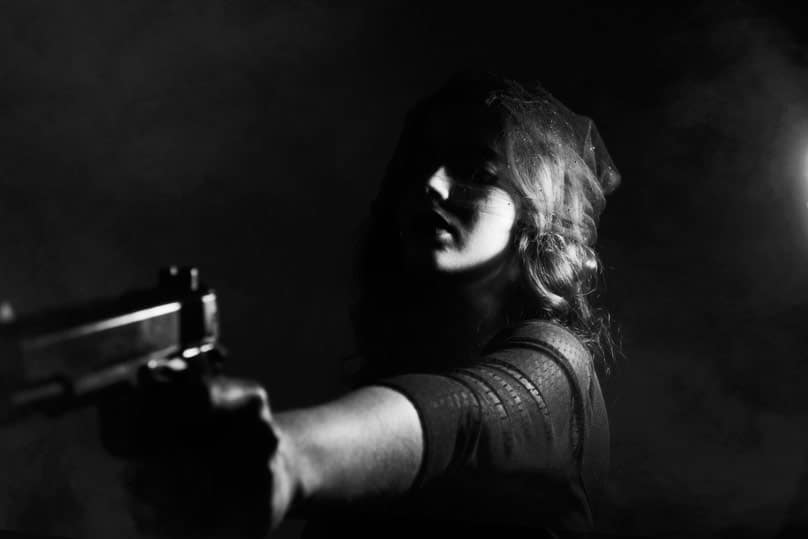 Now the thing is, the Gun Cult is not entirely wrong here when they start pointing the finger at these technologies.  Who in their right mind, for instance, thinks a video game called Active Shooter, in which the player roams the halls of a school gunning down classmates and cops, is “morally neutral” and should be handed to their kid?

Who in their right mind believes that a piece of technology called “a pub” is morally neutral when a visit to it is pressed upon a recovering alcoholic?

Who in their right mind believes that the technology called “internet porn”—especially violent and sadistic porn–is morally neutral and does not exert immense pressure on people with sex and violence addictions? 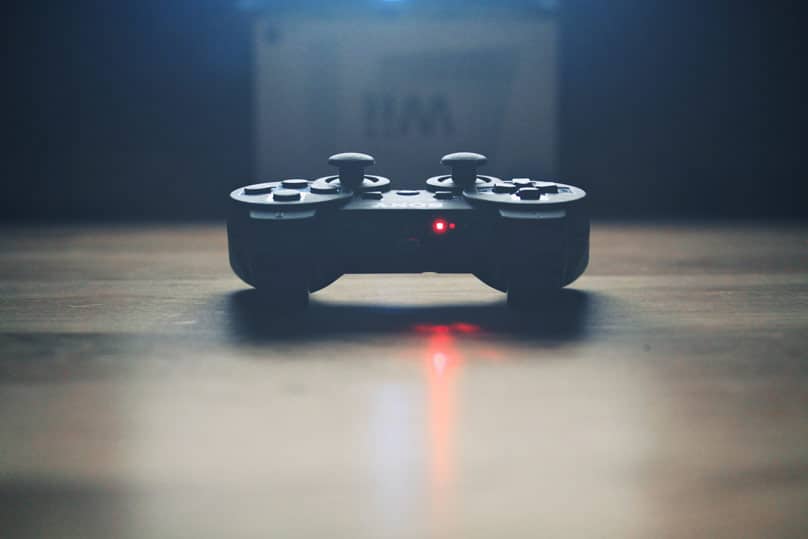 And so, back to weaponry.  A common trope in our American Gun Cult is that “Cain killed Abel with a rock. It’s a heart problem, not a gun problem.”

Who in their right mind thinks that handing nuclear weaponry to a Kim Jong Un or ISIS and then praying for God to change their hearts is a good idea?  Who among us is unaware of the fact that such technology inevitably carries with it an invitation and an intrinsic pressure to use such technology that tempts and seduces human actors?

Yes, of course, human beings make moral choices.  But one of the choices they make is to create technology.  And when they do that, the technology bears the stamp of the humans who make it and becomes a form of language.  We get this with technology that is specifically ordered toward communication.  Technology, like, say, a book is a human artifact and bears the imprint of human will. It says and does things to other humans –or more precisely we speak through such technology–and so that technology carries with it a power to influence and pressure, seduce, tempt, and even (sometimes) ennoble other human beings. Sometimes that is really blatant as with porn. Other times the moral pressure is not as obvious. 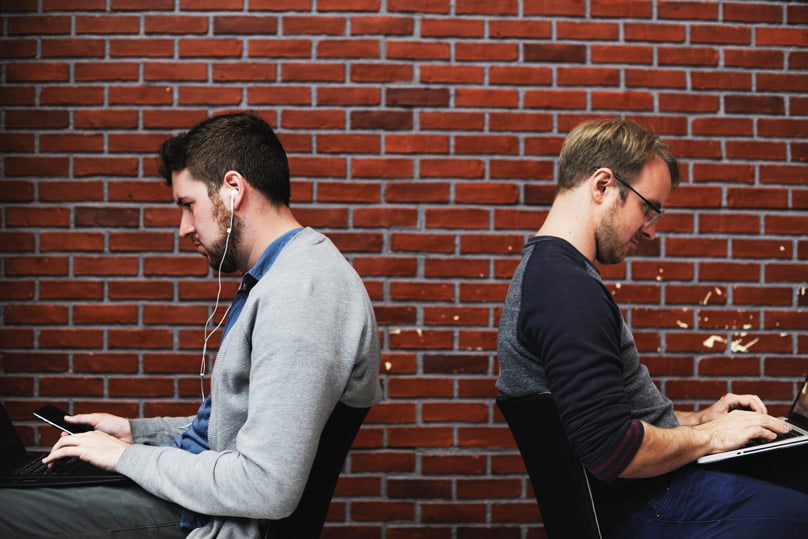 So if you send your kid to a neighbor’s house and your neighbor rolls a joint and wordlessly offers it to your kid, that joint is a small piece of human technology.  It was made by a human being.  But it was made for a purpose and when it is offered to another human being, something is being spoken through the technology just as surely as if the technology were a book, a TV, or a telephone.

Obviously technology is not itself a moral agent. But that does not exhaust the conversation. Technology is the expression of moral agents to other moral agents and exerts pressure on moral agents to do things that were hitherto impossible and even unimaginable. Putting a nuclear weapon in the hands of ISIS, for instance, opens to them moral vistas hitherto beyond their reach. Likewise, drugs can literally make people capable of moral choices they would never be capable of making without that technology.

Consider, for instance, the language spoken through a dumpy little Ford Anglia and contrast it with the language (and the pressure put upon us) through a bright red, turbo-charged Maserati with a hot, blonde model sitting in the front seat.  Who in their right mind thinks those two pieces of technology are not sending two sharply different messages.  The first speaks to us of a quiet, lower-class sensible suburban life in Little Whinging, Surrey.  The latter says—loudly—“Why aren’t you living a life of sex, power, and wild parties, you loser? I can help give you that!  Break out of your humdrum life!”  Why?  Because these pieces of technology, made by humans, communicate to us a message the human makers want you to receive. 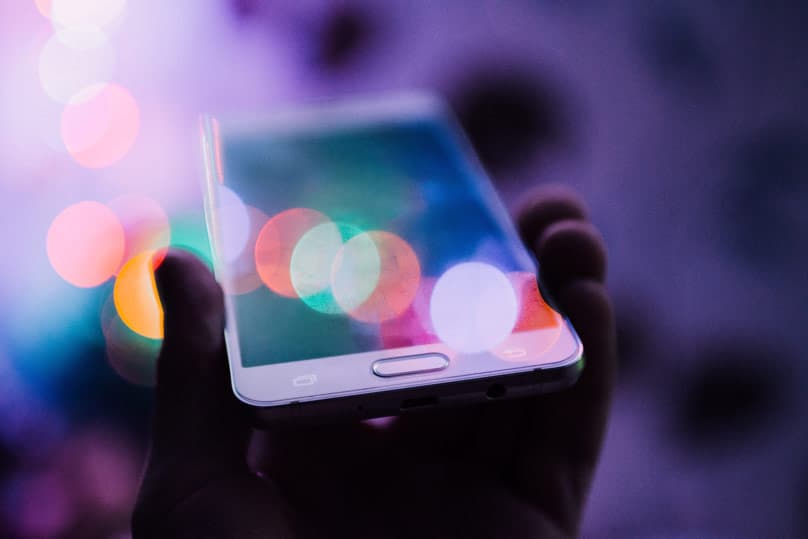 Or take clothing.  It’s just material.  But who in their right mind believes for one second that their 12 year old daughter going to school in a nice flower print dress is just as morally neutral as her wearing a thong.  Who thinks their son wearing the piece of technology called a “suit” vs. a piece of technology called a Nazi uniform are just using morally neutral technology.  And who in their right mind thinks that letting them do so habitually will not result in profound changes to them?

In a similar way, cell phones train us to think and act in specific ways.  So too television and couch technology have altered the physical appearance and health of whole populations by their mere presence. Their effects on such populations are statistically predictable.  Again, this is not to deny free will.  But it is to deny the claim that technology is morally neutral.  Technology creates and suggests possibilities that simply did not exist before, because it is an expression of human creative will. Another human, handing you a guitar or a nuke or a hit of meth is saying to you “Explore this. See what you can do with this” in ways that may literally have never occurred to us without the encounter with the technology.

And so with guns.  Yes, the problem is ultimately in the heart.  But guns exert, on some hearts, as intense a pressure as an open bottle of whiskey or a hit of cocaine to an addict.  And gun manufacturers know this and exploit it: 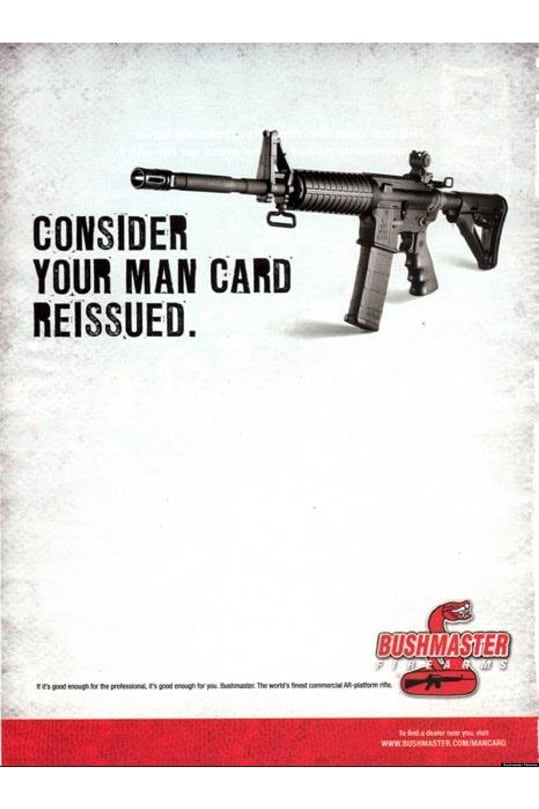 Guns say something to us about manhood and violence and power and awesomeness and destruction and protection and safety and vengeance and heroism and vigilantism (among many other things).  As the ad makes clear, the pressure is intensely focused on masculine insecurity.  The gun doesn’t merely say, but scream, that without it, you are no kind of man.  And to deeply disturbed, angry, and insecure men and boys, that is a million miles from “morally neutral”.  Not for nothing is the assault weapon their drug of choice massacre after massacre.

The odd thing, to me, is that Catholics in America could so easily and schizophrenically embrace the whole “technology is morally neutral” bunkum.  After all, we hold that matter can have a spiritual and sacramental quality to it.  Holy water is more than merely “neutral” H2O. Sacraments and sacramentals (and in other ways, all of creation) can be imbued by God with something that communicates his grace to us.  Relatedly, our tradition has room in it for the possibility that material things can be used by the malignant creatures called fallen angels.  So we do not, for example, play around with Ouija Boards or allow invocations of the devil from the Satanic Bible.  We ask priests for exorcisms and blessings of things and places, not just of people. 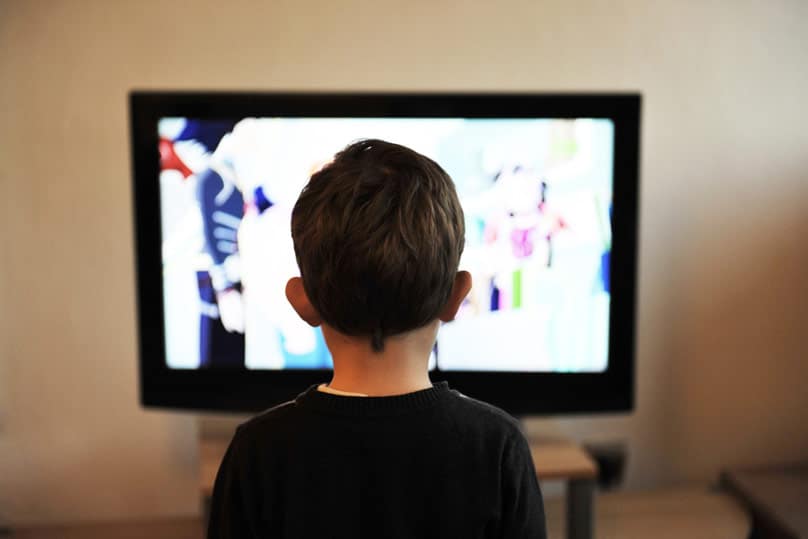 All I am saying here is that the same principle applies to things designed and fashioned by the mind and will of human beings.  When a human being makes something, the thing made embodies his or her will and it says something to us because they are saying something.  It speaks an invitation to use it and it speaks many other things besides, depending on the kind of technology it is.  Somebody designing a pair of overalls is saying something very different from somebody designing that hot little bright red silk nighty.  The one designing a gun or a bomb or a poison gas grenade is likewise inevitably inviting us to use them and communicating to us the moral permission to do so.  Yes, we retain the choice about how and whether we will use the technology.  But it is a choice that is always, to some extent, pushing back against the offer made us—the pressure put upon us—by the mere existence of the technology.  Its maker says to us, by the very act of making it, “Why would I make this if not to be used?”  And when the gun is a handgun or a weapon of war—technology whose primary purpose is to shoot and kill human beings—the pressure and the loud invitation to angry and violent people is to go ahead and use them for the very thing they were designed to do. 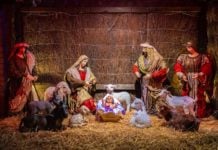