I have criticised Fr. James Martin, SJ in this space, so it is only fair that I praise him as well when he does good.  Last week, he published two tweets that sum up very nicely the insane dichotomy of the politics of my country—and the Church’s entirely sane reply to them: 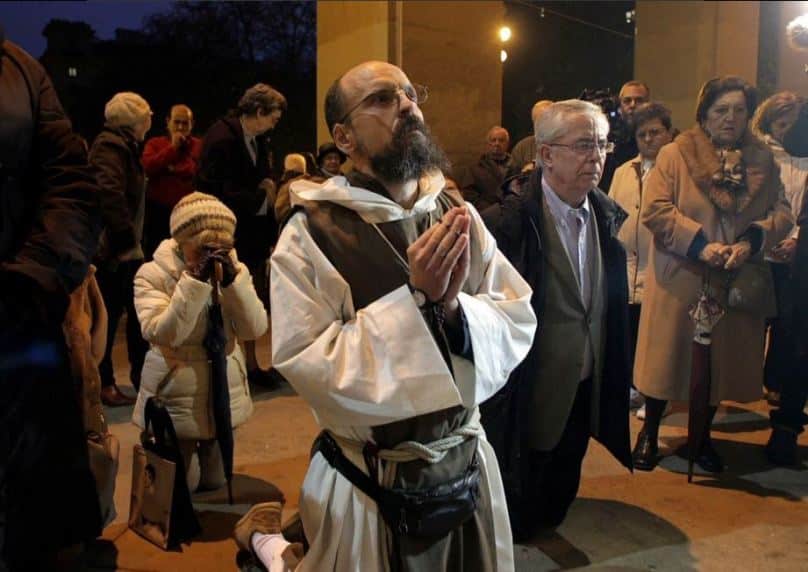 The tweets tell a story that I have seen played out a thousand times in the American Church—and tell us that there is still a sane Church pointing the way out of our entirely unnecessary contradictions.

I was once asked to give a talk on the Church’s social doctrine at a local parish.  There, on one side of the room, sat the Social Justice people, eager to hear about the stuff in the Church’s teaching concerning the Preferential Option for the Poor, the Church’s rejection of racism, her support for a living wage, opposition to the death penalty, her hostility to war and openness to pacifism, her call for universal health care, etc.

There, on the opposite side of the room, were the Pro-life people, eager to hear about the Church’s teaching on abortion and euthanasia.

Each faction (for that is what they were) eyed each other with hostility and suspicion. Neither dreamed for one second that the other was an ally. Both saw each other, in fact, as enemies to be defeated and overcome.  It was a miniature portrait of our foolish divisions.

My talk focused on the four pillars of Catholic social teaching: 1) the Dignity of the Human Person; 2) the Common Good; 3) Subsidiarity; and Solidarity.

Here’s the deal: It is wrong to pit any of the pillars against each other. Catholic Social Doctrine does not operate on a system of checks and balances as if it were the US Constitution. The Four Pillars are harmonious, not in competition with each other, just as Fr Martin’s tweets are harmonious and not in conflict.

The Church teaches a consistent life ethic.  She does not say that killing unborn is the equal of denying a worker a just wage. Rather, it says that killing the unborn is related to denying the worker a just wage.  And guess what?  That was not invented at Vatican II. That’s why both the taking of innocent human life and the denial of wages to the worker are known as two of the four sins that cry to heaven for vengeance, right there in the good old Douay Catechism of 1649.

Why?  Because the life of the unborn is not the opposite of all the other lives protected by Catholic teaching.  It is, again, related to those lives, since people who cannot afford to live cannot afford to have children and are intensely pressured to kill those children rather than let them be born if we deny them a living wage and the economic means to rear a family.

The trick was accomplished by teaching the Pro-life Faction that everything beyond abortion and euthanasia was a “prudential judgment” and that this meant “feel free to blow off the Church’s teaching if you don’t like it.” (Thirty years ago, the left wing political machine achieved the same effect by telling its acolytes that “primacy of conscience” likewise excused the disciple from obedience to all Church teaching he or she found disagreeable.)

The paradox is that “focusing on life issues” resulted in precisely the opposite of what was intended. Because in doing so, the Pro-life Faction embraced the fatal idea that the rest of the Church’s social doctrines was, by turns, a distraction and, eventually, an obstacle to be cleared out of the way.

This perception only increased under the influence of Party Spirit. Instead of focusing on abortion and euthanasia, increasing time and energy over the past twenty years went to explaining why we could ignore three popes and all the world’s bishops on matters as diverse as just war teaching, torture, capital punishment, racist support for Nazis as “very fine people”, the plight of the refugee, a living wage, health care, defense of a self-confessed sex predator and (most recently) the brutal, vindictive, and spiteful policy of ripping children from the arms of the parents and putting them in what amount to prison facilities for months on end or, worse, handing them over to foster homes “or whatever” who turn out to be human traffickers.

The thinking is very simple—simplistic even: we must defend the allegedly “pro-life” party on all these other features of their agenda because Someday Real Soon in the Great By and By, that party will magic abortion away and it will all be worth it. And so countless members of the Pro-life Faction end up not merely defending, but celebrating the cruelty of tearing children from their mothers arms, to name just one moral absurdity.

This is why we cannot isolate the Dignity of the Human Person from the other pillars and why Fr Martin’s observations are simply What the Church Teaches and not some sort of paradox or contradiction. The Common Good is simply the reality that the Dignity of the Human Person applies to all and not just to a special class of human. Just as white children have a right not to be ripped from their mother’s arms, so brown ones do too.

If one is concerned about abortion, one has the obligation to be concerned about the jump in fetal mortality in Flint due to lead in the water. Our common humanity demands attention to the Common Good.

In the same way, the Church teaches Solidarity, the simple biblical truth that we are all made in the image and likeness of God and are therefore all connected. And baptism only enhances that connection, making us profoundly responsible for one another as members of one Body in Christ.

That brown kid ripped from his mother’s arms at the border is my responsibility as a baptised member of the Body of Christ since we are, as Paul says, “members of one another”, just as much as the white kid ripped from her mother’s womb is.  We cannot say to another, “Your end of the Titanic is sinking.  Too bad for you.”

And finally, Subsidiarity means that I have a responsibility to do what I can with my gifts and graces God has given me to get personally involved in helping both the unborn and the kid at the border.

For Subsidiarity means not, “Taxes are theft and the state can go to hell because I get to keep all my hard-earned money” (as it has been distorted to mean by Libertarianism), but “God desires us to get up close and personal in our cooperation with Christ to help the least of these.”

The tragedy of pitting the four pillars of Catholic Social Doctrine against each other like a system of checks and balances instead of the harmonious whole they are can be seen in the responses to Fr Martin’s tweets.

Judging from the retweets and likes, the Social Justice Faction loves to hear the Pro-life Faction put in its place for its hypocrisy in using the unborn as human shields for war on the rest of the Church’s teaching. And, to be sure, there is copious hypocrisy to jeer at.

Here, for instance, is an all-too-typical transcript of a conversation between a friend (who advocates a Seamless Garment Consistent Life Ethic) and a standard issue conservative pro-life American Christian:

Them: “Well, now, I see where you’re coming from but there *is* a difference, let me explain…”

Them: *involuntarily* “ALL LIVES MATTER!”

All lives do matter.  The trick is getting people to break out of the political tribes and into the larger world of the Church’s vision.  The fight against abortion is related to, not the opposite of, all the rest of what the Church teaches. We must be more pro-life, not less. And we must abandon the Protestant either/or and recover the Catholic both/and which urges us to protect human life from conception to natural death.