Anthony Yousif, college captain at Patrician Brothers, Fairfield, knows it’s rare to get a chance to compare notes with student leaders from other schools.

He was grateful then to meet up with peers who are also seasoned leaders more than ready to meet the challenges of adult life – including tackling the big questions of the search for meaning and the role of the Church in their lives and the world.

The meeting, over lunch with the Archbishop of Sydney, Most Rev Anthony Fisher OP at his home this week, was a “very insightful experience” he said.

“Not only did we get to meet like-minded young people but it is also good to get your own viewpoints challenged.

“Some of the big questions were asked of the archbishop and for me it was a big learning curve. Now we know how to defend our faith better and learn more about what the Catholic Church is doing to counteract modern problems.” 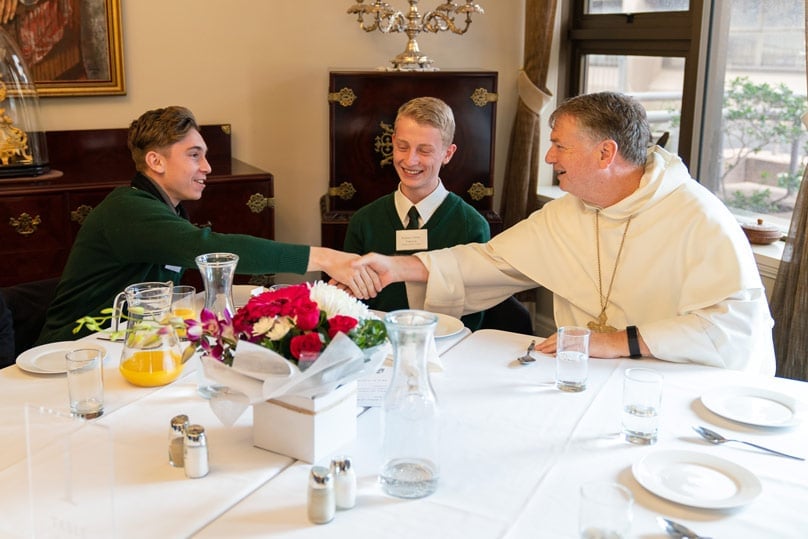 The archbishop welcomed the students from Sydney Catholic Schools to his house for a no-holds-barred discussion on a variety of subjects including doubts in faith, the screening of future priests, and how the Church can better support young people and families.

Over chicken burgers and steaming bowls of pasta, the archbishop told the 32 senior students from 16 schools in the archdiocese’s southern region not to worry if they or their Catholic friends had doubts about whether the faith was really true.

“To young people that are wondering about the faith I say ‘keep wondering’”, he told them.

“It’s a great time in life when you’ve got the space and intellectual ability to think deeply about things.

“There’s a pressure in our world right now to say those young people with doubts have no faith, they should tick ‘no religion’ in the census and regard themselves as atheists.

“But it’s just not true. They’re not atheists. They’re just working out what matters to them and looking for reasons and a deeper understanding.”

The archbishop said questions and doubts are part of life.

But people should not be left in doubt and disorientation indefinitely, he added.

“If they ask us we’ve got to give them the reasons for our hope and try and show them by our lives that this Gospel thing is really good news.”

The lunchtime discussion at Cathedral House on 13 June was also hosted by auxiliary Bishop Anthony Randazzo.

They were joined by representatives from university Catholic chaplaincies and Sydney Catholic Youth to inform them of post-school opportunities and support.

In welcoming the students, the archbishop said he would represent them when he attends the Synod of Bishops in Rome in October.

“If you got to speak to the Pope and bishops of the world about what you want or hope for from the Church, what would you say if you were me?” he asked them.

Asked how the Church would screen future priests to prevent a recurrence of sex abuse by clergy as revealed by last year’s Royal Commission, the archbishop said that many things such as psychological screening and better spiritual direction have already been put in place.

“The Church was not uniquely cursed in this area but there’s no doubt this has been a very ugly chapter in our history, where just one case of this occurring is far too much and there were hundreds and thousands of cases.

“And when it was apparent, people didn’t deal with it or it was dealt with very badly.

“So I think if we’re going to regain people’s trust they have to be convinced we’ve owned up to this problem that has happened in the past, are determined to get it better, and to never let it be repeated.”

“It was refreshing to be able to listen to the archbishop talk to us, just sit with us, really allowing us to ask the pressing questions on everyone’s mind and take that from here to our school communities and share that with everyone,” she said.

Aiden Moore, student leader at De Salle Revesby, agreed it was great that the church leader was so open to answering even controversial and provocative questions from young people.

Jason Truong, liturgy prefect at Patrician Brothers Fairfield, said the visit to Cathedral House was better than he had expected.

“His Grace was very warm and hospitable and it was enjoyable to have him learn our perspectives on our faith and how we want to pursue it in the future,” he said.

“I got to learn more about myself as well through what he had to say.  And it was good to hear the perspectives of people from the different schools.”

Organised as one of the Year of Youth activities, the event was the final of three lunches for senior students of Sydney Catholic Schools hosted by the archbishop since May.